The Queen's Plate may be the highlight of the Canadian racing calendar, but the Plate undercard also featured some competitive racing action. The weather was hot and humid making for a grueling day for both horse and spectator alike.

The Grade 2, $250,000-added Nearctic Handicap featured older horses sprinting six furlongs on the very firm E.P. Taylor Turf Course at Woodbine. Defending champion Nuclear Debate was back, although he has had a tough year since then, going winless since his Nearctic win last year. Despite this, he was assigned the high weight of 131 pounds, but was respected by the betting public, going off at 5-2 in the field of eleven. Sent off as the lukewarm 2-1 favorite was local hope Soaring Free, representing the perennial powerhouse Sam-Son Farm. The Mark Frostad trainee came into the race off a two-race winning streak in allowance competition, but over the main track.

When the gate opened, 37-1 longshot Relaunch Star was quickest of all, getting the initial quarter mile in a blistering 21.92 seconds with another longshot, Chris's Bad Boy close behind in second. Soaring Free pressed the pace three wide under Todd Kabel, in third early. Midway on the turn, Kabel urged Soaring Free to the lead, as the two early pacesetters could not maintain the advantage, getting the half in 44.35. Turning for home, Eibar Coa aboard Nuclear Debate made his bid, also going wide. Down the lane, Soaring Free opened up a 2 1/2 length advantage, with Nuclear Debate in second and Patrick Husbands, aboard 12-1 shot Solitary Dancer, gaining with every stride, having been as far back as eighth on the backstretch. In the final furlong, Soaring Free continued to draw away from the competition, winning by 3 1/4 lengths in a course-record tying 1:07.73. Solitary Dancer outfinished Nuclear Debate for second, by a head.
Results chart Race 6

Trainer Mark Frostad said, "He ran a great race today. We're very pleased with that effort, obviously. He won pretty impressively. We thought he had a great shot coming into the race but it was a tough race. A lot of good horses in this race. We were hoping for a win and it came true."

Jockey Todd Kabel said, "I was looking really forward to riding him on the turf. He showed his strut today and there's a lot more left to be seen of this horse. I was able to get him a good breather around the turn. Even before we hit the turn, I was able to sit on him and wait for my chance to call on him turning for home and that's what I did. He just responded with a big effort." 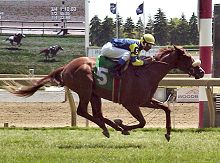 The $100,000-added Charlie Barley Stakes featured three-year-olds going a mile on the turf. Sent off as the 6-5 favorite was Silver Tree, shipping in from Belmont Park for trainer Bill Mott off two straight wins, although he hadn't run since April at Gulfstream Park. However, local hope Moonshine Hall, the 3-1 second choice, closed from ninth place early to win by 1 1/2 lengths in a time of 1:33.27 under jockey Patrick Husbands. Winning owner Eugene Melnyk said, He's well-bred for the grass. He's a little green. He's been running all over the track down in Kentucky. Bringing him out here, Patrick (Husbands) did a great job. He settled the horse down, he was in the middle of the pack and it was all over 50 yards away (from the wire). We were cashing tickets then." 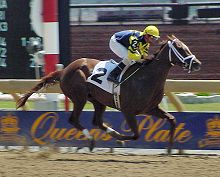 The $100,000-added Sweet Briar Too Stakes featured older fillies and mares sprinting seven furlongs on the main track. 4-5 favorite Harmony Lodge drew off to win by 5 1/2 lengths under jockey Eibar Coa in a time of 1:22.07, giving owner Eugene Melnyk his first of two stakes wins on the card (the next race was the Charlie Barley). Trainer Todd Pletcher's assistant Ginny Dipasquale said, "She's just a wonderful horse and gives 110 per cent every time. We just love her down at Belmont. It's probably in her heart and in her head. She just wants to be a winner. That's just her. She's just a great horse." 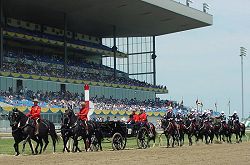 This year the royal representative was Her Excellency the Right Honourable Adrienne Clarkson, the 26th Governor General of Canada. As per tradition, she arrived via a landau carriage accompanied by the Royal Canadian Mounted Police Equitation Section. 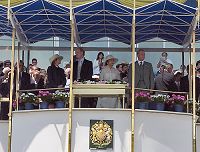 The royal box on the finish line where the honoured guests watch the races. 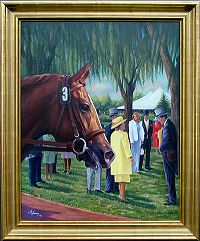 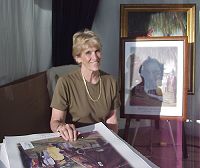 This year they had an official painting for the Queen's Plate which you could buy as a print, mug, or t-shirt. The painting (right) is by local artist Myfanwy MacDonald (left). 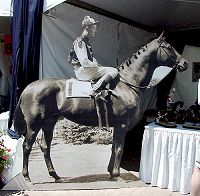 Seabiscuit was quite prominent with this life size stand-up, free temporary tattoos, and hats and shirts you could buy. 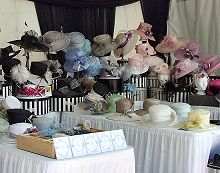 Like the Kentucky Derby, fancy hats are a popular accessory at the Queen's Plate. If you didn't have one, you could always buy one at the track! 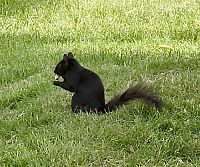 One of the many black squirrels who live in the willows in the Woodbine walking ring enjoys a peanut.