Kicking off Woodbine's Festival of Racing was Saturday night's North America Cup, the 20th running of the prestigious 3-year-old colt pace, now the richest harness race in Canadian history with its purse of $1,542,500. A field of nine were behind the starting gate (scratched down from an originally drawn field of ten plus one also eligible), with Allamerican Native sent off as the 11-10 favorite under the reins of top local driver Chris Christoforou.

When the field was sent underway, 7-2 second choice Allamerican Theory quickly went to the front and got the first quarter mile in 26 1/5 seconds, with the favorite Allamerican Native and the longshot Execujet in hot pursuit. Christoforou, gunning for the lead, got Allamerican Native there as the field entered the backstretch, while Daniel Dube sent his 13-1 shot Quarter Carat out wide to pass horses on the clubhouse turn and settled in second, the favorite getting the 1/2 in 53 2/5 seconds and 3/4 in 1:21, straightening for the drive home. At the top of the stretch, Allamerican Native was 1 1/4 lengths clear of Quarter Carat, who by this point was tiring badly and would eventually finish eighth.

With a furlong left to go, Allamerican Theory came back from his stalking trip in third to get up for second, while 5-1 shot Artesian joined in the cavalry charge, taking third place himself. But it was 4-1 third choice Yankee Cruiser, back in seventh early and double parked out wide around the final turn, who came on strong down the center of the track to pass five horses in the final 200 yards to get up for the victory by a head in a final time of 1:49 3/5. Allamerican Native and Artesian dead-heated for second, and it was another head back to fourth place Allamerican Theory. 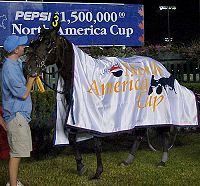 Yankee Cruiser with his winner's blanket. Trainer Tim Pinske, who took over the training duties when his son Brian passed away in November, said, It means an awful lot to me, especially in Brian's memory. All the staff on this stable has been remarkable. We went through this winter. The staff just really stepped up to the plate. We have all of Brian's people in place. I just stepped in to be like a second-string quarterback to help with the x's and o's." Driver Magee added, "I think somebody was watching out for us, Brian. I really wanted to win this race for him. This was his horse. He stuck with me all through last year when he could have had anybody drive this nice horse. This was for him." 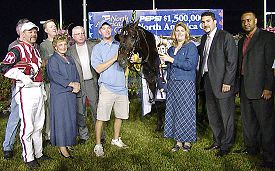 The winning connections celebrate the victory. "I'm very emotional right now," said driver Dean Magee, celebrating his first win in his first Cup drive. "I can hardly speak. Of course, I'm out of breath from having to drive old 'Cruiser' down the stretch. Going into the last turn, I didn't think it looked too good. My cover didn't really take me up as close as I wanted to me. I wound up three wide all the way around the last turn. I had a long ways to come. He dug in and did it for me. I'm so proud of that little horse. He's just really a nice horse. I love him." 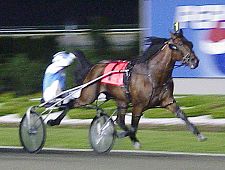 Favorite Allamerican Native, still leading in deep stretch, finished second in a dead heat. His driver Chris Christoforou said, "He raced like a tiger. It's disappointing to lose when he raced like that, but after I watched the replay and saw where Yankee Cruiser came from - three deep early in the last turn - that's a heckuva performance. If I couldn't win it, I'm happy that the Pinske's did." 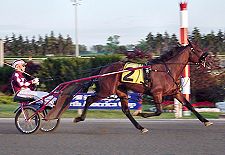 Co-second place finisher Artesian warming up earlier in the card. His driver Mike Lachance said, "I wound up getting the perfect trip. "I'm really happy. I was third on the rail in the last turn and at the top of the stretch I had a clear shot. I just couldn't get there." 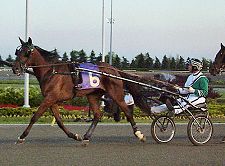 On the undercard of the North America Cup was the $607,300 Elegantimage Stakes for 3-year-old trotting fillies. 3-1 second choice Southwind Allaire, under the reins of Chris Christoforou, closed from sixth early to win going away by 2 1/4 lengths over even-money favorite and stablemate Filly At Bigs who broke stride in the final yards of the stretch drive after briefly gaining the lead. The final time was a stakes record equalling 1:54 2/5. Trainer Jimmy Takter, who trains the first two finishers, said, "I really thought that either Filly At Bigs or Southwind Allaire had a very good chance to win this race. Filly at Bigs is a great filly and she had to go the harder trip of them both. With these kind of fractions you need a little cover through the turns and that helped Allaire. They raced hard, both those fillies. [Southwind Allaire] is not a very big horse but she really has the heart, she's a fighter. She's one of those horses that really never gives up. She has the speed and the willingness that great horses have."
Results chart Race 9 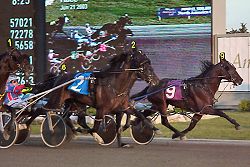 Also on the undercard was the North America Cup Consolation, a $100,000 race for the horses that did not qualify for the main event. 5-1 third choice Wolfdancer Mindale (#2 on the left) closed from fifth early and taking a wide trip on the far turn to win by a head over 5-2 second choice Arts Chip, in a time of 1:51 2/5. 3-2 favorite Mt. Vernon Hanover finished third. Winning driver Mike Saftic said, Everything worked out fine. I’m thinking second-over in here. There’ll be enough speed up front to keep the fractions honest and that’s what happened. I was happy to get the cover up the backside. You know, a second-over trip is supposed to be the perfect trip. But the cover stalled early in the turn. I had to come three-high around. This colt worked hard to get the job done today"
Results chart Race 4