A full field of 17 went to the post in the 140th renewal of Canada's premier race for 3 year olds, the Queen's Plate. Gustav Schickedanz stole the show by winning not only the Queen's Plate with Woodcarver but also the Grade 2 Nearctic Stakes with the long shot Clever Response. The victory was the first Queen's Plate win for local top rider Mickey Walls. Long shot Gandria came back from a fourth place finish in the Canadian Oaks to rally for second. Frank Stronach sent a 3 horse entry including his second place finisher from the Canadian Oaks but the best he could manage was third with the Bobby Frankel trained Euchre.

The day was marred by a nasty breakdown in the 10th race. Receive the King was to be Mickey Walls next mount but he took off to attend to the post Queen's Plate interviews and Emile Ramsammy picked up the mount. He was near the lead when he broke down, unseating Ramsammy and sending him for a nasty spill. Receive the King had to be euthanized and Ramsammy was listed in stable condition with a broken collar bone and fractured right knee. 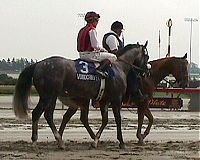 The horses break from the gate in the 140th Queen's Plate.

The horses pass the post for the first time with Great Defender on the lead and eventual winner Woodcarver on the rail. 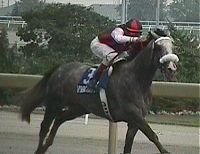 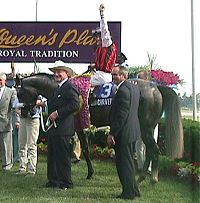 The happy connections with their winner.

The trophy presentation for the 140th Queen's Plate 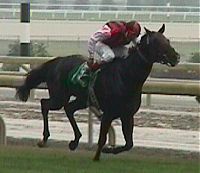 Clever Response winning the Grade 2 Nearctic Stakes earlier in the card. He is also owned by Gustav Schickedanz and trained by Michael Keogh but the winning jockey here was Emile Ramsammy. Results Chart