The $1 million Queen's Plate is Canada's equivalent of the Kentucky Derby. Contested on Sunday at the Derby distance of 1 1/4 miles over the main track at Woodbine, it is the first leg of the Canadian Triple Crown, and this year was the first time the race, celebrating its 148th renewal, was contested over the new Polytrack surface. Only eight of the originally drawn field of nine 3-year-olds went to post this year, after 2006 champion juvenile Leonnatus Anteas was scratched on Saturday due to illness. As expected, Plate Trial winner Jiggs Coz was sent off as the 5-4 favorite, coming into the race off a 3-race winning streak all in stakes company. Also in the field were 7-2 second choice Daaher, shipping in from Belmont from the barn of Kiaran McLaughlin off a maiden win in his last start, and 4-1 Marchfield, runner-up in the Plate Trial representing the powerful Melnyk Racing Stables and trainer Mark Casse.

When the gate opened, 17-1 Alezzandro was hustled to the lead by jockey Todd Kabel, and 9-2 fourth choice Twilight Meteor stalked him a length off the pace for the first six furlongs under John Velazquez, through fractions of 23.66, 47.74, and 1:12.51. Emma-Jayne Wilson aboard 15-1 shot Mike Fox stalked the pace three-wide just behind those two, while favorite Jiggs Coz stayed close up in fourth. Around the far turn, Twilight Meteor tired and dropped out of contention as Kabel asked Alezzandro for run. Alezzandro quickly opened up a 1 1/2 length lead with a 1/4 mile to go, having run a mile in 1:37.48. At the 1/8 pole Alezzandro looked home-free having pulled away to a 2 1/2 length advantage. However, Mike Fox, still third at this point, switched leads, found another gear, and shot through the hole between Alezzandro and Jiggs Coz to win by just 1/2 a length in 2:05.45 over the fast Polytrack. It was 1 1/4 lengths back from Alezzandro to favorite Jiggs Coz in third, and 2 1/2 more to Daaher in fourth. 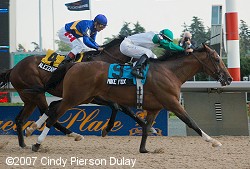 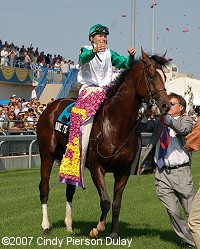 Emma Jayne Wilson celebrates by tossing flowers from the winner's blanket in the air. Wilson, the first female jockey to win the Queen's Plate, said, "We started to lose some ground (around the far turn). (Jiggs Coz) made a good move on the outside of me, and I was getting a little worried. I looked up and saw Kabel sitting quite easy on Alezzandro. I said, Oh, geez buddy, we've got to dig in deep. A little tougher run than what we did on that Wednesday night. He gave me just another spurt, just past the 1/8 pole. I just buried my head and kept on driving and out of nowhere, I knew we flying. It was unbelievable. He wanted it just as bad as I did. I knew I had it. He was moving so strong coming at the wire." 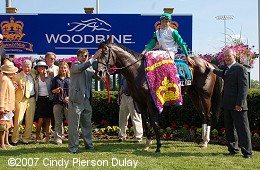 Mike Fox in the winner's circle with trainer Ian Black on the far right. Black, also celebrating his first Plate win, said, "It is a wonderful feeling, I am honored to be part of Emma's great day, and for (owner) Morgan Firestone, to have a horse like this, to get a Plate win with a home bred. I was concerned there (around the far turn), but I knew he would run all the way, so if anybody stopped in front of him, he would keep running. (Owner Firestone) spent a lot of money throughout the years, buying yearlings and this is very nice for him. It is out of the fillies he bought and raised and is very rewarding for him. So, it is nice to win with a homebred." 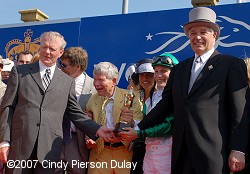 The Honourable James K. Bartleman Lieutenant Governor of Ontario, the Queen's representative for this year, presents the Queen's Plate trophy to the winning connections. Jockey Emma-Jayne Wilson said, "When we first broke, past the wire for the first time I was tickled pink to be where I was. I wasn't sure what the pace was going to be like with Alezzandro, being a young horse as he is. I wasn't sure if he was going to show the same kind of speed he had in the Plate Trial. Twilight Meteor being right there, I had a beautiful stalking trip, exactly where I wanted to be, under a nice hold, like he was in the last race we ran." 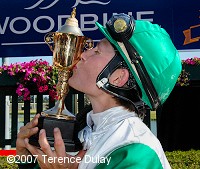 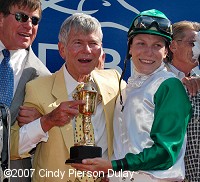 Right: Owner D. Morgan Firestone and Emma Jayne with the trophy after the race. 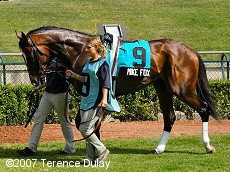 Mike Fox in the walking ring before the race. 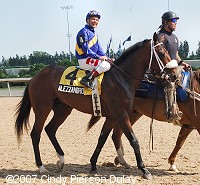 Second place finisher Alezzandro in the post parade. His jockey Todd Kabel said, "My horse's ears were pricked the whole race with me, I was quite happy the way he settled in. The other night, (trainer Kevin Attard) decided, if (Alezzandro) puts us (on the lead), leave him alone. He had me there the whole race. He was running comfortable. The last 1/16 mile got to us. He is a lightly-raced horse, and all three races came in a short period of time. Kevin and his crew did a tremendous job to have this horse ready for today. He is a big, robust horse too, and he's only going to get bigger and stronger." Trainer Kevin Attard added, "He ran a big race. It's tough to get beat that way. Todd (jockey Kabel) is a great rider. He gave him a great ride. What can I say? It was the third start in his life." 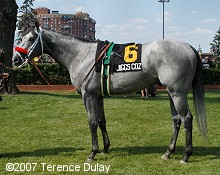 Third place finisher and beaten favorite Jiggs Coz strikes a pose in the walking ring before the race. His jockey David Clark said, "I had no horse at any time. He was never there today. I don't know why. (I felt that) when we got to the wire the first time."