Scatter the Gold proved Todd Kabel made the right decision when choosing him over stablemate Strike Smartly when he broke his maiden in the $1 million Queen's Plate. The talented son of Mr. Prospector out of Canadian Triple Crown winning mare Dance Smartly rallied against a speed favoring track to win going away by 4 1/4 lengths in a pedestrian 2:05.53. As expected the speedy Wake at Noon lead for the first mile setting nice fractions of 1:11.48 for 3/4 and 1:38 for a mile, but faded to 5th at the end as Scatter the Gold and I and I rallied up from the back. For Our Sake was second through most of the race but was only able to hold third. Allende, by another Canadian Triple Crown winner, rallied up for 4th. The favorite was Pete's Sake but he never showed much interest and was eased in the stretch. Longshot Colebrook Lake, a last minute entry, flipped in the gate and had to be scratched by the vet. This victory gave sire Mr. Prospector a rare Kentucky Derby - Queen's Plate double.

The field of 16 breaking from the gate in the 141st running of the Queen's Plate. 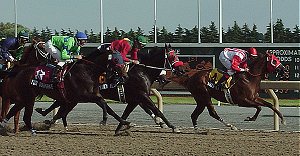 The field goes by for the first time with Wake at Noon in the lead and Tricky Hearts in second. 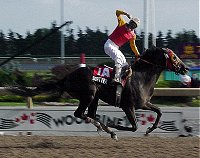 Scatter the Gold all alone out front at the finish. Jockey Todd Kabel said: "I wanted to stay on the outside with him and I pretty much got to be where I wanted to be for the whole race. I had a perfect trip." 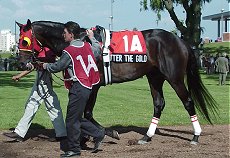 Scatter the Gold in the walking ring before the race. 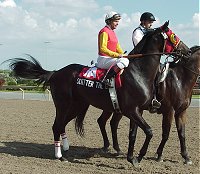 Scatter the Gold in the post parade. His trainer Mark Frostad said: "This victory does not surprise me. The last race was really the first time he showed any interest in running. He seems to have figured it out now and hopefully he is on the right trail." 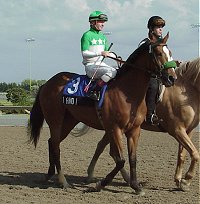 Winter book favorite and eventual second place finisher I and I in the post parade. His jocky Jim McAleney said: "He stood up to the pressure and handled everything really well. We just weren't good enough to beat him today." 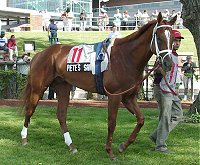 Plate Trial winner and 3.25-1 favorite Pete's Sake in the paddock prior to the race. He was never in contention and was eased after a mile. His jockey Patrick Husbands said: "He wasn't injured - He was okay, but after that [first] bend, I just had no horse left. 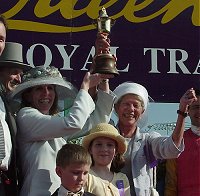 The late Ernie Samuel's daughter Tammy Samuel-Balaz (left) and his widow Liza Samuel (right) accepting the trophy in his memory. Liza said: "It feels wonderful. I know that Ernie is right here with me today and he couldn't be more excited or happy and thrilled as I am." 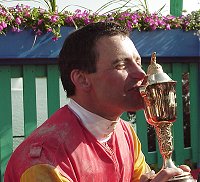 This victory was Todd Kabel's second win in the Queen's Plate. He said: "It's a tremendous feeling. Just winning one was the big thrill of my life (1995 on Regal Discovery), now there's two and I'm looking forward to trying for three." 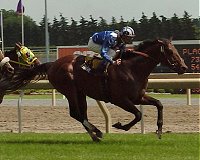 The undercard featured the Grade 2 Nearctic Handicap at 6 furlongs on the turf. The favorite was the Todd Pletcher trained Gone Fishin at 2-1 but he finished second to 8.5-1 Neil Drysdale trained Kahal. Winning jockey Brice Blanc said: "I knew by the eighth pole that I could get it. He hadn't given me all he had. He really picked it up when I asked him."
Results Chart 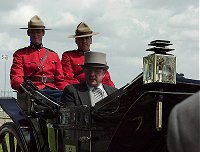 The Queen's representative at the race was the Honourable R. Roy McMurtry, Chief Justice of Ontario. Here he is arriving in the Landau coach on the turf course.