On Sunday July 4 a field of 13 Canadian-bred 3-year-olds raced 1 1/4 miles over the Polytrack at Woodbine in the 151st running of the $1 million Queen's Plate Stakes, the oldest continuously-run stakes race in North America and the first leg of the Canadian Triple Crown. Her Majesty Queen Elizabeth II and the His Royal Highness the Duke of Edinburgh, Prince Philip were in attendance for the fourth time, after visits in 1959, 1973, and 1997. Contestants and the estimated crowd of 30,000 endured very warm conditions with a race-time temperature of 89 with a heat index of 99, and a 15 mile an hour headwind in the stretch gusting to 22. Mobilizer was sent off as the 7-2 favorite off his runner-up finish in the Plate Trial, despite only having 1 win in 4 lifetime starts. In to challenge the Frank Stronach homebred included 4-1 second choice Roan Inish, one of two fillies in the race, exiting a win in the Woodbine Oaks for breeder Robert Costigan , and 5-1 third choice Big Red Mike, winner of the Plate Trial last out for breeder Terra Farms.

Exiting the chute, jockey Eurico Rosa da Silva sent Big Red Mike down to the rail and to the lead, and he was joined to his outside by 6-1 fourth choice Hotep . The pair dueled on the front end through easy fractions of 24.43, 49.39, and 1:14.31, while 10-1 Dark Cloud Dancer and favorite Mobilizer contested third another 1 1/2 lengths back. Entering the stretch, the front pair continued to battle, getting the mile in 1:38.74. Roan Inish, who was 8th early under jockey Davy Moran, came through between horses for the drive but the front two took full advantage of the slow early pace. Big Red Mike kicked away to win by 1 1/2 lengths over Hotep in 2:04.89 while Roan Inish was another 1 1/4 lengths back in third. Favorite Mobilizer finished a disappointing 10th. 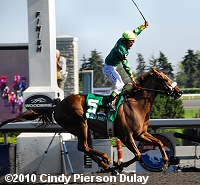 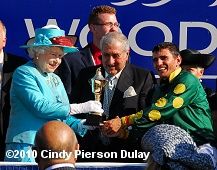 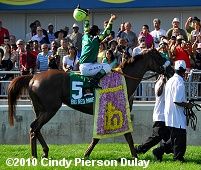 Left: Her Majesty Queen Elizabeth II presents the Queen's Plate trophy to owner Dom Romeo and jockey Eurico Rosa da Silva. Da Silva, the first jockey to win consecutive Queen's Plates since Craig Perret in 1992-1993, said, "He was very relaxed. Even during the race I tried to talk to him and say, 'Baby, relax my friend.' I was galloping along pretty easy around the first turn. When Hotep pressed me, I just tried to nurse him along, and I had a lot of horse turning for home. I was so happy to meet (the Queen). It was a great feeling. Winning the Queen's Plate is a great feeling, but having her here was special."

Right: Big Red Mike parades for the fans after the race. It was very hot and he started having trouble from the heat and did not go into the winner's circle. His trainer Nick Gonzalez, winning his first Queen's Plate in his first attempt said, "He's a fighter. He showed that when he won the Plate Trial, and he moved forward after he won that race. He looked like he was going pretty comfortable all the way round. He didn't get a real lot of pressure. When they came to him, I knew he'd dig in and fight them off, and that's exactly what he did." Asked if he would go next in the Prince of Wales Stakes, Gonzalez said, "I'm a Fort Erie boy and they told they're going crazy in the grandstand there. That's where Mike got his early training when he came to Fort Erie in the early stages of his career so it'll be like a kid going home." 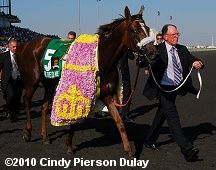 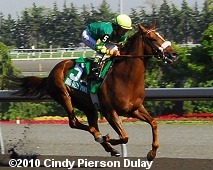 Left: Co-owner Frank Romeo leads Big Red Mike over to be hosed off after the heat started getting to him. Frank's father and majority owner Dom Romeo said, "This will probably be one of the most memorable days of my life. I have been 35 years in racing and breeding. I bred this horse, which makes it much more satisfying. Our hopes are always to win the Queen's Plate and the Queen being here is magnificent. It's very exciting. I saw that he was a fighter in the Plate Trial. He showed me something that day." Big Red Mike is named after Frank's 24-year-old son (Dom's grandson) Mike, who is taller than most of the family and has red hair. 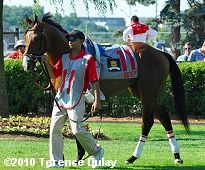 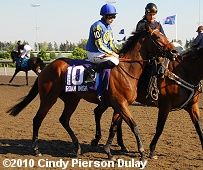 Left: Second place finisher Hotep in the paddock before the race. His jockey Patrick Husbands said, "He ran a good race. My horse is bred to go far. Four furlongs out I was right there with Eurico (aboard the winner). He had so much horse. You can't take that away from my house, he tried his best. In his works my horse trains aggressive the first quarter and then he's relaxed. He relaxed but a better horse beat him today."

Right: Third place finisher Roan Inish in the post parade. Her jockey Davy Moran said, "She ran well. I thought turning in she had a good chance. She lost her action a little bit turning in. I got a bit of a bump and she turned sideways a bit. She just didn't pick up from that." 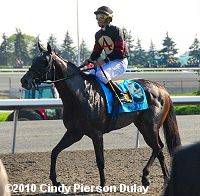 Left: Tenth place finisher and beaten favorite Mobilizer returns after the race. The 7-2 favorite contested third place early under regular rider Jono Jones, but tired on the far turn and dropped back late to finish 10th beaten 16 1/4 lengths at the line. The Roger Attfield trainee has a record of 1 win, 2 seconds, and 1 third in 5 starts, earning $90,010 for owner-breeder Frank Stronach.

Right: The entire field for the 150th Queen's Plate shortly after the start with Big Red Mike out front and Hotep behind him in second. They stayed this way for the entire race.