Queen's Plate Day is one of the biggest racedays of the year at Woodbine, and with Queen Elizabeth II and Prince Philip in attendance for the first time in 13 years, the track saw one of its largest crowds in recent memory, estimated at around 30,000, with all reserved seats sold out and general admission seating plus the apron packed with fans. Those who came out were also treated to two other stakes races on the undercard, both run over the E.P. Taylor Turf Course which is outside of the main Polytrack oval. After a lack of rain for several days, sunny skies, temperatures in the upper 80s on race day, and a breeze out of the west, the turf course was very firm leading to fast times. 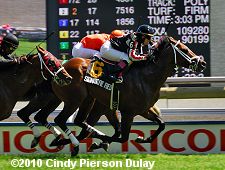 The first stakes race on the card was the $200,000 Highlander Stakes (G2) presented by Ricoh, a 6 furlong sprint on the turf for older horses. Field Commission was sent off as the 2-1 favorite in the field of 7 off a close second in the Connaught Cup (G3). In to challenge him included 5-2 second choice Signature Red, an allowance winner last out after finishing 3rd in the Vigil (G3), and 4-1 third choice Jungle Wave off a 3rd place finish in the Connaught.

Jockey Javier Castellano sent 7-1 Heros Reward to the lead soon after the start and he was stalked to his outside by Signature Red through fast early fractions of 22.50 and 44.94. Into the stretch, Signature Red passed the pacesetter gaining a short lead to set up a duel to the line. Heros Reward fought back but Signature Red dug in late to prevail by a neck in 1:08.17 over the firm turf. It was just 1/2 a length back to late-running Jungle Wave third, while favorite Field Commission was fourth.
Results Chart 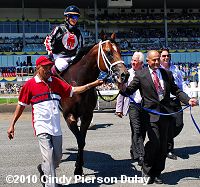 Left: Trainer Sid Attard leads Signature Red to the winner's circle. Attard said, "He ran his guts out. There was no way he was going to let that horse go by him."

Right: Signature Red with his large group of connections in the winner's circle. 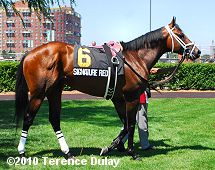 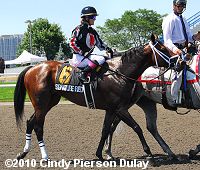 Left: Signature Red in the walking ring before the race. Regular rider Chantal Sutherland stalked the early pace then took over the lead for good at the 1/8 pole. With his first stakes win, he improved his record to 5 wins, 1 second, and 4 thirds in 12 starts, earning $344,209 for owner Norseman Racing Stable. 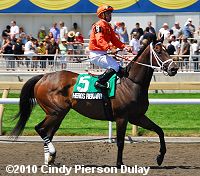 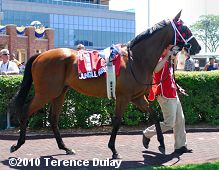 Left: Second place finisher Heros Reward returns after the race. The 7-1 fifth choice was competing in the Highlander for the fourth year in a row, finishing 2nd in 2007, winning in 2008, and finishing 3rd last year. He set the early pace under regular rider Javier Castellano, then gave up the lead in mid-stretch but held on to finish second. The Dale Capuano trainee improved his record to 12 wins, 9 seconds, and 5 thirds in 38 starts, earning $264,209 for owners Rob Ry Farm and Jayne Marie Slysz.

Right: Third place finisher Jungle Wave in the paddock before the race. The 4-1 third choice raced in midpack 3rd under new jockey Patrick Husbands, gained on the leaders late but was unable to improve position, finishing 3rd beaten just 3/4 length. The Sid Attard trainee improved his record to 7 wins, 1 second, and 4 thirds in 17 starts, earning $537,630 for owner Tucci Stables. 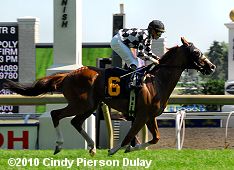 Immediately after the arrival of Queen Elizabeth II, a field of 9 older horses contested the $150,000 Singspiel Stakes (G3) at 1 1/2 miles, one complete lap of the E.P. Taylor Turf Course. The race's namesake, 1996 Canadian International and 1997 Dubai World Cup winner Singspiel, was euthanized on July 1 at the age of 18 at Sheikh Mohammed's Dalham Stud after battling laminitis. Spice Route was sent off as the 3-2 favorite, making his first start of the year after finishing 2nd in the W.L. McKnight (G2) at Calder in December. In to challenge him included 5-2 second choice Forgotten Dynasty, 5th in the Monmouth Stakes (G3) last out, and 7-2 third choice Perfect Shower, last year's Breeders' Stakes winner and an allowance winner last out. 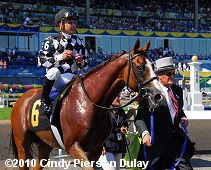 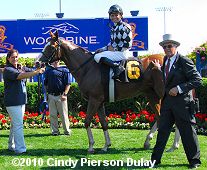 Left: Trainer and co-owner Roger Attfield leads Spice Route to the winner's circle. Attfield said, "He ran well, didn't he? I thought maybe I was two works short of having him at his very best but he proved me wrong. I knew he'd run well if he was tight enough. I'm very pleased with him. He grabbed a heel really badly in Florida and it took a long time to grow in. But he's in fine shape now and hopefully we'll have a great year from here on in." 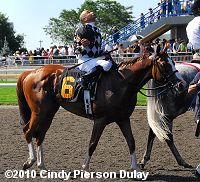 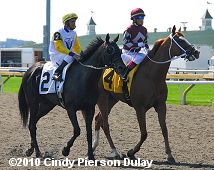 Left: Jockey Mike Smith celebrates as Spice Route returns after the race. Smith said, "He felt great the whole time. Roger told me not to hit the front too soon. He was going to be a little bit fresh, just cover him up and make that one run. Off a six month layoff, you've got to hand it all to this guy (Attfield)."