On Sunday afternoon, a field of 12 Canadian-foaled 3-year-olds raced 1 1/4 miles over the Polytrack at Woodbine in the 154th running of the $1 million Queen's Plate Stakes, the oldest continuously-run stakes race in North America and the first leg of the Canadian Triple Crown. The day looked promising early on, with cloudy skies and temperatures in the high 70's, but rains came before 4PM and persisted through the feature race, with visible puddles on the racing surface. Despite the poor weather, the all-sources handle on the 12-race card was a record $9,739,879, shattering the previous record $8,768,101 set in 2011. Up With The Birds, winner of the Marine Stakes after finishing a close second in the Transylvania (G3) at Keeneland, was sent off as the 8-5 favorite. In to challenge him included 5-1 second choice Nipissing, winner of the Woodbine Oaks after finishing third in the Selene (G3), and 6-1 third choice Dynamic Sky, winner of the Plate Trial Stakes. 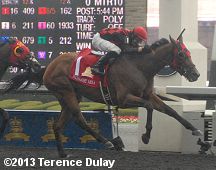 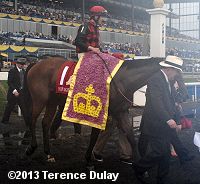 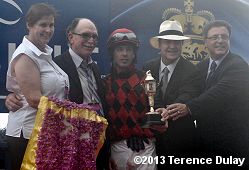 Left: Midnight Aria heads to the winner's circle. Winning trainer Nick Gonzalez, celebrating his second Plate win, said "When he took on three at the 3/8 pole and did that comfortably I felt pretty good about our position at the time. Carlo and Lou Tucci have been in the business forever and are the best owners you could ever have. They've paid their dues and have a passion for the sport. Anytime one of their horses got injured they found them a good home. They ae very deserving and deserve everything they got here today."

Right: The winning connections pose with the trophy, from left to right: Martha Gonzalez, trainer Nick Gonzalez, Jesse Campbell, co-owners Carlo Tucci and Lou Tucci. Lou Tucci said, "My uncle and I have been chasing this dream for over 40 years and it's hard to express what you feel when that dream comes true. It's like the 7th game of the Stanley Cup final and scoring the winning goal, times a thousand. The day he won at Gulfstream (Feb. 16) I thought he had the potential to go 1 1/4, maybe 1 1/2 miles. 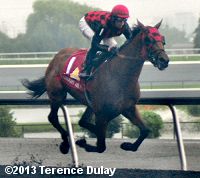 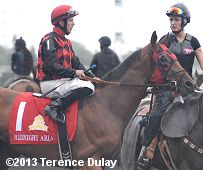 Left: Midnight Aria leads first time by. Jockey Jesse Campbell, celebrating his first $1 million stakes win, said, "He was praying for rain and he danced long enough for it to rain. He was the speed on paper. I didn't see the clock but I'm pretty sure we did (go 48 seconds for 1/2 mile). I could see Up With The Birds coming, I could feel him, so I was praying for the wire. I've been looking forward to this for many years. I've liked (Woodbine) since I got here; I got here 2 weeks before my wife and I told her to hurry up because I fell in love with this place." 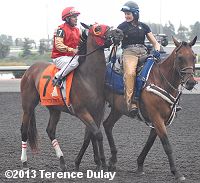 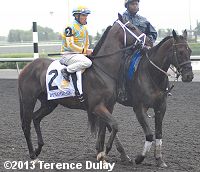 Left: Second place finisher Up With the Birds in the post parade. Jockey Eurico Rosa da Silva said "I had a dream trip. Everything opened up for me but (Midnight Aria) got away from me. In this rain, with his speed, I was really scared of the pacesetter. I moved my horse early to try to get a little closer but we couldn't get there. He ran very well, I can't complain, another horse ran better."

Right: Third place finisher Dynamic Sky in the post parade. Jockey Joel Rosario said, "I had a good trip. He took me a little closer to the pace but I didn't think they were going that fast. It was had to beat the horse on the lead, he kept on going. I came up to him a little bit on the turn but he kept going. Everytime we came to (Midnight Aria) he had another gear."