The post positions for Sunday's $1 million Queen's Plate Stakes were selected during a special breakfast ceremony on Thursday morning. Connections, media, and officials gathered in the trackside tent instead of the walking ring due to rainy weather. This year marks the 154th edition of the Plate, the oldest continuously-run stakes race in North America, which at run at 1 1/4 miles over the Polytrack at Woodbine Racetrack in Toronto. The Plate is the premier race for Canadian-foaled 3-year-olds and the first leg of the Canadian Triple Crown. Colts and geldings carry the standard weight of 126 pounds while fillies Nipissing and Spring in the Air each get a 5 pound allowance.

In what has become an annual "state of the industry" address, Woodbine chairman and CEO Nick Eaves spoke about the changes being felt by the racing and breeding community in Ontario. A year ago he stated that the 2012 edition may be the last Queen's Plate ever, with the possibility of Woodbine closing for good. However, since the resignation of then-premier Dalton McGuinty, the ruling Liberals under new premier Kathleen Wynne appear to want to save the industry, or at least work with it, but not by simply going back to the previous formula where tracks and horsemen simply took a cut of slots revenue, with no real incentive to improve the racing product. Eaves sounded cautiously optimistic, but confident that live racing at Woodbine and the Plate would continue for years.

Selection order is determined using a double-blind random draw of numbered pills and entry forms. This year, newly inducted Hall of Fame trainer and 8-time Queen's Plate winning trainer Roger Attfield assisted Racing Secretary Steve Lym and track announcer Dan Loiselle in drawing the order. Of his Plate winners, he said he was the most confident with 1990 Triple Crown winner Izvestia, while 2008 winner Not Bourbon was the most challenging, described as a natural sprinter who he had to stretch out to 10 furlongs. Asked to pick a winner this year, he chose the filly Nipissing, trained by his former assistant Rachel Halden.

The likely favorite, listed at 2-1 on the morning line, is Sam-Son Farms homebred Up With the Birds who won the Marine Stakes by 4 3/4 lengths last out and has never been worse than third in 6 career starts. Trainer Malcolm Pierce, who got to select first, took post position number 7. Eurico Rosa da Silva, who won the Queen's Plate in 2009 and 2011, will be aboard the son of Stormy Atlantic. Asked if he felt added pressure saddling the favorite, Pierce said, "I'd rather be 2-1 than 20-1. He's breezed every week in great order and he's good enough for Sunday. He'll be ways back, 8th or 9th and will make one big run."

Trainer Rachel Halden, who got to select 7th, took post 9 for 7-2 second choice Nipissing. The daughter of 2004 Queen's Plate winner Niigon won the Woodbine Oaks last out. Regular rider Steve Bahen will be in the irons on Sunday for owner-breeder Chiefswood Stable. Halden said, "She's just very level-headed, very classy. She usually stands out on the track with my pony but she can stand there for half an hour if needs be. I was very happy with her half-mile work, galloped out in a minute in change (5f) and out in 1:14 (6f)." Owner Bob Krembil, asked about the possibility of winning his second Plate (his first was with Niigon), said "They're both good (horses), we'd like to win this one too! We'll need pace, position."

The 4-1 third choice is Plate Trial winner Dynamic Sky. Trainer Mark Casse, who has a total of 4 horses entered in the Queen's Plate, selected next to last for him and took post 2. North America's leading rider Joel Rosario will be aboard for the Plate, attempting to be the third jockey (since Bill Hartack in 1964 and Kent Desormeaux in 1998) to win the Kentucky Derby and Queen's Plate in the same year. Casse said, "This horse gets in trouble all the time in his races so I think Joel is a good fit for him. I thought (the Plate Trial) was good, but he's going to have to be better to win this."

Post time for the Plate will be 5:38pm ET on Sunday July 7 and the race will be televised on CBC in high definition from 4:30 - 6:00. The full card will be simulcast to many locations throughout North America, and be broadcast on TVG in America and HPI in Canada. The Plate will be carded as race 10, while there are 4 stakes races on the undercard. The stakes quintet begins wih the Clarendon Stakes for Ontario-bred juveniles at 5 1/2 furlongs (race 3), followed by the Dance Smartly (G2) for older fillies and mares at 1 1/8 miles on the turf (race 6), the Singspiel (G3) for older horses at 1 1/2 miles on turf (race 8), and the Highlander (G2) for older horses sprinting 6 furlongs on turf (race 9). Below are the entries for the 2013 Queen's Plate with post positions, morning line odds, trainer, jockey, and a link to a full profile from Woodbine. Free past performances are available here from BRISnet.com (scroll about 3/4 of the way down and look under Spring at Last.) 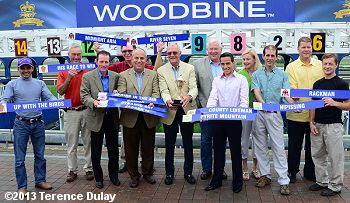