Queen's Plate Day is one of the biggest racedays of the year at Woodbine, attracting the biggest crowd of the year. Those who filled the grandstand and the apron on Sunday afternoon and endured heavy rains were treated to four additional stakes races on the undercard and helped set a record Plate day handle of $9,739,879. Although the sun came out on Plate day early in the card, it started to rain heavily before the Singspiel, quickly downgrading the turf from good to yielding for that race and causing the Highlander to be moved to the main Polytrack after further rain downgraded the course to very soft with standing water in some areas. 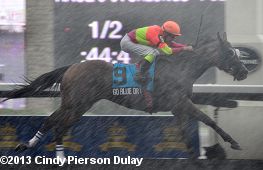 The $200,000 Highlander Stakes (G3) presented by Pizzaville, a 6 furlong sprint on the turf for older horses, was moved off the turf to the Polytrack at the last minute due to the torrential rains and downgraded from a Grade 2 to Grade 3. Something Extra was sent off as the 2-1 favorite in the field of 11 off his win in the Connaught Cup (G2), over 7-2 second choice Go Blue Or Go Home, winner of the Karl Boyes Memorial Stakes at Presque Isle, and 13-2 third choice Night Officer, winner of the Around the Cape at Belmont before finishing third in the Jim McSorley at Monmouth.

Jockey Luis Contreras sent Go Blue Or Go Home to the lead exiting the chute and he set fractions of 22.08 and 44.88 while stalked by Something Extra and 17-1 Fatal Bullet. Entering the stretch, Go Blue Or Go Home pulled away from the field, opening up by 4 lengths through 5/8 in 57.11, and cruised past the post 5 1/4 lengtsh ahead of 23-1 Super Chunky in 1:10.46. It was another neck back to 21-1 Dan the Tin Man, while favorite Something Extra faded to finish 7th beaten 9 1/4 lengths.
Results Chart 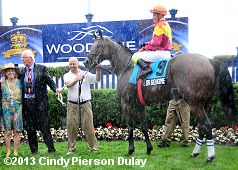 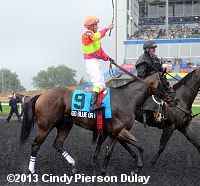 Left: Go Blue Or Go Home in the winner's circle. The 7-2 second choice went gate to wire for trainer Reade Baker, improving his record to 5 wins, 0 seconds, and 0 thirds in 7 starts, earning $273,084 for owners Jim and Susan Hill.

Right: Jockey Luis Contreras celebrates aboard Go Blue Or Go Home as he returns after the race. 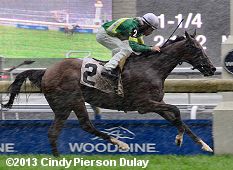 Immediately after the arrival of Governor General David Johnston, a field of 9 older horses contested the $150,000 Singspiel Stakes (G3) at 1 1/2 miles, one complete lap of the E.P. Taylor Turf Course. Forte Dei Marmi, winless since last August and coming off a 9th place finish in the Dixie (G2) was sent off as the 6-5 favorite over 7-2 Perfect Timber, making his stakes debut after an allowance win, and 5-1 Aldous Snow, fourth in an allowance last out. 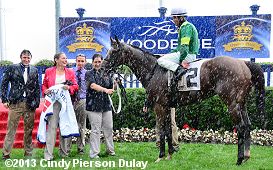 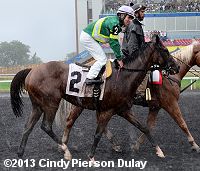 Left: Forte Dei Marmi in the winner's circle. The 6-5 favorite raced 5 lengths off the pace early under new jockey Joel Rosario, then took over at the 3/16 to win going away. The Roger Attfield trainee improved his record to 8 wins, 1 second, and 5 thirds in 30 starts, earning $736,156 for owner Stella Perdomo. 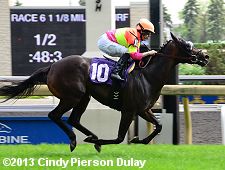 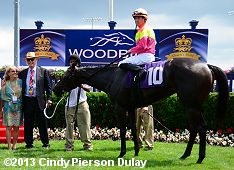 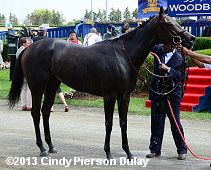 Left: Solid Appeal in the winner's circle. Winning jockey Jesse Campbell, who would go on to win the Queen's Plate later in the card, said, "Wow is all I have to say, she just ran huge. Just like her race six weeks ago, she popped out of the gate running. We weren't going that fast and she was very comfortable. She just traveled so well to the quarter pole and when I asked her, she actually moved quicker than I thought she was going to. I didn't want to make the lead that soon, but thank God I had that much horse. This horse is as confident as a horse can get."

Right: Solid Appeal gets hosed off after the race. She was having a bit of trouble with the heat and had to be hosed off several times. 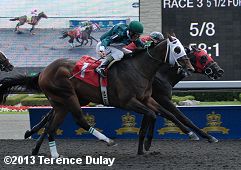 Kicking off the stakes action on Plate day was the $150,000 Clarendon Stakes for Ontario-bred 2-year-olds sprinting 5 1/2 furlongs on Polytrack. Debut winner Go Greeley was sent off as the 3-10 favorite in the field of 7 over 6-1 Spin the King, second in his debut, and 7-1 Bold'n Golden, winner of his debut then third in the Victoria Stakes last out. 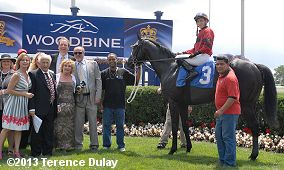 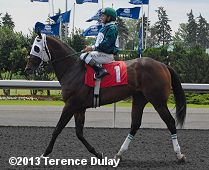 Left: Spin the King in the winner's circle. Jockey Luis Contreras said, "He was game. He was so nice and relaxed early. When he felt the horse on the outside, he just tried to fight back, all heart."