Woodbine's $1 million Queen's Plate Stakes, Canada's equivalent of the Kentucky Derby, is the first leg of the Canadian Triple Crown, and is the oldest continuously-run stakes race in North America. A contentious field of 13 went to post in the 147th running of the 1 1/4 mile classic over the main track, with a guaranteed purse of $1 million (Canadian). A good crowd was on hand despite a strike and picket lines by mutuel workers at all the track entrances. The strike is not over wages, but over hours and benefits and while they chose this time to strike, hoping the track would cave in due to the Queen's Plate, they will likely be out for a long time as there are many automatic betting machines to take up the slack during the strike. Because of the strikers blocking the entrances, the royal representative was not able to attend, taking away some of the traditional pomp and pageantry of the Plate.

Mike Pegram's Wanna Runner, trained by Bob Baffert, was sent off as the 3-2 favorite off his two derby wins in the US at Sunland Park and Lone Star Park. Todd Pletcher trainee Sterwins shipped in from Monmouth Park and was sent off as the 4-1 second choice off a 10-length romp when breaking his maiden last time out. Leading the local contingent was Frank Stronach's Malakoff, third choice at just over 4-1, winner of the Marine in his final prep.

When the gate opened, jockey John Velazquez sent Sterwins to the front right away out of the 5 post, and he rounded the clubhouse turn battling with Malakoff through quick early fractions of 22.73 and 45.98 over the fast main track. Favorite Wanna Runner stalked the pace out wide while 16-1 longshot Edenwold also settled into a good stalking position but taking a ground-saving path along the rail. Down the backstetch, Sterwins continued to hold onto the lead through 6 furlongs in 1:11.28, with Edenwold closing the gap with every stride. Rounding the far turn, Wanna Runner began to fade out of contention, eventually finishing a well-beaten tenth, while Edenwold passed Sterwins on the inside to grab the lead at the top of the stretch, after a mile in 1:37.99. The pair dueled through the stretch but Edenwold would not be denied, prevailing by 3/4 length in a time of 2:05.30 for the 1 1/4 miles over the main track. It was a long 4 lengths back to Malakoff in third, who just nosed out the late-running 19-1 Ascot Bill in fourth.

Edenwold is trained by Josie Carroll who became the first ever female trainer to win the Queen's Plate. It was the second Plate win for jockey Emile Ramsammy, who won in 1996 aboard Victor Cooley. Edenwold was the 2005 champion 2-year-old colt in Canada and because the first juvenile champ sine 1977 to return and win the Queen's Plate at age 3. 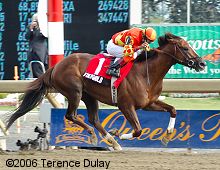 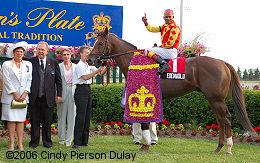 The happy connections in the winner's circle. Owner James Sapara said, "I thought it was a real strong field. Mr. Pegram ( Owner of Wanna Runner ) had real strong horse and I thought, he was going to be a tough one to beat, so I had no allusions going into this race. It's nice not to be the favorite, so I was pretty calm and relaxed. My wife ( Alice Sapara ) told me the horse was going to win, as she told you when they selected the numbers that she was going to win. I couldn't be that sure. Josie ( Carroll ) I know was pretty sure that she got this horse ready. She did a commendable job, she is a wonderful conditioner." 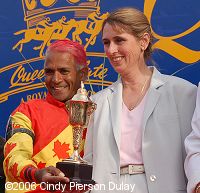 Jockey Emile Ramsammy, who dyed his hair to match the silks, and trainer Josie Carroll, first woman trainer to win the Queen's Plate, with the trophy. Ramsammy said, "At the three-eighths pole, I glanced over and my opposition wasn't much of a threat at the time. They were all scrubbing quite a bit. I thought the Stronach horse was going to come with a big kick. He was up early, so I thought when he was done, he was over. I guess about ten jumps later, I really felt comfortable." 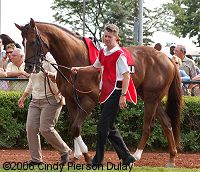 Edenwold in the paddock before the race. Trainer Josie Carroll said, "At the start of the year there was some question, would he or wouldn't he (get the distance). After his last race, I had tremendous confidence in this horse. He rallied at a mile and an eighth and we thought we have a shot." She continued, "The fractions were so fast, I was getting concerned, the horse looked comfortable all the way, when they turned for home, and he picked it up, I said, you know what, we are going all the way." 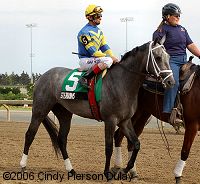 Second place finisher Sterwins in the post parade. Trainer Todd Pletcher said, "We thought Sterwins ran a huge race. For only his third lifetime start, we were very pleased with his effort." Pletcher said he would start next in the Prince of Wales Stakes. "That would be the plan right now, assuming that he comes back well and trains well between now and then." 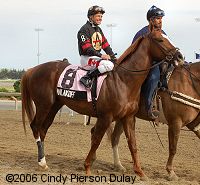 Third place finisher Malakoff in the post parade. His jockey Todd Kabel said, "I thought we were going a tick slower, but, that is not the point. I was well positioned, the other two in front kept on rolling, that was the spot to be in today. My horse didn't kick today, I was done pretty early." 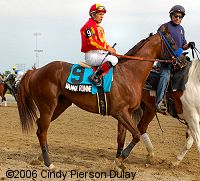 10th place finisher and beaten favorite Wanna Runner in the post parade. His jockey Victor Espinoza said, "I think on the first turn…I was empty by that time and I still had a long way to go. It surprised me. I thought he was going to run better than that. He's a racehorse. What are you going to do? Sometimes they feel good, sometimes they don't run any good." Trainer Bob Baffert added, "It's the first time he's ever thrown in a clunker like that. Victor said at the five-eighths pole, he acted like a horse that might have bled. We're going to scope him. I don't know if he just got stirred up or what. Physically, he said he felt alright, but exhausted."