The Queen's Plate is Canada's oldest and most important race. It is to Canada what the Kentucky Derby is to the United States, the Prix de l'Arc de Triomphe is to France, and the Melbourne Cup is to Australia. With this in mind, there was much going on at Woodbine besides just the feature race. Unfortunately many of the more interesting scenic pictures with the landau carriage, royal box, and Toronto Mounted Police horses were not available due to the striking mutuel workers blocking the track entrances. 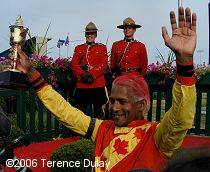 Jockey Emile Ramsammy posed in many ways with the trophy after the race. Here he is with the Mounties in the background. 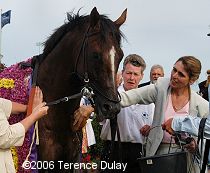 Trainer Josie Carroll sponges off Edenwold to help cool him off before sending him back to the barn. 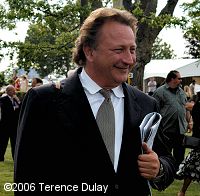 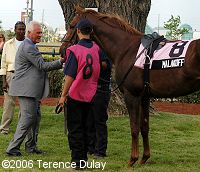 Owner Frank Stronach checks out his horse Malakoff, who finished third, before the race. 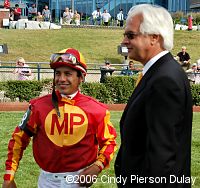 Jockey Victor Espinoza and trainer Bob Baffert in the paddock. They were popular photo subjects and had to do several interviews since Wanna Runner was such a favorite. 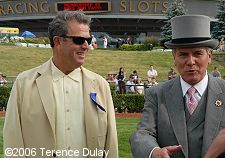 Wanna Runner's owner Mike Pegram and Woodbine CEO David Willmott in the paddock. Willmott made sure to greet every owner in the paddock before the race. 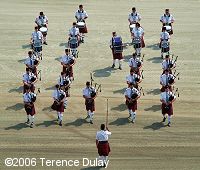 The Toronto Police Pipe Band are another Queen's Plate tradition.