At Woodbine, Queen's Plate week is traditionally kicked off by the annual barbecue. Held on the Monday before the Plate, media, officials, connections, and their families usually gather in the large walking ring to enjoy a delicious outdoor lunch, mostly cooked over open grills and served at one end of the ring, while Queen's Plate contenders are paraded at the other end of the ring. This year the event had to be moved into the trackside tent due to rain earlier in the day, so the horses were paraded on the E.P. Taylor Turf Course in front of the tent instead. This is a great opportunity to see the horses posing with their proud connections, and unlike most events, it is a rare opportunity for the horses' grooms to receive recognition as well when the horse is brought out.

The post position draw for the Queen's Plate will be held on Thursday morning. Post time for the Plate will be 6:07pm on Sunday June 25nd and the race will be televised in Canada on TSN from 5:30 to 6:30pm and simulcast to many locations throughout the United States. Free past performances are available from Daily Racing Form.

At this year's Queen's Plate Barbecue, six of the expected thirteen starters were brought out to be paraded on the turf course. Below are photos of the ones that were there with links to their profiles as well as links to the profiles of the other contenders who were not present. 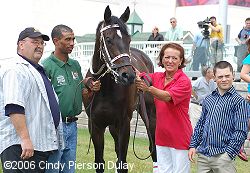 Ascot Bill was escorted by his groom Monica Knowland. Also in the photo are trainer Steve Attard (left) and jockey Justin Stein (right). Attard is one of three Attards with a stake in this year's Queen's Plate. His uncle Sid trains Hot Deputy and his sister Josie is the groom of Shillelagh Slew. 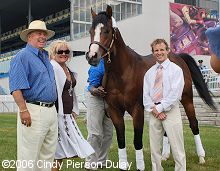 Atlas Shrugs was escorted by his groom Melanie Minshull. Here he is pictured with two of his owners and jockey Corey Fraser (right). Trainer Reade Baker said, "He's taken an edge each time by travelling through on the inside and getting lucky, but her's a tough, nice little horse. However, he's got this nasty little habit at the end of his works (or races). He'll try to run to the outside fence and dump the rider. He did that to Corey after the Queenston." 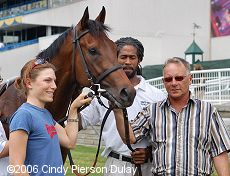 Bridgecut was escorted by his groom Emmanuel Reid-Oxley. Also in the picture are jockey Emma-Jayne Wilson and trainer David Bell. Bell said, "He's a fine little horse. he can be a little tough too. He's got some temperment to im. He can be a nice guy. He'll just turn on you in a second. That's kind fo what makes him a racehorse." 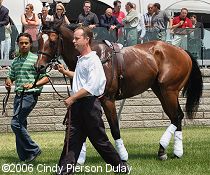 Thinking Out Loud was escorted by his groom John McTague. He is also trained by David Bell who said, "The virus went through my barn really hard. He never got sick, his blood (counts) were never bad and he never coughed, but I'm not sure he that he didn't get just a touch of it. He shouldn't have any problem with 1 1/4 miles. (His pedigree) is set up that way." 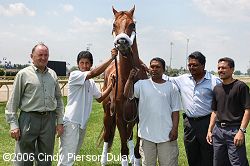 Cifercat was escorted over by his groom Abraham Siddo. Also in the picture are owner Bruno Schickedanz (left), trainer Abraham Katryan (2nd right), and jockey Richard Dos Ramos (far right). Katryan said, "He loves to train. he likes to save energy coming for home whenever he works. He's always got something left and he always comes home a happy horse." 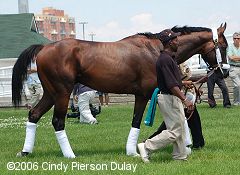 Shillelagh Slew was escorted over by his groom Josie DePaulo. He won his 2006 debut in April, but caught a virus and has not started since. His trainer Michael DePaulo said, "It kind of scred us up, him getting sick. In the perfect world, we would have run him in the Marine and then the Plate. But that didn't happen." DePaulo also added, "He loves to eat bannanas. he can't get enough of them."

All the Queen's Plate probable starters: