On Thursday morning, post positions for Sunday's $1,000,000 Queen's Plate were selected in the large, tree-shaded walking ring at Woodbine during a special breakfast ceremony. This year marks the 147th running of the Queen's Plate, Canada's premier race for 3 year olds at a mile and a quarter and the first leg of the Canadian Triple Crown. The Queen's Plate is also the oldest continuously run stakes race in North America. Like at the Kentucky Derby, selection order is determined using a random draw of numbered pills. After a five minute discussion period, the connections come up and choose their post position by hanging their colors on the board.

This year the honorary drawmaster was Clara Hughes, who is the only Canadian athlete to win multiple Olympic Medals in both the Summer and Winter games. She has medals in both cycling and speed skating from 1996 through 2006. She is also very active in the Right to Play charity and has raised over $400,000 so far help bring sports to disadvantaged children throughout the world.

This year's royal representative will be the Honourable James K. Bartleman, The Lieutenant Governor of Ontario, who will present the trophy to the winning owner.

Post time for the Plate will be 6:07pm on Sunday June 25nd and the race will be televised in Canada on TSN from 5:30 to 6:30pm and simulcast to many locations throughout the United States. Free past performances are available from Daily Racing Form. 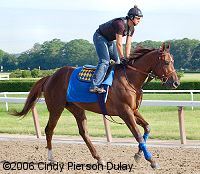 The favourite this year should be Wanna Runner, trained by California-based Hall of Fame trainer Bob Baffert. He is coming off two convincing wins in the Grade 3 Lone Star Derby at Lone Star Park, May 13, and the $600,000 WinStar Derby, April 1, at Sunland Park in New Mexico. Earlier in the year, he finished third to Brother Derek and 2005 two-year-old Eclipse Award champion Stevie Wonderboy in the San Rafael Stakes at Santa Anita on January 14. The Ontario-bred son of El Corredor will be ridden by Victor Espinoza, currently the third leading rider in North America in purses, with over $6.6 million. 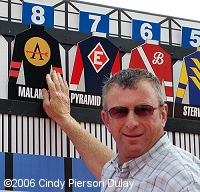 The local hero should be Malakoff, a son of 1999 Belmont Stakes winner Lemon Drop Kid, has also won his last two outings, including the May 20 Marine Stakes at Woodbine. Trained by Brian Lynch, Malakoff hasn’t been worse than third in five career starts. He’ll be seeking a third Plate win for both his owner and breeder Frank Stronach (Basqueian in 1994 and Awesome Again in 1997) and jockey Todd Kabel (Regal Discovery in 1995 and Scatter the Gold in 2000).