Woodbine is well-known as the host track for the Queen's Plate, North America's oldest continuously-run stakes race, but it is also known for its 1 1/2-mile E.P. Taylor Turf Course, used for the Grade 1 Atto Mile, Canadian International, and E.P. Taylor Stakes held later in the year. The Queen's Plate undercard featured three stakes races all run over this famous course and with the sun out and no rain all week, the course was very firm and times were fast as expected. 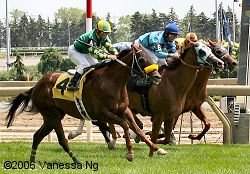 Kicking off the stakes action on Sunday afternoon at Woodbine was the $200,800 Scotts Highlander Stakes (G3), a six furlong sprint on the lawn for older horses. A field of seven went to post, with Australian-bred Man of Illusion sent off as the 5-4 favorite off his win in the Churchill Downs Turf Sprint on Kentucky Oaks day. 7-1 shot Langfleur set a brisk pace of 21.94 and 44.49 down the backstretch and around the clubhouse turn, then 12-1 shot Marco Be Good came out three-wide, collared the leader at the top of the stretch, and was all-out in deep stretch to hold off the late charge of 5-2 Atticus Kristy to prevail by 1/2 a length in 1:07.87, only 1/5 off the track record. It was just 1/2 a length back to 6-1 Sophia's Prince in third. Man of Illusion was wide throughout and showed nothing in the stretch to finish fifth.
Results Chart from DRF. 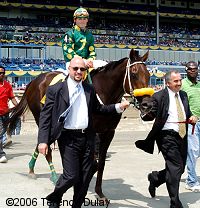 Marco Be Good is led to the winner's circle by his owners. Trainer John Ross said, "We never had a chance to run on a good, firm turf. I think that was part of the reason we wanted to give this horse a try in these kind of conditions. Even today, we were debating whether we should keep him in or take him out. We made the right decision. I just loved the way in the last two races he's come out with confidence. It came out today, too." 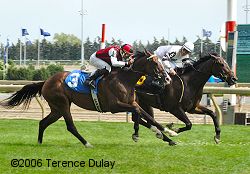 The $100,000 Singspiel Stakes saw six older horses travel the marathon distance of 1 1/2 miles, one complete circuit of the course. Kentucky invader Pellegrino was sent off as the even-money favorite over 8-5 local hope Jambalaya. 9-1 shot As Expected took command early and set a reserved pace of 24.31, 49.37, 1:13.67, and 1:37.67 while remaining 1 1/2 lengths clear of the pack down the backstretch. Pellegrino stalked the pace out three-wide while Jambalaya rated between horses back in fifth. Rounding the far turn, As Expected dropped out of contention while Jambalaya surged through to take the lead after 10 furlongs in 2:02.51. Through the stretch, Jambalaya held a 1 1/2 length lead with a furlong to go and then held off the late charge of 12-1 shot Last Answer to win by just a neck in 2:27.15. It was a long 6 3/4 lengths back to 8-1 Diplomatic Agent in third, and another 3 3/4 to favorite Pellegrino in fourth.
Results Chart from DRF. 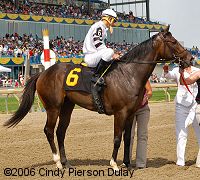 Jambalaya heads for the winner's circle. Jockey Jono Jones said, "Everything worked out great. I think I moved a little early. It almost cost us. My horse started loafing at the end of the race but he still won." 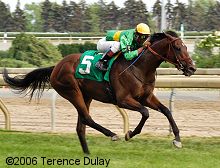 In the nightcap, nine three-year-olds went to post in the $100,000 Charlie Barley Stakes over a one-turn mile. Seaside Retreat, 10th in the Kentucky Derby and winner of the Lane's End Stakes at Turfway in March, was making his first start since Churchill Downs and was sent off as the 4-5 favorite over 4-1 shot French Beret. 10-1 outsider Artagnan was quickest from the gate and led the pack down the backstretch through fractions of 23.40 and 46.68. Rounding the turn, Artagnan tired from the fast pace allowing French Beret to take over the lead after 3/4 in 1:11.23. However, Seaside Retreat was just hitting his best stride. Having settled off the pace in seventh early, he split horses entering the top of the stretch, and surged ahead with a furlong to go, drawing away to win by 4 1/2 lengths in a time of 1:34.21. Only a nose separated runner-up French Beret and 27-1 outsider Moka Jumbie in third.
Results Chart from DRF. 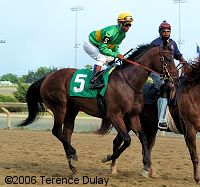 Seaside Retreat in the post parade before the race.