History was made at Woodbine on Sunday as Dancethruthedawn captured the 142nd edition of the Queen's Plate Stakes. The royally bred daughter of 1991 champion Dance Smartly emulated her dam's feat by winning both the Woodbine Oaks and the Queen's Plate, the fourth filly to do so, and she is only the fifth Plate winner to be foaled by a Plate winner. It was the first time a full brother/sister have won back to back Plates. Her sibling Scatter The Gold having won the 2000 edition.

At the start of the race, 82-1 longshot Sik was sent to the front to set the early pace with Stronach Stables' 12-1 entry Brushing Bully battling with him to his outside flank through an initial quarter in 23.45 seconds. 2-1 second choice Dancethruthedawn stalked the pace 2 lengths behind the leaders as the field rounded the clubhouse turn. After a half mile run in 47.32, Sik was done and gave way to Brushing Bully and Dancethruthedawn, eventually fading to a last place finish. Brushing Bully held off the filly until the turn, through 3/4 of a mile in 1:12.37, but couldn't hold the lead into the stretch. 4-5 favorite Win City, who was allowed to settle in 5th place down the backstretch, made his move on the turn, gaining 3rd at the top of the stretch. Dancethruthedawn poked her head in front at the quarter pole, after a mile in 1:37.88, and opened a length lead early in the stretch. Win City was gaining on her with every stride, having collared the tiring Brushing Bully inside the final furlong, but under steady pressure by jockey Gary Boulanger, Dancethruthedawn held off the late closer for the 1/2 length win in a final time of 2:03.78 for the 1 1/4 mile event over a fast track.

The field passes by for the first time with Sik and Brushing Bully on the lead followed by Dancethruthedawn and Thatsthebottomline. Sik's jockey Jockey Daniel David said, "My horse came out of there on the bit looking to run. I didn't want to be there. He set himself up as a rabbit. Down the backside I was just out of horse." 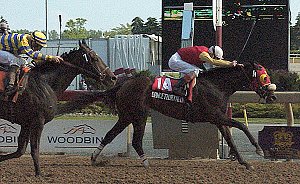 The finish of the Queen's Plate with Dancethruthedawn holding off the late move of Win City. Win City's jockey Constant Montpellier said, "We ran pretty much according to plan. We sat comfortably, like we have in almost every race and I could see that Dancethruthedawn was in front of us. At the three-eighths pole, I could see that she was just cruising, so I tried to gain on her slowly and she just always had the jump on us. He gave her everything he had, he kicked in like he has been doing and he just couldn't go by the filly. She ran a big race today." 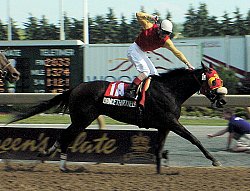 Gary Boulanger celebrates his first Queen's Plate win. He said: "She showed today she's the real package. I'm just glad to be a part of the team. I was yelling, crying all at the same time after the wire. I don't think it's completely sunken in yet. It's a great feeling, just unbelievable." 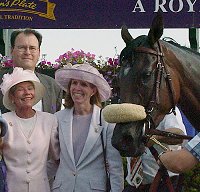 The Sam-Son Farm ladies, Liza Samuel, Tammy Samuel-Balaz, and Dancethruthedawn, enjoy their Queen's Plate victory. Tammy Samuel-Balaz said: "This is unbelievable. To have Dance Smartly win it and to have her daughter win it, there's nothing like it. It was amazing last year to have this family continue on (Scatter the Gold won the Plate) and (Dancethruthedawn) was a filly Dad never got to see in person. I wish he was here because this epitomizes what he tried to and has done with the breeding program. He'd have been so proud. I'm so proud. It's unbelievable." Her father, Sam-Son founder Ernie Samuel, passed away last June. 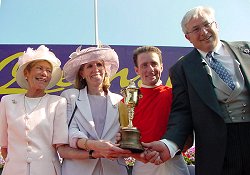 The Sam-Son Farm team with the Queen's Plate trophy: Liza Samuel, Tammy Samuel-Balaz, Gary Boulanger, and Mark Frostad. Trainer Mark Frostad, winning his third Plate, said: "He (Boulanger) wanted to get clear and just drop in a little bit. He stayed there until the half-mile pole or so and then she started to kick on. He knew Win City would be coming behind him and I think he wanted to get the jump on Win City. She certainly got the mile and a quarter with no problem." 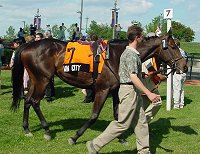 Second place finisher and post time favorite Win City in the walking ring. Trainer Bob Tiller said, "Obviously we're disappointed. We got beat a half length. The five pound allowance beat us. I'm very proud of my horse. You have to give the filly credit. We couldn't beat her today but our trip wasn't as perfect as hers. I was second again. It's been 26 years since I was second so check with me in another 26 years. It's horse racing. You have to accept it." 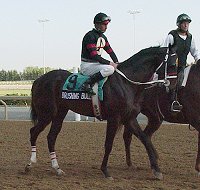 Third place finisher Brushing Bully in the post parade. Jockey David Clark said, "He ran well, really well. He ran as well as he could, he's maybe not as good as the two that beat him, but he ran his heart out. I can't fault him today." 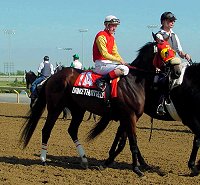 Dancethruthedawn in the post parade. Jockey Gary Boulanger said: "I couldn't have asked for a better trip. The race was just perfect for me. She got away a lot better today than she did in the Oaks. She had me in exceptional position. It was just a matter of when I pushed the buttons. I waited till just inside in the five-sixteenths pole." 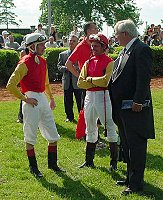 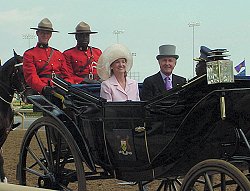 This year the Queen's representative was the Honourable Hilary M. Weston, Lieutenant Governor of Ontario. As is the custom, she arrived in a horse-drawn landau carriage. She was accompanied by her husband Mr. Galen Weston and escorted by the Royal Canadian Mounted Police. 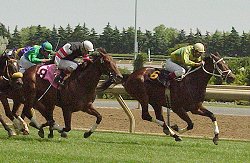 On the undercard was the Grade 2 Nearctic Handicap, a 6 furlong turf event for older horses. 4-5 favorite Texas Glitter was unable to wire the field, fading in the stretch to sixth place. 9-1 shot Mr. Epperson beat Airbourne Command by a neck after the pair had stalked Texas Glitter for the entire trip, with late closer Alea Iacta Est 3/4 lengths back in third. Winning jockey James McKnight said, "We were hoping to get a good stalking position and he's got the kind of speed that allows you to do that. The race shaped up into the turn the way I thought it would, (Texas Glitter) had the speed and went onto the lead and we sat right behind him and were able to kick in down the stretch where we needed it." Results Chart 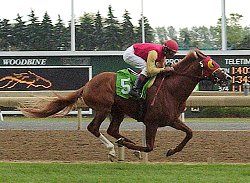 Also on the undercard was the Charlie Barley Handicap at 1 1/16 miles on turf. 3-5 favorite Strut The Stage lived up to his name, drawing off to a 7 3/4 length win. Jockey Todd Kabel said, "He's very special and I think it was just that he was heads and tails above this group. I'm hopeful we're going to see this colt in the Atto Mile, we'll have to talk to (owner Sam-Son Farm) about that, but he's a very good horse." Results Chart