The 146th edition of the Queen's Plate, the first leg of Canada's Triple Crown, was contested at Woodbine on Sunday afternoon June 26. A contentious field of nine (down from the originally drawn 10 when Runnaway Mon scratched the morning of the race) went to post in this 1 1/4 mile classic over the main track, with a guaranteed purse of $1 million (Canadian).

As expected, Sam-Son Farm hopeful Dance With Ravens, who finished first in the Plate Trial but was disqualified in that event, was sent off as the lukewarm 2-1 favorite over 3-1 second choice Wild Desert, the "mystery horse" who had not started since finishing 8th behind Afleet Alex in the Arkansas Derby in April. Pat Valenzuela, who was aboard Wild Desert at Oaklawn, got the assignment for trainer Bobby Frankel who was not in attendance. Labatt Woodbine Oaks winner Gold Strike, the lone filly in the field, was the 7-2 third choice in the wagering.

Under sunny skies and temperatures in the upper 80's, the field broke well from the gate, with 50-1 longshot Granique, breaking from the rail, getting to the front with Gold Strike angling in to challenge him right away. The pair battled through a quarter in 23.86 and a half in 48.36, before Granique dropped from contention to an eventual sixth place finish. The filly inherited an uncontested lead going into the far turn, through 3/4 in 1:13.96 as jockey Jim McAleney tried to conserve some energy for the stretch run. At the quarter pole, Gold Strike was 3 lengths clear through a mile in a slow 1:39.98, but the closers were moving fast. McAleney hugged the rail to save ground as Rafael Bejarano aboard 6-1 shot King of Jazz and 3-1 second choice Wild Desert, with Pat Valenzuela, came out wide around the turn to challenge her for the lead. Gold Strike stubbornly held onto the lead with a furlong to go, as Wild Desert came through the narrow opening between she and King of Jazz. Gold Strike bore out and bumped Wild Desert into King of Jazz, but this had no effect on the result. King of Jazz gained a slight lead with a sixteenth to go but Wild Desert dug in and shook him off to get the win by just 1/2 a length in a time of 2:07.37 for the 1 1/4 miles. It was 3 3/4 lengths back to Gold Strike in third. Favorite Dance With Ravens inexplicably failed to fire, taking a wide path throughout while settling in sixth early, but flattening out through the lane finishing seventh. The most surprising result was 54-1 longest shot Molinaro Beau, still a maiden, who raced well back of the pack for most of the trip, trailing the lead by as many as 10 3/4 lengths, but closed willingly through the stretch to grab fourth place money. 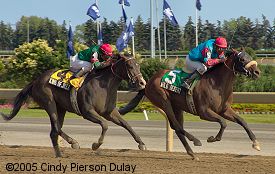 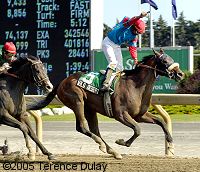 Pat Valenzuela celebrates winning his first Plate in his first try. He said, "It was no trouble really. Going by the stands the first time, he was very relaxed behind the field. I was biding my time along the inside through the backstretch. He inched very comfortably around the turn. There was a little bit of traffic. I weaved my way through it. Through the stretch, (there was) a little bit of trouble. (Gold Strike) veered out a little bit and brushed my horse. But my horse went about his business and prevailed at the end. He was drawing away at the finish." 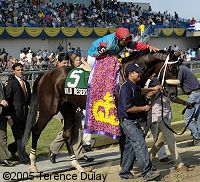 Wild Desert being paraded for the fans. Winning co-owner Dan Borislow said, "It was a race that I wanted to win. Joe Torre got involved through the New York connection - there are four partners from New York. Keith Jones has been a partner for about six or seven years and he just happens to be a part of the Canadian section. I thought 'Pat Valenzuela was on the horse and if anybody could get through, he could be the man to do it,' and he did it." 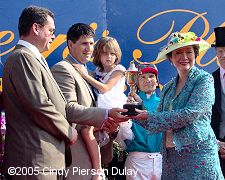 Governor General of Canada, The Right Honourable Adrienne Clarkson presents the Queen's Plate trophy to the winning connections. Co-owner Keith Jones (shown here holding his daughter) said, "It was a big thrill to be back home in Canada. To top it off with a victory here at the Queen's Plate is an unbelievable feeling. With Pat Valenzuela on the horse and knowing how great this horse is, I felt very comfortable. It didn't matter where the horse was positioned in the early going, I knew that (when) Pat Valenzuela saw his opening, he would (send) his horse (through) and he sure did that. What a great feeling it was watching him coming down the stretch. We knew that this horse has fantastic closing ability. There is no way that I could ever imagine it. I don't think I like it that much, sitting up there being nervous before a race. It sure feels great after it is done." 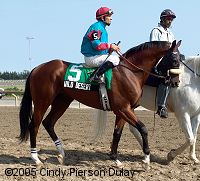 Wild Desert in the post parade. Jockey Pat Valenzuela said, "I remember in Arkansas he got really hot in the paddock. This time he was really cool, he looked like he'd put on 150 pounds, looked and felt really strong, he moved really well, warmed up really well. He was just a totally different horse, an improved horse." 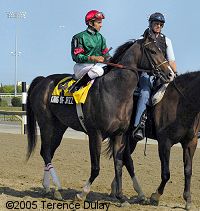 Second place finisher King of Jazz in the post parade. His jockey Rafael Bejarano said, "He stayed really comfortable, in good position. There wasn't too much speed. I tried to stay close. I chirped to my horse to stay ready to go. When I asked him, my horse was coming really strong, but (Wild Desert) he was coming too - he's a really nice horse. My horse, he ran good. He tried." 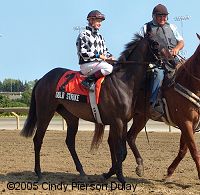 Third place finisher Gold Strike in the post parade. Her jockey Jim McAleney said, "I really thought no one was going to catch her because she was running so easy. She's such a brilliant filly and I think unfortunately - and it's nobody's fault - it's the way the races unfolded - two weeks back took a toll today. Down the stretch, I felt sorry for the filly. She's giving me 100 per cent and she wanted to win. My heart was going out to her. When those horses started coming to me into the turn, I was comfortable. But once we got inside the five-sixteenths pole, I moved my hands on her and I knew I was in trouble. She didn't get beat because she chose to, she didn't get beat today because she didn't try, she couldn't get it done." 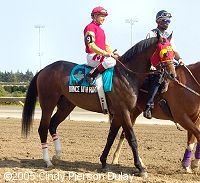 Beaten favorite and seventh place finisher Dance With Ravens in the post parade. He is now out for the year with an injury. Trainer Mark Frostad said, "He has a chip in an ankle, and he'll have to have surgery on it. I knew there was no way he could run that badly unless something had happened. This explains the performance."