On Thursday morning, post positions for Sunday's $1,000,000 Queen's Plate were selected in the large, tree-shaded walking ring at Woodbine during a special breakfast ceremony. This year marks the 146th running of the Queen's Plate, Canada's premier race for 3 year olds at a mile and a quarter and the first leg of the Canadian Triple Crown. Like at the Kentucky Derby, selection order is determined using a random draw of numbered pills. Honorary drawmaster Mike "Pinball" Clemons, head coach of the Grey Cup champion Toronto Argonauts football team, assisted racing secretary Steve Lym and track announcer Dan Loiselle in drawing the selection order.

After a five-minute discussion period, each horse's connections had ninety seconds to come up on stage to select the post, by hanging the owner's colors on the board . During the post position selection process, track announcer Dan Loiselle briefly interviewed the owner or trainer who made the selection. Here the horses in post position order with a link to a profile with more info. Following the list are are some of the comments made by the connections. Free past performances are available from Daily Racing Form. 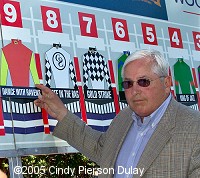 Trainer Mark Frostad chose post 9 for 5-2 morning line favorite Dance With Ravens. Frostad said of his chances, "He's coming up to the race in great shape. If it was a beauty contest I'd be a lot more confident. Unlike his half-brother (2000 winner) Scatter The Gold, who probably never did understand what it was all about, this guy's starting to tune in. He'll certainly get the mile and a quarter. It won't be a problem for him at all. He's very talented, he'll relax, so we'll see." 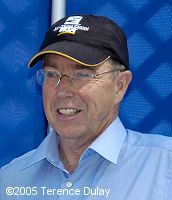 3-1 second choice Gold Strike had first pick and trainer Reade Baker took the 7 hole for the lone filly in the field. Baker said, "It was Jim's (jockey McAleney) choice, so if anything goes wrong it's his fault. We wanted to avoid the inside but not get hung out either. We thought about 6 but with the double loading we didn't want to be sitting in the gate too long. I'm not concerned about the distance, I'm concerned about the time between races. I'd rather have more time. The two weeks really isn't what we want. When she came home (winning the Oaks on June 12), it was awful hot that day, but she's galloped great ever since. We're very hopeful." 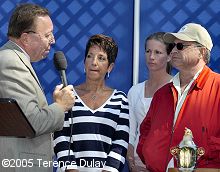 Racing manager Neil Winnick of ownership group Castletop Stable chose post 8 for Three in the Bag, the 4-1 third choice. Winnick said, "We were having trouble getting this horse to rate, but when we came here the other day it looked like he can get the mile and a quarter. Whether he rates or goes to the front will be up to the jockey. He'll play it the way it comes in." 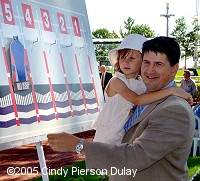 Co-owner Keith Jones and his daughter Adrienne selected post position 5 for Wild Desert. He said, "It's obviously a tremendous challenge (the 10 week layoff) but this is a very good horse with a lot of potential. He's training very well and gained 100 pounds since his last race, the Arkansas Derby, which was a race that we really felt we had a good opportunity to win. Afleet Alex won. He won easily. We changed trainers and we're really excited about his chances but obviously it's going to be a tough task being off as long as he has been. I grew up in Brantford, about an hour away from here, so I'm happy to be back here to win a great race." 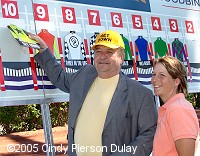 West Point Thoroughbreds' 10-1 hopeful Get Down will break from the outside 10 post. Nancy Triola, hoping to become the first female trainer to win the Plate, said "Between the 3/8 pole and the 1/4 pole (in the Plate Trial), he didn't realize there was another 3/8 of a mile to go, so now this time, he'll be a little more focused. The Queen's Plate is like the Kentucky Derby, and for a woman trainer, why not?" Co-owner Sherman Cunningham added, "He got caught behind those 2 (in the Plate Trial) and ran wide so we couldn't catch him. It's a long way from Springwater, Saskatchewan to here, population 300, where I was born. We're here to Get Down and get it done!"
Post time for the Plate will be 5:07pm on Sunday June 26nd and the race will be televised in Canada and simulcast to many locations throughout the United States.