At Woodbine, Queen's Plate week is traditionally kicked off by the annual barbecue. Held on the Monday before the Plate, media, officials, connections, and their families gather in the large walking ring to enjoy a delicious outdoor lunch, mostly cooked over open grills and served at one end of the ring, while Queen's Plate contenders are paraded at the other end of the ring. This is a great opportunity to see the horses posing with their proud connections, and unlike most events, it is a rare opportunity for the horses' grooms to receive recognition as well when the horse is brought out.

The post position draw for the Queen's Plate will be held on Thursday morning. Post time for the Plate will be 5:07pm on Sunday June 26nd and the race will be televised in Canada and simulcast to many locations throughout the United States.

At this year's Queen's Plate Barbecue, six of the expected nine starters were brought out to be paraded in the walking ring. Below are photos of the ones that were there with links to their profiles as well as links to the profiles of the other three contenders who were not present. 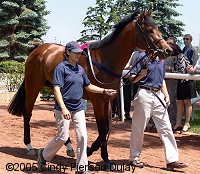 Ablo was escorted by his groom John Attfield. Trainer Roger Attfield said, "He's a very well conformed horse, nicely balanced, good looking. That's why I bought him. He's always been very easy to be around, very easy to train." If he wins, he would give Attfield a record-tying eighth victory in the Queen's Plate. 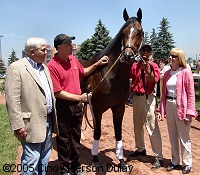 Dance with Ravens should win on pedigree alone with a Canadian Triple Crown winning mother and two Queen's Plate winning half-siblings. Here he is with trainer Mark Frostad, groom Chico Mendoza, and Sam-Son Farm owner Tammy Samuel-Balaz. Frostad said, "He is just more mature and stronger, that's all. He was a nice 2-year-old and he's turned into a very nice 3-year-old. He's pretty even tempered, a pretty nice horse. He's got a lot of talent." 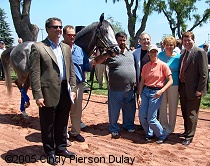 Get Down was undefeated at Woodbine until his loss in the Plate Trial. Here is is with some of the West Point partners along with groom Roger LeBlanc and trainer Nancy Triola (orange shirt). Triola said, "I'm happy with him. He really didn't have a clue. I've been breezing him a full mile, trying to get him to focus for the whole two turns. But it's not the same when you run (in a race). It took him a little while to figure out what was going on. Once he figured it out and Slade (Callaghan) kind of swung him out, he came flying and he only got beat two lengths. It was a learning experience." 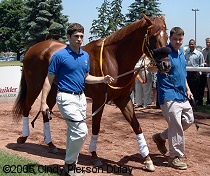 Granique will be taking a big step up in class in the Queen's Plate. He is being escorted by his groom Robert Blacklund. Trainer Alec Fehr said, "What I liked about him as a yearling was his cold stare. He's got a mean look to him." He continued, "He's gotten over his greenness. He's figure it out. He's stil a very playful horse and I don't want to take that away from him. I want him to be happy. He's learned the business." 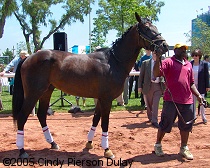 Runnaway Mon is lightly raced with only 3 lifetime starts. Here he is with his groom Dean Barrett. Trainer Mark Casse said, "I'm quite happy with what he's done this year. Everything we've done has been for one reason and one reason only. That's to have him at his best on Queen's Plate day. Everything has gone according t oplan. He still has a lot to prove. He's a true 1 1/4 mile horse in terms of breeding and disposition." 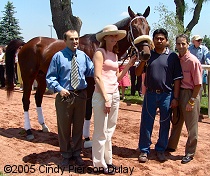 Three in the Bag lost the Plate Trial by a nose only to get the win when Dance with Ravens was disqualified. Here he is with groom Enrique Calva, jockey Robert Landry, and some of his connections. Trainer Stanley Hough
Gold Strike was not at the barbecue, but she is headed for the Queen's Plate next after her impressive win in the Woodbine Oaks. Trainer Reade Baker said, "I was really confident athat we were going places when I got the Ragozin sheet numbers on her because she compares favorably with the best 3-year-old fillies in America. She's vastly superior to the ones that ran last year."

King of Jazz was not at the barbecue but will ship up from Kentucky to make his first start in Canada in the Queen's Plate. Ian Wilkes, assistant to trainer Carl Nafzger, said, "He's been very consistent, very honest. He's a useful Canadian-bred, he fits in there, I think he belongs there. He's pretty versativle. He's a good horse. He doesn't have to have his racetrack. he can run over anything, any type of surface."

Wild Desert was not at the barbecue but will ship in for the Queen's Plate, his first start in Canada as well. He was on the US Triple Crown trail before being hurt in the Arkansas Derby where he was 8th behind Preakness and Belmont winner Afleet Alex. Owner Daniel Borislow said, "He could have raced in the Belmont, but that Afleet Alex is a helluva horse. Coming off a long layoff, sometimes if they run a big effort, they'll bounce. We didn't want to run second in the Belmont when we could be first in the Queen's Plate."