The Queen's Plate is Canada's oldest and most important race. It is to Canada what the Kentucky Derby is to the United States, the Prix de l'Arc de Triomphe is to France, and the Melbourne Cup is to Australia. With this in mind, there was much going on at Woodbine besides just the feature race. 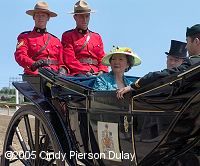 Not only is it one of the richest races in Canada with its $1 million purse, it is the only race in North America in which part of the purse is paid for by the British Royal Family, the amount of fifty guineas. In some years, Woodbine is fortunate to have a member of the Royal Family travel to Toronto to deliver the guineas as well as present the trophy, but most years a representative sits in the Royal Box to represent the Queen. This year the Governor General of Canada, The Right Honourable Adrienne Clarkson, arrived in the royal landau and presented the trophy to winning owners of Wild Desert. It was Clarkson's second Plate visit as the Queen's representative. 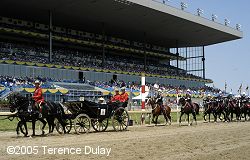 The royal landau arrives escorted by the Toronto Mounted Police. 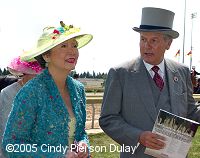 Woodbine chairman and CEO David Willmot escorts the Governor General down the red carpet to the royal box. 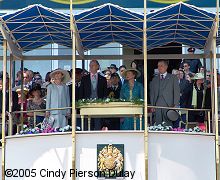 Watching the races from the royal box. 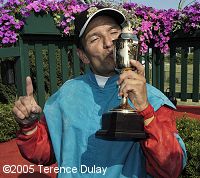 Jockey Pat Valenzuela kisses the Queen's Plate trophy after winning his first Plate in his first try. It is a tradition at Woodbine for the winning jockey to kiss the trophy after major stakes races. 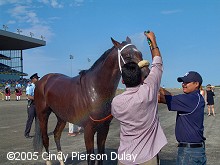 Queen's Plate winner Wild Deserts gets hosed down after the race. It was very hot that day with both people and horses suffering from the heat. Look close for the rainbow on his shoulder. 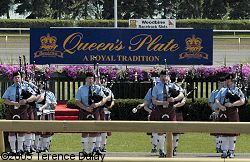 The bagpipers are another Queen's Plate tradition. 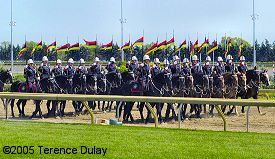 The Toronto mounted police parade for the crowd after the arrival of the royal representative. 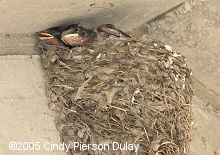 These baby swallows were not happy about the heat or the crowd on Queen's Plate day. Because of the heat and bright sun, people were congregating under the stairwells where this nest was located. The mother and father bird kept diving at people trying to make them leave to no avail.