Woodbine is well-known as the host track for the Queen's Plate, North America's oldest continuously-run stakes race, but it is also known for its 1 1/2-mile E.P. Taylor Turf Course, used for the Grade 1 Atto Mile, Canadian International, and E.P. Taylor Stakes held later in the year. The Queen's Plate undercard featured three stakes races all run over this famous course. 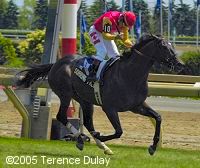 The Grade 3 Scotts Highlander Handicap featured older horses sprinting 6 furlongs. A field of nine went to post in this $225,400 event. Reigning Canadian Horse of the Year Soaring Free, who also won this event last year, was sent off as the overwhelming 2-5 favorite, with I Thee Wed the 6-1 second choice. Owner Michael Gill and trainer Mark Shuman shipped in 10-1 fourth choice Worldwind Romance, with Pat Valenzuela getting the mount.

When the gate opened, jockey Ray Sabourin sent 44-1 longest shot Draw Fire to the lead and he set the pace uncontested through a quarter in 22.08 and a half in 44.50, two lengths clear of the stalking Soaring Free at the top of the lane. At the 3/16 pole, jockey Todd Kabel asked the champion for run and got it, as Soaring Free swept to the lead with ease, and easily drew away to a 2 length victory in a time of 1:08.03 over the firm course. It was just 3/4 length back from Worldwind Romance to 41-1 shot All Star Lover in third. I Thee Wed failed to fire, finishing sixth. The $134,280 winner's share pushed Soaring Free above the $2 million mark in career earnings.
Results Chart from DRF. 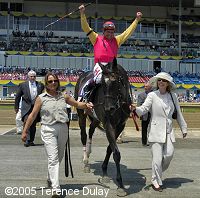 Soaring Free and jockey Todd Kabel are led to the winner's circle by owner Tammy Samuel-Balaz while trainer Mark Frostad follows behind. Winning rider Todd Kabel said, "It's a great feeling, just to be a part of Soaring Free, the Samuel team and everybody that's working with him. He's just a tremendous horse that runs hard every time he comes out. He's maturing with his age. He's not as speed crazy as he used to be. He's letting us settle him in a lot more. That's going to be a big change in this horse's career, I think, if we can get him to relax. He's a big, playful, happy horse. He loves to run."

Winning trainer Mark Frostad said, "He's just a great horse. He gives his best every time. We're getting beyond maturity now. We're getting into a little bit of old age. That's why we're not running him as much as we use to. We'll space his races three or four weeks apart at least. We've got to pick our spots now." 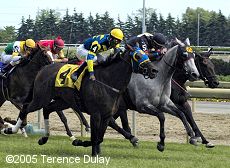 The $100,000 Singspiel Stakes featured eleven older horses traveling a complete 1 1/2 mile circuit of the course. 11-1 shot Daddy Cool stalked the pace in fifth down the backstretch, then surged to the lead at the eighth pole and held off the late run of 8-1 shot Shop Hill to win by a head in 2:27.66. 8-5 favorite Burst of Fire disappointed in sixth. Winning jockey Jim McAleney said, "The horse ran very well, we had an outside stalking trip. He dragged me all the way around and when I called on him, he responded really well. I saw Shop Hill coming and all I could do was hope we could hold on long enough." It was the first win in 2005 for trainer Sean Smullen, who said, "He's been training very well,"
Results Chart from DRF. 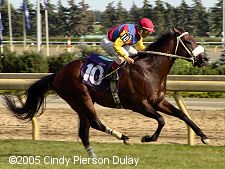 The $100,000 Charlie Barley Stakes saw ten 3-year-olds travel a one-turn mile on the turf. 9-1 shot Gamblers Slew grabbed the lead straight out of the gate and led every step of the way to win by 2 lengths over 10-1 shot Stag Nation, in a time of 1:33.64. 5-2 favorite Accountforthegold disappointed in seventh. Winning trainer Jody Hammett said, "You can't imagine how it feels. This is a lovely horse. He has tons of class. (Jockey) Rui (Pimentel) just got him out there and let him relax and he kicked on." Pimentel added, "I thought I had it at the 3/8 pole. I knew I had him nice and comfortable. I just let him relax,"
Results Chart from DRF.