The $1 million Queen's Plate Stakes is the longest continuously-run stakes race in North America, and celebrated its 150th anniversary running on Sunday at Woodbine. It is Canada's equivalent of the Kentucky Derby and is the first jewel in the Canadian Triple Crown. A field of 13 Canadian-foaled 3-year-olds went to post in this 1 1/4 mile event over the main Polytrack course on a warm sunny afternoon, with the temperature around 80 degrees.

Sam-Son Farm homebred Eye of the Leopard was sent off as the 2-1 favorite, exiting a neck victory in the Plate Trial last time out. In to challenge him included two fillies taking on males for the first time, 4-1 second choice Milwaukee Appeal, runaway winner of the Woodbine Oaks in her last start, and 9-2 third choice Tasty Temptation, who was a late-closing second to Milwaukee Appeal in the Oaks.

Jockey Jim McAleney sent 11-1 shot Reservoir to the front and he was quickly joined by 8-1 Mr. Foricos Two U and new jockey Mike Smith first time past the stands, as the pair set early fractions of 24.05 and 48.11 over the fast Polytrack surface. Down the backstretch, Mr. Foricos Two U took over the lead through 3/4 in 1:12.93 and led the field around the far turn, as Reservoir tired and faded from contention. Entering the stretch, Mr. Foricos Two U stubbornly held the lead through 1 mile in 1:37.41, but Eye of the Leopard and regular rider Eurico Rosa da Silva, who had stalked the pace in fourth most of the way around, moved alongside to challenge. The pair battled through the final 3/16 mile, with Milwaukee Appeal, sixth early, also gaining on the far outside. In the final strides, Eye of the Leopard pushed his neck in front for the hard-fought victory in a time of 2:03.84. It was just a head back to Milwaukee Appeal third, and a log 2 3/4 lengths to late-running Tasty Temptation fourth. 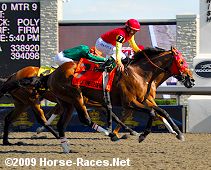 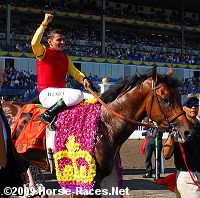 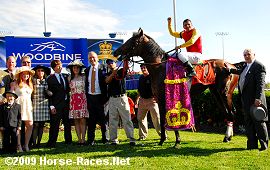 Left: Eye of the Leopard heads for the winner's circle. Winning trainer Mark Frostad said, "Well, it wasn't nearly as exciting as I had hoped. But we managed to win the race. It was very nice. The horse ran a super race. Mr. Foricos Two U ran a super race. (Jockey) Mike Smith was trying to steal it from us, but we got there. He's got a huge stride. He was inching his way up. I was hoping it would be a little bit more dramatic than that and get that over with. But obviously that didn't happen."

Right: Eye of the Leopard in the winner's circle. 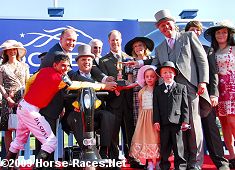 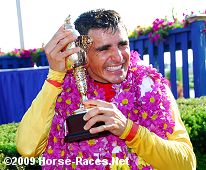 Left: Royal representative Lieutenant Governor of Ontario David Onley presents the trophy for the 2009 Queen's Plate. Rick Balaz, racing manager for Sam-Son Farm and husband of the late Tammy Samuel-Balaz said, "I think I rode the horse as much as Eurico did down the stretch, definitely. Once we saw him start to move forward, it was just a fantastic feeling. Once I knew we were going to win the thing, I think we all kind of fell apart." The Samuel family had 17 members in the winner's circle to accept the trophy from Lieutenant-Governor of Ontario David Onley.

Right: Jockey Eurico Rosa da Silva was ecstatic over winning his first Queen's Plate. Da Silva said, "I have the greatest team in the world behind this horse. Mark (Frostad) was so nice, he never pressured me. (Eye of the Leopard) was travelling very comfortably, he just kept going at that pace, he got the job done, that is the most important thing. I am the happiest man in the world." 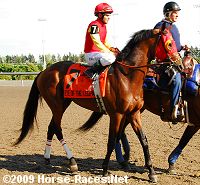 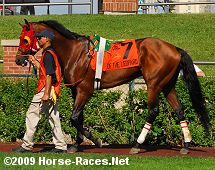 Left: Eye of the Leopard in the post parade.

Right: Eye of the Leopard in the paddock before the race. Owner Mark Samuel, brother of the late Tammy Samuel-Balaz and son of the late Liza Samuel, said, "We've had a lot of great moments at the track. I don't think I've ever had a more emotional day at the track than today. In many ways this is sort of a legacy from the past and a branch into the future. The breeding would have come from my sister Tammy and Mark (Frostad) thinking it through. The name was one of the last crop of names that my mother named before her passing. Even his nickname harkens back to one of the favorite horses that Dad (Ernie Samuel) loved, Imperial Choice. His nickname was Lumpy and this horse's nickname was Lumpy." 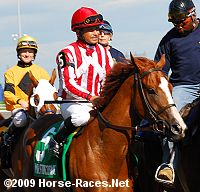 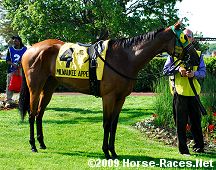 Left: Second place finisher Mr. Foricos Two U in the post parade. His trainer Catherine Day-Phillips said, "He ran fantastic. With the crowd, he was a little antsy warming up. Mike (Smith) said he was pretty sharp warming up. He said that when he was in the gate, he was ready to rumble. He thought it would be best to let him go to the front and see if he'd settle. He ran an awesome race. We are all thrilled." His jockey Mike Smith added, "He was very much on his toes. He really wanted to do something today. I figured he was going to be a little fresher than he normally is. When he got his head in front, he really relaxed. That was a big key. Before that, he was taking a pretty big pull. Finally, I had to let him out a little bit. It was a gallant effort. He didn't see (Eye of the Leopard) way out there. I was glad to be here and happy to come back."

Right: Third place finisher Milwaukee Appeal in the paddock before the race. Her jockey Stewart Elliott said, "She ran a great race. She gave everything she had out there. Around the turn, I thought we had a chance to win it, but they weren't coming back. They were running, too. She was still trying and she never gave up." 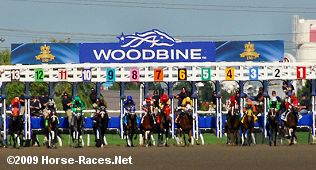 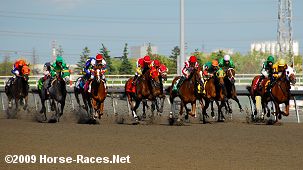 Left: The horses break from the gate for the 150th Queen's Plate at Woodbine.

Right: The entire field for the 150th Queen's Plate shortly after the start.