The 150th running of the $1 million Queen's Plate Stakes, scheduled for June 21 this year, kicks off the Canadian Triple Crown which is restricted to 3-year-olds foaled in Canada. The last major local prep for the classic is the $150,000 Plate Trial Stakes, run exactly 3 weeks before the big dance. Entrants carry the same weight, 126 pounds, that will be assigned for the Queen's Plate, but over a distance of 1 1/8 miles on Polytrack, 1 furlong shorter than the Plate.

A field of 10 hopefuls went to post on a chilly, sunny afternoon at Woodbine with temperatures in the 50's with a strong headwind through the stretch of around 30 miles per hour. Windways Farm homebred El Brujo was sent off as the 8-5 favorite, exiting wins in the Achievement and the Queenston, over 2-1 Southdale, a maiden winner last out and making his first start around 2 turns. Eye of the Leopard, making his stakes debut in his third lifetime start for owner-breeder Sam-Son Farm after breaking his maiden last time out, was the 5-1 third choice on the board.

When the gate opened, jockey Chantal Sutherland sent 16-1 Costalivin to the front, and he set slow early fractions of 24.77, 49.66, and 1:13.78 while being pressed by Southdale down the backstretch. Favorite El Brujo sat another length behind the pacesetters in third. Entering the homestretch, Southdale took over the lead from the tiring Costalivin through a mile in 1:38.84. Eye of the Leopard, who was sixth most of the way, came out five wide into the lane and closed with a rush down the center of the track to nail Southdale at the line by a neck in a time of 1:51.80 over the fast Polytrack surface. It was another 2 lengths back to late-running 30-1 Rapid Release, while favorite El Brujo tired badly through the stretch to finish ninth.

Eye of the Leopard is by A.P. Indy out of Eye of the Sphynx, a filly by Smart Strike who won the 2004 Woodbine Oaks. 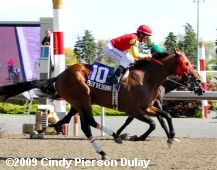 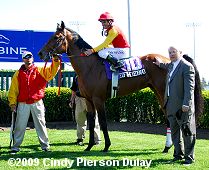 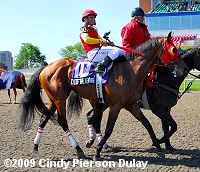 Left: Eye of the Leopard in the winner's circle with trainer Mark Frostad at his hip. Frostad said, "He's just a big, goofy kid right now. He'll get better as he goes along. He doesn't have a whole lot of seasoning but his last two races have been terrific. I was getting concerned (about the way the Plate Trial was unfolding). We went a little wide the first turn and we were very wide coming out of the second turn. You lose a lot of lengths doing that but you don't want to have to check a horse like this. He's such a big animal. He gets into stride and you don't want to do anything to discourage him. Fortunately, Eurico got him there in time. I hope he keeps getting better."

Right: Eye of the Leopard returns after the race. 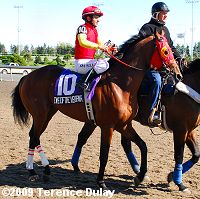 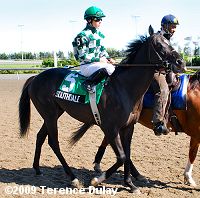 Left: Eye of the Leopard in the post parade. Winning jockey Eurico Rosa da Silva said, "I was very, very confident. He was relaxing in the race. Down the backstretch I had so much horse. I was just waiting for the right time to let him run and that's what I did. He was running very focused. In the middle of the turn, I had no choice, we had to go outside but he made a very good move, continued to run strong and galloped out beautifully."

Right: Second place finisher Southdale in the post parade. His jockey Emma-Jayne Wilson said, "It was a great trip. He's only had a few races under his belt. He's still learning. He's still got a few more things to figure out. It was his first time going 2 turns and it was an extended 2-turn distance. I'm really happy with the way my horse responded and I think it set him up good for the Plate. He's doing everything right just based on ability. From his last race to this race, the gallop boy has been getting him to switch his leads and getting him to relax. Ideally, if he would do everything I asked him to do, it would be perfect, but he's not always that cooperative. He was a little sharp today." 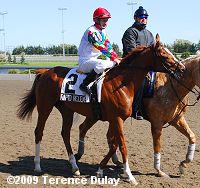 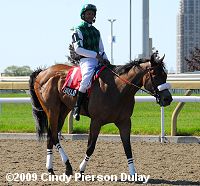 Left: Third place finisher Rapid Release in the post parade. His jockey Jono Jones said, "He tried his heart out. We had a really nice trip and he was digging in down the lane. He was training really well coming into the race and he showed up today. We've got the right man (Roger Attfield) training him, so let's hope we can get another one together." Jones and Attfield teamed up to win last year's Plate with Not Bourbon.

Right: 9th place finisher and beaten favorite El Brujo looks exhausted as he returns after the race. The 8-5 favorite was under strong restraint by regular rider Patrick Husbands early but he pulled to contention down the backstretch, moved up to third on the far turn but faded through the stretch to finish ninth beaten 7 3/4 lengths. The Malcolm Pierce trainee has a career record of 4 wins, 3 seconds, and 1 third in 9 starts, earning $389,610 for owner-breeder Windways Farm.


Immediately before the Plate Trial, a field of twelve 3-year-olds competed in a $78,700 maiden special weight event at the same distance of 1 1/8 miles. 7-2 second choice Gallant rallied from well off the pace to get the win by a nose over 27-1 Stardust Ziggy in 1:52.50. It was another 1 1/2 lengths back to 12-1 Big Brown Brewski third, while 3-1 favorite Yorkville stalked the pace in fourth but faded late to finish 8th beaten 9 1/2 lengths. Of the top three, who were all Canadian-breds, only Stardust Ziggy has been nominated to the Queen's Plate.
Full results chart from DRF