The top three-year-old Canadian bred fillies took to the track in Sunday's Labatt Woodbine Oaks, over 1 1/8 miles on the main track for a $500,000 purse. The first leg of the Canadian Triple Tiara drew a compact field of just five horses, with Sam-Son Farm entrant Eye of the Sphynx sent off as the 4-5 favorite. Trainer Reade Baker sent out a trio of horses to try to upset the San-Son powerhouse, led by 5-2 second choice Hong Kong Dancer.

When the gate opened, Eye of the Sphynx was quickest away and held the lead around the first turn through a quarter in 23.72, after which jockey Todd Kabel got her to relax as 7-2 third choice Silver Bird surged ahead to inherit the lead, taking the tightly packed field through a half in 48.21 and three quarters in 1:13.72. The favorite continued to stalk the pace within a length. Turning for home, Silver Bird yielded to her quick pace, and once again Eye of the Sphynx was on the lead. Rallying from last place at this point was 29-1 longshot Touchnow, splitting rivals at the top of the stretch. Eye of the Sphynx drew three lengths clear after a mile in 1:39.97, and won by 4 1/4 lengths in 1:53.11 over Touchnow. It was a whopping nine lengths back to 7-1 shot and last year's champion juvenile filly My Vintage Port in third, then 1 1/4 back from her to Hong Kong Dancer. Silver Bird faded all the way to last, 16 lengths back of Hong Kong Dancer. Eye of the Sphynx picked up $300,000 to boost her bankroll to $588,340. She began her career with a maiden win at Keeneland in April, then had taken both the Fury (May 9) and Selene (May 23) at Woodbine, prior to today's performance. Her previous wins had all come on off-tracks, but today the track was fast. 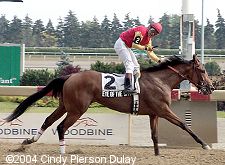 Eye of the Sphynx crosses the line 6 lengths in front. Winning jockey Todd Kabel said, "She showed up today. That's four times in a row. She's done everything we've asked her. I thought that if we could slow it up and sprint home, that would do it. That's exactly what happened. She was grappling with me for about an eighth-of-a-mile and then she just dropped the bridle. I was very happy when that happened. She relaxed well for me, I was able to position her great and just had a super trip." 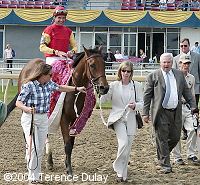 Owner Tammy Samuel-Balaz leads Eye of the Sphynx to the winner's circle with trainer Mark Frostad along side. Frostad said, "She's been really a great surprise for us this year. You come into the year with a filly that's never started and she ends up doing this kind of thing, it's pretty special. The Plate is definitely a possibility. We did it with Dancethruthedawn (2001 Oaks and Plate champion), but she had the benefit of a two-year-old campaign. This filly has done an awful lot in a short period of time. We're going to have to really watch her and see how she comes out of this race. We'll think about it." 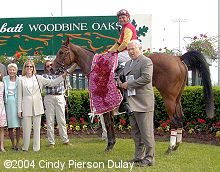 Eye of the Sphynx in the winner's circle. When asked about a possible Queen's Plate ride aboard Eye of the Sphynx, jockey Todd Kabel said, "She's a very classy filly on her own. That's going to be left up to (Eye of the Sphynx's connections). She has a lot of ability and I think it's yet to be seen. She's just learning. She's been asked to run four hard races. She's just all class." 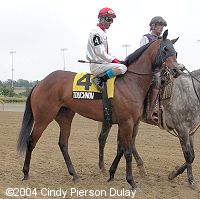 Touchnow, the longest shot on the board, was a surprise second place finisher. Her jockey Patrick Husbands said, "I worked this filly a week ago and she worked fantastic. I was just hoping that she would be able to run to that work and she really ran well. I had to come from off the pace, but she really tried hard." 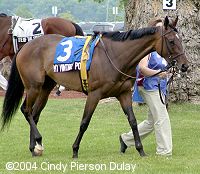 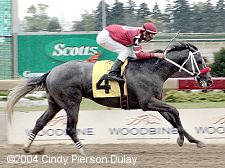 On the undercard were two more stakes for three-year-olds. The $140,375 Victoria Park Stakes featured the males and included four Queen's Plate eligibles who were taking on open company. 9-2 favorite Organ Grinder stalked the early pace of 7-1 shot Burst of Fire through three quarters in 1:13.53, then split horses on the turn and took off down the lane, winning by six lengths over 5-1 third choice Copper Trail in a time of 1:51.55 for the 1 1/8 miles on the main track. It was 2 3/4 lengths back to 19-1 shot Tobe Suave in third. Two claims of foul were lodged against Organ Grinder, by the second and third place jockeys, but both were disallowed and the result stood. 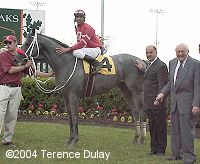 Winning jockey Simon Husbands said, "I had a good trip this afternoon. It was tough to get him to relax. He was a little bit rank all the way through the race. At the half when horses started to stop in front of me he started to get ranker. But when I got a little room on the outside (going into the far turn) and let him go outside, he just exploded." Winning trainer Sid Attard said, "He's been training really good. He's always showed he's going to be a nice horse. He likes to go long. The farther he goes, the better for him." 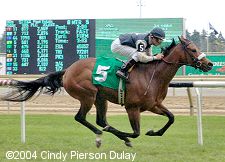 Three-year-old fillies not eligible for the Oaks or who have a preference for shorter distances competed in the $112,000 Alywow Stakes, a 6 1/2 furlong sprint on the turf course. 7-1 shot Sweet Problem stalked the pace on the rail early in fourth, found a seam turning for home, and drove clear to win by 3 1/2 lengths over 16-1 longshot Emerald Earrings in a time of 1:14.97 over the firm course, just 0.37 seconds off the course record set in 2000. It was just a head back to third place finisher Royal Liverpool, while 3-1 favorite Volatile Vickie held the lead through a half but tired badly through the lane, finishing last of eleven. Winning rider Jim McAleney said, "It was really easy today, she was really well prepared. The hole opened up at the head of the stretch and she was so explosive. She likes what she does, she can handle dirt, turf, whatever you throw at her."