The $300,000 Nassau Stakes (G2) is the first stakes race of the year at Woodbine for older fillies and mares on the turf. A field of nine went to post on Saturday afternoon in this 1 1/16 mile trip around one turn of the E.P. Taylor Turf Course, on a breezy, cloudy afternoon with temperatures in the 60's, after overnight rains rendered the course good. As expected, Rutherienne was sent off as the 4-5 favorite exiting a second place finish to Forever Together in the Jenny Wiley at Keeneland in April. In to challenge the Christophe Clement trainee included 4-1 second choice Callwood Dancer, last year's Sovereign Award winner as Canadian champion turf female, who was eased last out in The Very One Stakes at Gulfstream in February. Points of Grace, an allowance winner on the Polytrack last out and making her stakes debut at odds of 6-1, completed the top three on the board.

16-1 Remarkable Remy battled for the lead with 24-1 Meadow Saffron down the long backstretch run through fractions of 24.75, 48.59, and 1:12.21 over the good course, with Rutherienne sitting in third just behind them down on the rail and Points of Grace to her outside in fourth. Entering the stretch, Remarkable Remy tired as Rutherienne found an opening between her and Meadow Saffron to take over the lead at the 1/8 pole. Under steady urging by regular rider Alan Garcia, Rutherienne pulled away through the final furlong to win going away by 3 lengths over late-running Callwood Dancer in 1:41.89. It was just 3/4 length back to Meadow Saffron third. 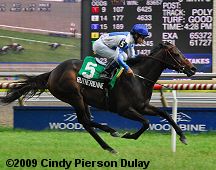 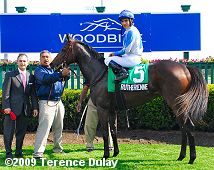 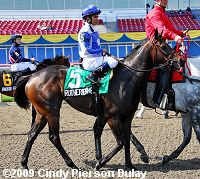 Left: Rutherienne in the winner's circle. Christophe Lorieul, assistant to winning trainer Christophe Clement said, "She was, not to say, unlucky, but she ran against some very tough competition last year. She proved that she was the best today. We were not sure (of the condition of the turf). We were watching the Weather Channel very closely. She ran well the other time at Keeneland and the turf was listed as good. I was a bit concerned today because I think she's a better filly on good to firm turf. I was just hoping it was not too soft. We'll try (to come back to Woodbine this year). She proved that she liked the turf here. Maybe California or Saratoga next."

Right: Rutherienne returns after the race. The win, her 10th in 19 career starts, earned her $180,000 pushing her career earnings over $1.1 million. 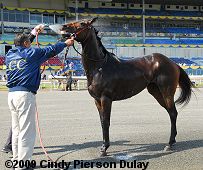 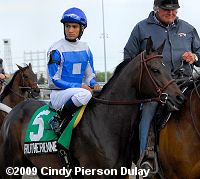 Left: Rutherienne gets hosed off before heading to the barns.

Right: Rutherienne in the post parade. Her jockey Alan Garcia said, "On paper, there wasn't too much speed in the race. My filly was comfortable where she was. I wanted to be patient until the top of the stretch. It's a long stretch and the last quarter, I was looking for room. Then it opened up a little bit and I had a small opening. I wanted to take advantage. She went in there and she kept on going." 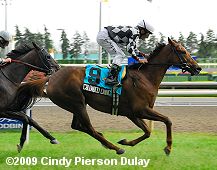 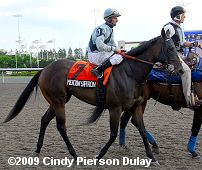 Left: Second place finisher Callwood Dancer crosses the finish line. The 4-1 second choice raced in fifth early between horses under regular rider Eurico Rosa da Silva, was boxed in through the stretch until she got out inside the 1/8 pole and rallied well to get second beaten 3 lengths. The Roger Attfield trainee improved her record to 6 wins, 5 seconds, and 5 thirds in 3 starts, earning $774,513 for owners Three Chimneys Racing LLC and Harlequin Ranches.

Right: Third place finisher Meadow Saffron in the post parade. The 24-1 shot forced the pace under jockey Robert Landry, gained a short lead at the 3/16 pole but failed to hold off the top two finishers. She improved her record to 2 wins, 0 seconds, and 2 thirds in 8 starts, earning $85,008 for owner-trainer Frederick J. Seitz.