Queen's Plate Day is one of the biggest racedays of the year at Woodbine, and with nice weather, royal traditions, Father's Day, and the 150th anniversary running, the track saw one of its largest crowds in recent memory, with all reserved seats sold out and general admission seating plus the apron packed with fans. Those who came out were also treated to two other stakes races on the undercard, both run over the E.P. Taylor Turf Course which is outside of the main Polytrack oval. Rain on Saturday downgraded the turf to good for the start of the card, but the hot sun dried the course to firm in time for the second stakes race. 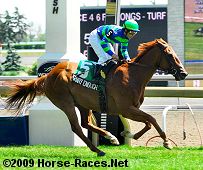 The first stakes race on the card was the $200,000 Highlander Stakes (G3), a 6 furlong sprint on the turf for older horses. Last year's winner Heros Reward was sent off as the 2-1 favorite in the field of 10, exiting a disappointing fifth place finish in the Jim McKay Turf Sprint at Pimlico. In to challenge him included 7-2 second choice Mr. Nightlinger, who defeated Heros Reward in that same race last time out, and 7-1 third choice Smart Enough, exiting a victory in the Wolf Hill Stakes at Monmouth Park in his last start.

When the gate opened, Smart Enough and Mr. Nightlinger hooked up on the front end and dueled for the first 1/4 mile before Smart Enough sprinted clear when asked by jockey Jeremy Rose. Smart Enough set fractions of 22.32 and 44.73 while as many as 2 lengths in front. Entering the stretch, Smart Enough opened up a 3 1/2 length lead on the tiring 9-1 True To Tradition. 12-1 Field Commission, ninth early, came out four wide and put in a strong rally through the long stretch but was left with too much ground to make up, as Smart Enough cruised under the line 2 lengths clear in a time of 1:08.26 over the good turf course. It was just a neck back to late-running favorite Heros Reward third.
Results Chart 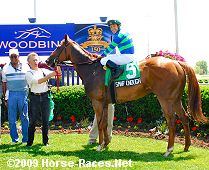 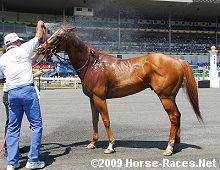 Smart Enough in the winner's circle and getting sprayed off before returning to the barns. Winning trainer John Fisher said, "We love to come to Woodbine. It's the best track in North America. He got hurt in the Shakertown Stakes at Keeneland last year. It's taken us this long to get him back. I knew he was back after his race at Monmouth." Smart Enough, who also won this race in 2007. is the first repeat winner of the Highlander since Soaring Free in 2005.

Winning jockey Jeremy Rose added, "It's a really nice course. Everything here is done first class. 'Doc' Fisher did a great job getting him ready. I just held on for a while. A horse that relaxes the first part usually has something to finish with. He relaxed really well off the bit." 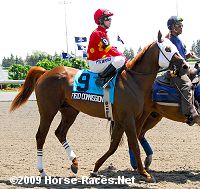 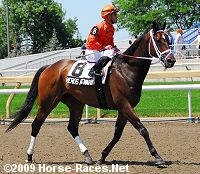 Left: Second place finisher Field Commission in the post parade. The 11-1 shot, in his first career start on turf, sat well off the pace under regular rider Tyler Pizarro, came out 4 wide for the drive and rallied well between horses to get up for second. The Dan Vella trainee improved his record to 5 wins, 3 seconds, and 4 thirds in 14 starts, earning $405,918 for owners E. Seltzer and D. Vella.

Right: Third place finisher and beaten favorite Heros Reward returns after the race. The 2-1 favorite rated off the pace in 4th under regular rider Javier Castellano, came out into the stretch and rallied to finish third beaten a neck for second but 2 lengths back of the winner. The Dale Capuano trainee improved his record to 11 wins, 7 seconds, and 3 thirds, earning $992,975 for owners Rob Ry Farm and Jayne Marie Slysz. 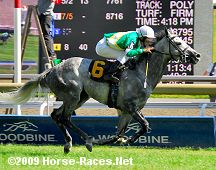 The second stakes race on the afternoon was the $150,000 Singspiel Stakes (G3) at 1 1/2 miles, one complete lap of the E.P. Taylor Turf Course. Just 5 went to post after 1 scratch, with 7-5 favorite and last year's winner Mission Approved shipping in from Belmont where he was second in the Kingston Stakes for New York-breds last time out. In to challenge him included 2-1 second choice Musketier, ninth in the Dixie Stakes at Pimlico in his last start, and 5-2 third choice Sligovitz, unraced since finishing third in the Pan American at Gulfstream in March.

Jockey Javier Castellano sent Mission Approved to the early lead but he was soon joined to his outside by Musketier, as the pair set slow early fractions of 25.27, 49.65, and 1:13.84 over the firm course. With a half mile remaining, Musketier edged up alongside the pacesetter to take a short lead through 1 mile in 1:37.85 and quickly opened up. Entering the stretch, Musketier had extended his advantage over Mission Approved to 3 lengths through 1 1/4 miles in 2:02.41, and easily cruised to victory through the 2 1/2 furlong stretch to win by 4 lengths in 2:27.41. It was just 3/4 lengths from Mission Approved to third place finisher and 11-1 longest shot Cobotown Ron third.
Results Chart 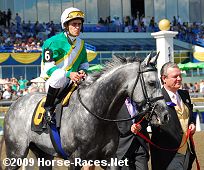 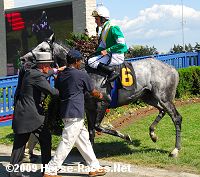 Musketier heads to the winner's circle, but refused to enter until they eventually backed him into it. Winning trainer Roger Attfield said, "He's been sitting on a winning race for a little while. I think I made a mistake sending him to Pimlico and shortening him up (to 1 1/8 miles). He didn't handle the track. He's trained really, really well coming into this race."

Winning jockey Jono Jones added, "I was going to stay close to (Mission Approved) and see what he had in the end. Obviously, he didn't have what we had. (Musketier) felt great. We knew we had a big shot." 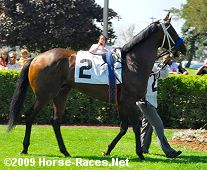 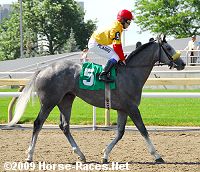 Left: Second place finisher and beaten favorite Mission Approved in the paddock before the race. The 7-5 favorite battled for the lead under new jockey Javier Castellano for 9 furlongs but had no answer when the eventual winner pulled away, and was all-out in the final furlong to hold second by 3/4 length. The Gary Contessa trainee improved his record to 6 wins, 3 seconds, and 1 third in 16 starts, earning $367,227 for owner-breeder Dr. William F. Coyro Jr.

Right: Third place finisher Cobotown Ron returns after the race. The 11-1 longest shot settled well off the pace for the first mile under regular rider Tyler Pizarro and closed three-wide through the stretch to no avail, finishing third beaten 4 3/4 lengths. The Analisa Delmas trainee improved his record to 5 wins, 2 seconds, and 7 thirds in 32 starts, earning $243,686 for owner-breeder Fieldstone Farms Inc.