Sunday marked the 60th anniversary of racing at Woodbine Racetrack in Toronto, highlighted by the $500,000 Woodbine Oaks Presented by Budweiser, the most important race for 3-year-old fillies foaled in Canada. A field of 10 went 1 1/8 miles over the Tapeta. Conditions were excellent with mostly sunny skies and temperatures in the high 60's. Selene (G3) winner Gamble's Ghost was sent off as the 4-5 favorite over 9-2 second choice Caren, second in both the Selene and Lady Angela, and 6-1 third choice Conquest Partygirl, a maiden winner at third asking last out.

Conquest Partygirl was quickest away through an opening quarter of 23.75 before Caren took over on the backstretch through fractions of 47.91 and 1:12.51. Turning for home Caren opened up on the field by 3 lengths at the 1/8 pole through 1 mile in 1:39.23. However, 15-1 Neshama, who had stalked the pace in third throughout, gained the lead at the 1/16 pole and was all out to hold off late-running favorite Gamble's Ghost to win by a nose in 1:52.34. It was another 2 lengths back to Caren third. 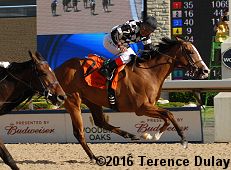 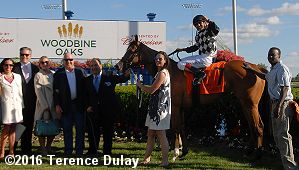 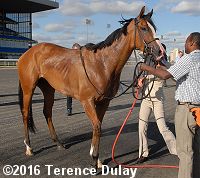 Left: Neshama in the winner's circle. Winning owner-trainer Catherine Day-Phillips said, “She’s been a nice filly and acted like a racehorse really from the beginning. In the fall, she really came into her own and this spring she’s been very professional. She really enjoys her job. I think we’ll enjoy this and we’ll discuss (Queen's Plate) Monday and Tuesday.”

Right: Neshama gets hosed off after the race. 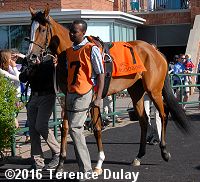 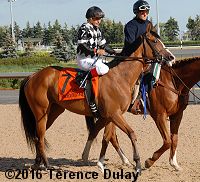 Left: Neshama in the paddock before the race. Winning jockey Eurico Rosa da Silva, celebrating his first Oaks win, said, “I had a very easy trip. Everything went well for me. When Jesse Campbell asked Caren to open up a little bit, I just wanted to keep going to maybe finish second. When I saw Caren stopping, it was my great chance to win the race, and she ran great. She dug in. She’s a nice filly. The distance is no problem for her. She’s so relaxed. I’m thrilled.” 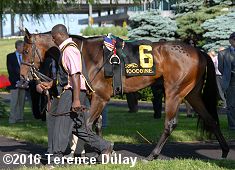 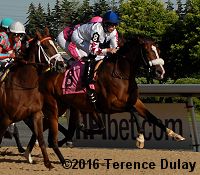 Left: Second place finisher and beaten favorite Gamble's Ghost in the paddock before the race. Jockey Luis Contreras said, “I was on the rail where I didn't want to be, but I had to stay there. When I tried to tip out to make my move, I could see the opening but everyone was trying to move at the same time and horses were tiring in front of me. When I made my move, if nothing happened, we would have won.” 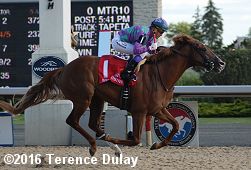 Immediately before the Oaks, a field of 6 Canadian-foaled three-year-old males also went 1 1/8 miles in the $150,000 Plate Trial Stakes, the major local prep for the Queen's Plate to be run in 3 week's time. Last year's Coronation Futurity winner Shakhimat was the 9-10 favorite, 9th in the Kentucky Derby (G2) last out, over 5-2 second choice Amis Gizmo, 5th in the Wando , and 9-2 third choice Battery, 10th in the Louisiana Derby (G2).

Jockey Gary Boulanger sent 37-1 longest shot Conquest Cavalry to the lead first time by and he set fractions of 23.98, 48.16, and 1:13.06 while asm any as 2 lengths ahead of Shakhimat. Entering the lane, Conquest Cavalry tired as Amis Gizmo, 4th early, moved out 3 wide to gain the lead through 1 mile in 1:38.87. Kept to task by Luis Contreras, Amis Gizmo drew off to win by 2 lengths over Shakhimat in 1:52.12. It was another 1 3/4 lengths back to 14-1 Sir Dudley Digges third.
Full results chart from DRF 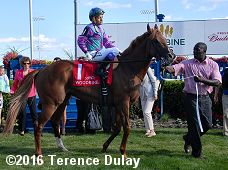 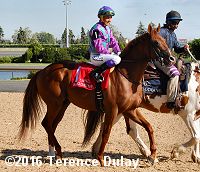 Left: Amis Gizmo in the winner's circle. Winning owner-breeder Ivan Dalos said, “We found he had a little bit of a problem (after the Wando Stakes) and there was an excuse for him to run as bad as he did. So now that we’ve got it figured out, we’re back in business. I was surprised (at how easily he won) because Shakhimat is a really nice horse, so to beat him the way we did means something.”

Right: Amis Gizmo in the post parade. Jockey Luis Contreras said, “Yeah it’s really new (to come from off the pace). This horse was perfect. He was so nice and calm and relaxed. I could do anything with him today. After the break, I took a little bit of a hold with my horse and I saw Shakhimat was in front. I just wanted to stay close and be right there any time we wanted to make a move.” 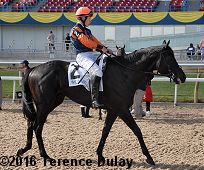 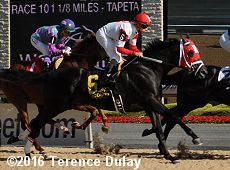 Left: Second place finisher and beaten favorite Shakhimat returns after the race. Jockey Emma-Jayne Wilson said, "We had a real nice go. He switched off real nice and moved along well down the backside. We moved into good position around the turn and I could feel the pressure coming down on him around the turn. He fought hard but he just got beat by a better horse today," 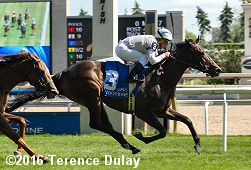 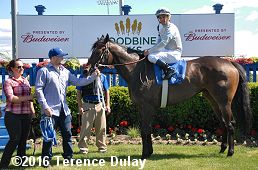 Kicking off the stakes action on Sunday was the $100,000 Alywow Stakes for 3-year-old fillies sprinting 6 1/2 furlongs on the firm (GoingStick 11.2) E.P. Taylor Turf Course. Miss Katie Mae was sent off as the 5-4 favorite in the field of 8 off her fifth place finish in the Hilltop Stakes. In to challenge her included 4-1 second choice Princess Princess, an allowance winner at Churchill last out, and 5-1 third choice Conquest City Girl, off her maiden win at 6th asking.

Winning jockey Javier Castellano said, "The way I handicapped the race, there was a lot of speed in the race. I’m surprised she broke on top with the other horses. I was supposed to come from way back and come down and end up on the lead. I tried to cover up as best I could and keep track of the horses. Turning for home, I angled out a little bit and was able to put her outside and find the last kick.”