The $1 million Arlington Million Stakes (G1) celebrated its 32nd renewal on Saturday afternoon at Arlington Park near Chicago, before 34,222 fans in attendance. Conditions were excellent with partly cloudy skies and temperatures in the low 80's, with the turf course rated firm. A field of 7 older horses went to post in this 1 1/4 mile turf feature looking for automatic entry in the Breeders' Cup Turf (G1) under the "Win and You're In" promotion. Last year's Breeders' Cup Turf (G1) winner Magician was sent off as the 9-5 favorite off his 6th place fnish in the King George and Queen Elizabeth Stakes (G1) after finishing second in the Prince of Wales's (G1) at Royal Ascot. In to challenge him included 5-2 second choice and defending champion Real Solution, winner of the Manhattan (G1) last out, and 9-2 third choice Smoking Sun, off his second place finish in the Singapore Airlines International Cup (G1) at Kranji.

Jockey Jamie Spencer sent 9-1 Side Glance to the lead first time by and he set easy fractions of 25.00, 49.45, 1:13.67, and 1:37.72 over the firm course while as many as 1 1/2 lengths in front of Magician in second, with Real Solution and 11-1 outsider Hardest Core contesting third. Entering the lane, Real Solution tired as Magician gained a short lead in mid-stretch. However, Hardest Core switched to the outside and powered to the front at the 1/16 pole to win by 1 length in 2:01.51. It was another 1 1/4 lengths back to pacesetter Side Glance third. 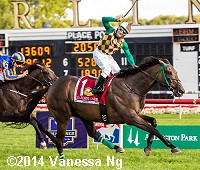 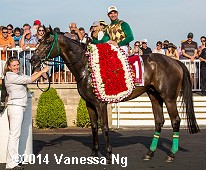 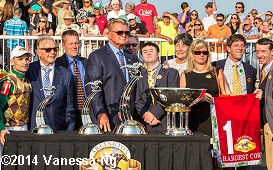 Right: The trophy presentation for the Arlington Million. Trainer Edward Graham said, "Words can't explain what a great feeling this is. He's gone through a lot. We had to cut 18 inches of intestines at one point and didn't know if he'd make it. I looked at the Sword Dancer, looked at the Leger, all three races were tough, but thought a shorter field would be better and the horse was training so well. He didn't know what he was going against but he showed it today." 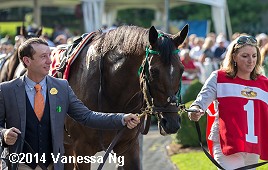 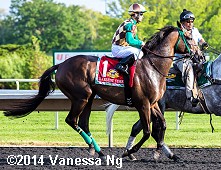 Left: Hardest Core in the paddock before the race. Winning jockey Eriluis Vaz said, "He's good horse, he's a nice horse, and I knew he was going to make his run. I have to thank the owner and trainer, they have been so supportive, and it's amazing." 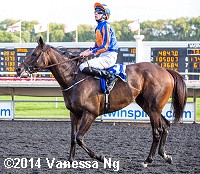 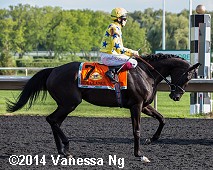 Left: Second place finisher and beaten favorite Magician. Jockey Joseph O'Brien said, "I had a nice position on the rail. I had a good trip, no excuses. He might have been better at 12 furlongs, but he ran a good race."

Right: Third place finisher Side Glance in the post parade. Jockey Jamie Spencer said, "He's an older horse but he's showing all the enthusiasm of a young horse. He tried very hard in the straight. He likes to get out striding, he likes to take the race to the other horses. We thought Magician would be hard to beat, but someone came and beat both of us."

The first International race of the card was the $400,000 American St. Leger Stakes for older horses going 1 11/16 miles around three turns of the turf. Ballyroan Stakes (G3) winner Eye of the Storm was sent off as the 3-1 favorite in the field of 10. In to challenge him included 4-1 second choice Suntracer, third in the Stars and Stripes (G3) last out, and 5-1 third choice Big Kick, winner of the San Juan Capistrano (G2) at Santa Anita. 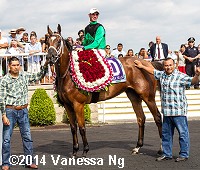 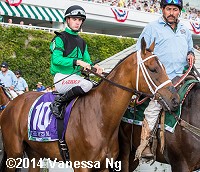 Left: The Pizza Man in the winner's circle. Winning jockey Florent Geroux said, "I was sitting in a stalking position, I wasn't worried, I saw his past races and was waiting for him to tell me when to go."

Right: The Pizza Man heads out to the track before the race. 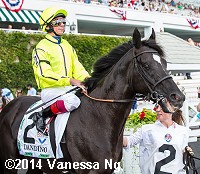 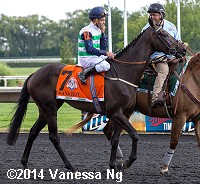 Left: Second place finisher Dandino heads out to the track before the race. Jockey Frankie Dettori said, "I had the perfect race. Turning in I thought we would win, but The Pizza Man never stopped. He ran really hard to the line. He's coming back to form, now."

Right: Third place finisher Havana Beat in the post parade. Jockey Joel Rosario said, "It looked like they were going pretty good up front, and I thought they'd slow down and come back to us a little more, so I made my move, but the top two were best today, I say. My horse ran good, though. He responded when I asked and he kept going, but the horses in front kept going too."

On to the Beverly D. won by Euro Charline
On to the Secretariat Stakes won by Adelaide