Queen's Plate Day is one of the biggest racedays of the year at Woodbine, attracting the biggest crowd of the year. Those who filled the grandstand and the apron on a picture-perfect Sunday afternoon were treated to four additional stakes races on the undercard. It was partly cloudy with temperatures in the high 70's, but the lack of wind and high humidity made it feel much warmer. 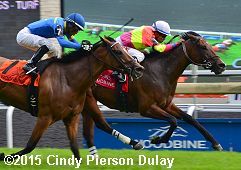 Immediately before the Plate, a field of 7 older horses contested the $200,000 Highlander Stakes (G2) at 6 furlongs on the turf. Last year's winner Something Extra was sent off as the even-money favorite off his 6th place finish in the Jaipur (G3) at Belmont after third in the Turf Sprint (G3) at Churchill. In to challenge him included 3-1 Katie's Eyes, winner of the Unbridled Sidney, and 5-1 Mosler, 6th in the Jaipur.

Something Extra and 17-1 longshot Go Blue Or Go Home dueled for the lead down the backstretch and around the turn through fractions of 22.45 and 44.70 over the firm course, while stalked by 10-1 Sharp Sensation. Entering the stretch, Go Blue Or Go Home gained a short lead, and was all out to hold off late-running Katie's Eyes by a neck in a new course record time of 1:07.18, lowering the old record by 0.21 seconds. It was 1 1/4 lengths back to Mosler third, and a neck more to the tiring favorite Something Extra fourth.
Results Chart 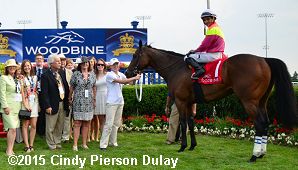 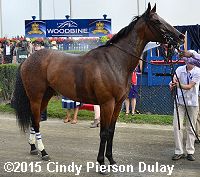 Left: Go Blue Or Go Home in the winner's circle. Winning trainer Reade Baker said, "He ran great. He ran fast and hard. It’s amazing how this turf course can get fast after all the rain we had. It’s absolutely amazing to get that quick that fast. But he is a gutsy horse.”

Right: Go Blue Or Go Home gets hosed off after the race. Jockey Alan Garcia said, "He broke good and was in a nice spot. Reade told me the week before, 'I have a winner for you.’ And he was right. I can’t say anything wrong.” 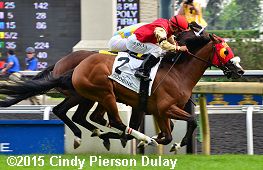 Immediately after the arrival of Ontario Lieutenant-Governor Elizabeth Dowdeswell, this year's Royal Representative, a field of 8 older horses contested the $150,000 Singspiel Stakes (G3) at 1 1/2 miles on the turf. Hyper was sent off as the 3-2 choice, 8th in the Manhattan (G1) after finishing 3rd in the Man O'War (G1) both at Belmont. In to challenge him included 5-2 second chouice Dynamic Sky, off a third place finish in the Belmont Gold Cup, and 5-1 third choice Aldous Snow, winless since last year's Singspiel and third in an allowance last out. 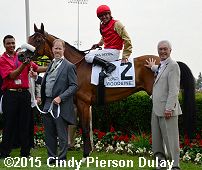 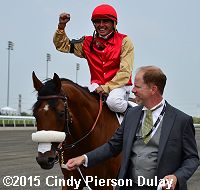 Left: Aldous Snow in the winner's circle. Winning trainer Malcolm Pierce said, "I think he came into this race better than he's come into any race in his life. We had confidence. And I'm glad no rain came and he got the turf he liked, firm turf."

Right: Aldous Snow parades after the race. Jockey Eurico Rosa da Silva said, "He was very game. He's a very easy horse to relax. He goes anywhere you want. He's a beautiful horse, he was in great shape. When I asked him he really responded, he fought very hard in the stretch. I had a lot of horse." 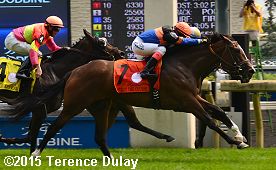 11-1 Smartyfly battled for the lead with 19-1 Solid Appeal through fractions of 25.11 and 49.45 while stalked by 21-1 Llanarmon. Solid Appeal gained the front on the far turn and held it to the 1/8 pole but Strut the Course, 4th early, rallied wide to win by a head over late-running Watsdachances in 1:45.41. It was 1/2 a length back to Solid Appeal third.
Results Chart 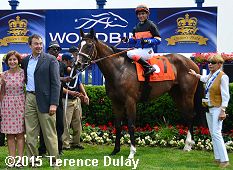 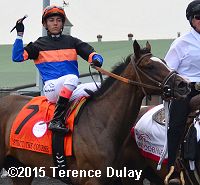 Left: Strut the Course in the winner's circle. Winning trainer Barb Minshall said, "She acted like she usually acts. She's a high-strung filly and we know her. We kind of expected she'd get on her toes. That's why I (saddled her indoors instead of in the walking ring). This was a big step up, going to open company with these fillies on the turf. It's a big difference from Ontario (restricted) races."

Right: Strut the Course returns after the race. Winning jockey Luis Contreras said, "I got a perfect trip. She broke very sharp and today my filly was trying to lay in down the stretch but we got it done in the end." 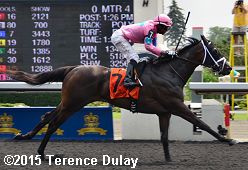 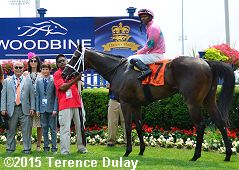 Winning jockey Patrick Husbands said, "He broke sharp. I didn't want to get hooked in a speed duel. I looked to the right, nobody was there. I take a hold of him, he was going good, then 2 1/2 furlongs out, he's going nowhere. I said, 'Oh my God'. Just on the turn, somebody come on the inside and bumped him in behind and I was on a different horse." Trainer Mark Casse, celebrating his 4th Clarendon win, added, "He is talented. We gelded him early and it's made a huge difference. We thought he was a decent horse, but he's surprised us. I was a little nervous at the top of the lane today but he showed his true grit."