On Sunday afternoon, a field of 16 Canadian-foaled 3-year-olds (just 1 less than the safety limit of 17) raced 1 1/4 miles over the Tapeta surface at Woodbine in the 159th running of the $1 million Queen's Plate Stakes, the oldest continuously-run stakes race in North America and the first leg of the Canadian Triple Crown. Those who filled the grandstand, apron, and backyard "Hats and Horseshoes Party" on a sweltering Saturday afternoon endured temperatures in the mid 90's, feeling closer to 114 with the humidity. A 20 MPH breeze and intermittent clouds provided little relief.

As expected, Wonder Gadot was sent off as the 2-1 favorite, winless since the Demoiselle (G2) and coming off 2nd place finishes in the Fantasy (G3), Kentucky Oaks (G1), and Woodbine Oaks. In to challenge her included 7-2 second choice Telekinesis, winner of the Plate Trial after finishing 2nd in the Lexington (G2), and 5-1 third choice Dixie Moon, winner of the Woodbine Oaks after finishing 2nd in the Selene (G3). Cup and Saucer Stakes and Tale of the Cat Stakes runner-up Strike Me Down was the 6-1 fourth choice with the rest of the field at double digits or longer.

Jockey Patrick Husbands sent Telekinesis to the front first time by and he set fractions of 23.12 and 46.82 while pressed by 46-1 Cooler Mike and stalked by 14-1 Neepawa and 24-1 Rose's Vision. At the 1/2 mile pole Rose's Vision gained a short lead through 3/4 in 1:11.85 before tiring badly, allowing Telekinesis to regain the front into the lane through 1 mile in 1:36.28. However, Wonder Gadot, 5th early under John Velazquez, came out 3 wide for room to pass the tiring Telekinesis at the 3/16 pole to open up by 3 lengths midstretch. 28-1 Aheadbyacentury, 13th early, put in a strong late rally that proved futile, as Wonder Gadot cruised to a 4 3/4 length win in 2:02.26. It was another 2 3/4 length back to 46-1 Cooler Mike third. Dixie Moon was never in contention, racing in 14th early and was eased at the finish.

Check out the four other stakes on the card, all on the turf: the Highlander Stakes (G1) won by Long on Value, the Dance Smartly Stakes (G2) won by Santa Monica, the King Edward Stakes (G2) won by Delta Prince, and the Charlie Barley Stakes won by Ride a Comet. 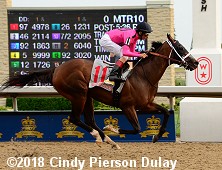 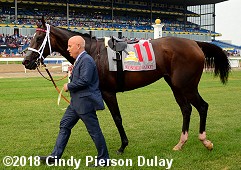 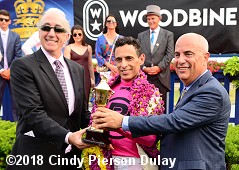 Left: Wonder Gadot being walked by trainer Mark Casse after the race. She was overheated due to the oppresively hot weather and did not go to the winner's circle after being hosed down several times. Casse said, "Her Kentucky Oaks, it was disappointing to lose. She's just been so unlucky, but she is so tough. She reminds me a lot of Lexie Lou, even though she weighs 200 pounds more than Lexie did. Lexie just thrived on running. There's horses that will just run and run and run, and luckily this is one of them."

Right: Posing the flower blanket and trophy are owner Gary Barber, jockey John Velazquez, and trainer Mark Casse. Winning jockey John Velazquez, celebrating his first Queen's Plate said, "She was awesome. Finally we got her to pay attention and pass horses. I think the blinkers got her to pay more attention and do her job. When I asked her down the lane, she responded really well." 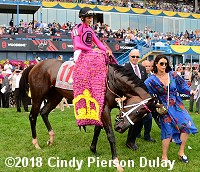 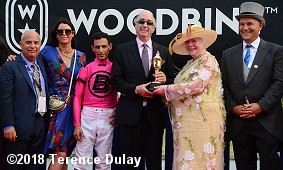 Left: Wonder Gadot parades for the fans after the race. Winning trainer Mark Casse said, "If all goes well, the Prince of Wales could set her up well for the Alabama (at Saratoga). She loves the (10f) distance. I think if she'll stay happy and healthy she's going to be tough. She'll give anybody in North America a run for their money in the Alabama. She just goes and goes. She's Wonder Woman."

Right: The Honourable Elizabeth Dowdeswell, Lieutenant Governor of Ontario presents the Queen's Plate trophy to winning owner Gary Barber. Barber said, "Mark was telling me when he bought her, he said, 'This horse is really special, find a special name.' So I said, 'OK, she's a wonderful horse, let's go with 'Wonder,' and then I matched up (the second part) with the (Wonder Woman) star called (Gal) Gadot." Barber is the only owner to win the Queen's Plate twice with fillies. 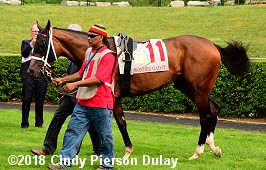 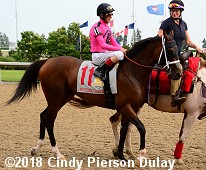 Left: Wonder Gadot in the paddock before the race. Velazquez added, "She was going well the whole way. We broke well, got a good position. By the three-eighths pole there were two horses in front of her and I got to them pretty easily. When I asked her down the lane she responded really well. I was very happy. She had been fighting every race and every battle. She was coming second and third but running her eyeballs out."

Right: Wonder Gadot in the post parade. Barber added, "I love fillies, Mark knows that. We go for pedigrees and runners. We're very blessed to have this one. This was her due, definitely. I feel like she got her deserved reward and she's got better things (to come) down the road." 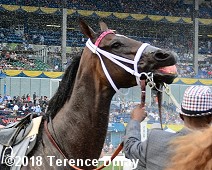 Left: Wonder Gadot gets hosed off after the race. Casse added, "Would Flameaway not like to see Wonder Gadot? Yeah, he probably would rather her not be there. But I don't do that. Just like today, all my riders did their thing, nobody was helping the other one. We have a big stable, we run multiple horses for a lot of people, and you can't do that. You have to let every horse be what they are and get them in the best place. And I think (the Prince of Wales) makes sense for Flameaway, and it probably makes sense for Wonder Gadot, and they'll probably meet."

Right: The 16 horses break from the gate for the 159th Queen's Plate. 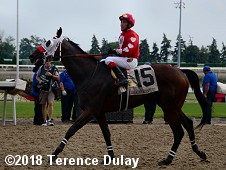 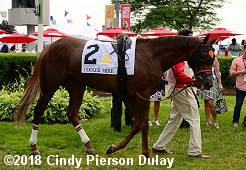 Left: Second place finisher Aheadbyacentury returns after the race. Jockey Luis Contreras said, "I had a great trip. My horse broke okay and I saved a bit of ground. At the half mile I was ready to make my move and the horse in front of me started to drop back and bothered me a little. I moved outside and let him rebreak and he was fine. The winner was very impressive but it would have been very close if nothing had happened on the backstretch."

Right: Third place finisher Cooler Mike in the walking ring before the race. Jockey Jesse Campbell said, "I'm out of breath. I've never been so happy to run third in my life. He ran huge. Well prepared and Nick did a great job getting him ready for today. He ran the race of his life. The winner ran huge. I got my hopes up there for about 70 yards and then I saw them come to my outside and I thought, well, I've got to try and get second." 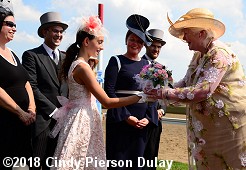 After exiting the landau, she was first welcomed to Woodbine by president and CEO James Lawson then presented with flowers. Lawson then escorted Her Honour across the turf course and up the steps to the Royal Box on the second floor clubhouse.