The $1 million Longines Kentucky Oaks (G1) at 1 1/8 miles is the premier race in the country for 3-year-old fillies, and is the female counterpart to the Kentucky Derby. A full field of 14 faced the starter in the 144th renewal of this 1 1/8 mile main track feature at Churchill Downs, run on Friday before 113,510 fans, under overcast skies and a post time temperature of 80 degrees. As expected, Santa Anita Oaks (G1) and Santa Ysabel (G3) winner Midnight Bisou was sent off as the 2-1 favorite. In to challenge her included 5-2 second choice Monomoy Girl, winner of the Ashland (G1) and Rachel Alexandra (G2), and two fillies at 8-1, Gulfstream Park Oaks (G2) winner Coach Rocks and Gazelle (G2) winner My Miss Lilly.

Jockey Jose Ortiz sent 25-1 Take Charge Paula to the front first time past the stands and she set fractions of 23.48 and 47.70 while pressed by 37-1 Sassy Sienna and stalked by Monomoy Girl. On the far turn jockey Florent Geroux sent Monomoy Girl to the front through 3/4 in 1:11.49. Entering the lane, Wonder Gadot, 4th early under John Velazquez, came out for room and collared Monomoy Girl midstretch through 1 mile in 1:36.67. However, after bumping at the 1/16 pole, Monomoy Girl dismissed her in the final furlong, pulling away for the 1/2 length victory in 1:49.13. It was another 3 3/4 length back to late-running favorite Midnight Bisou third.

Velazquez claimed foul against Geroux for interference over the final 1/16 mile but after investigating the bumping the stewards allowed the result to stand. 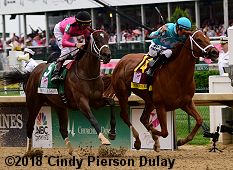 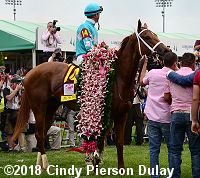 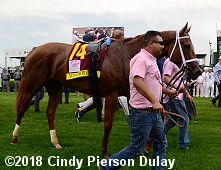 Left: Monomoy Girl in the winner's circle. Winning jockey Florent Geroux, celebrating his first Kentucky Oaks win (in his 3rd try) said, "This is an unbelievable feeling. The filly was sharp early and I just hustled her out of the gate to get a good position. From there I was pretty confident, but when I hit the 1/4 pole, her ears were flopping back and forth and she tried putting the brakes on me until she saw Wonder Gadot. When the other filly got head to head, I gave her a few slaps to keep her interested, but she can be quirky. You can get after her too much and she stops. I kept hand riding her and she pulled away at the end."

Right: Monomoy Girl heads to the winner's circle after the objection was disallowed. Geroux added, "I know we touched. I hit my feet only twice. And I slightly came out. If we won by a nose, maybe they would take a look at it a little bit longer. But, since my filly kind of drew away, I think it was pretty clear to the stewards. I felt like it's not like I hit him ten times, and she keep coming out and it was completely my fault. I hit her maybe once or twice. And she slightly came out. But, since Johnny was very close to me, we never went out of control. So I was very confident. I talked to Brad right away. I was hoping the stewards were making the right decision." 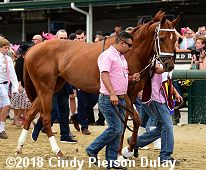 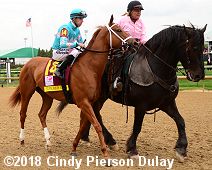 Left: Monomoy Girl walks over before the race. Winning trainer Brad Cox said, "It was unbelievable. It worked out just the way we planned. That was the trip we were hoping for. Florent did a great job getting her out of the gate and getting her into position. She was three wide into the first turn. That was kind of what we expected. It all went well. She was able to put herself where she needed to be and kick on down the lane. She did look like she got a little hesitant at the quarter pole and Florent said he had to stay on to her. She responded and finished strong down the lane."

Right: Monomoy Girl in the post parade with supersized pony horse Harley. Winning co-owner Michael Dubb said, "Today I was really confident. There was no nerves. I knew we had one of the greatest Kentucky trainers in Brad Cox. We had a great Kentucky rider. The horse was here. The horse had the race over the track." Co-owner Sol Kumin added, "Behind a horse there is always a story. We have a great group of partners here and both sides of this horse. We have Liz Crowe. This is one of the first tickets she ever signed. Grade 1 winner and an Oaks winner. That's her hard work and determination. It's interesting. Everybody is saying you got the 14 post. But they're discounting the experience of the team here and understanding the track." 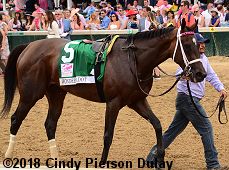 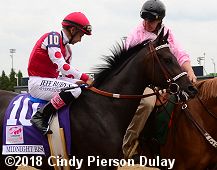 Left: Second place finisher Wonder Gadot circles during the objection. Jockey John Velazquez said, "We were battling head and head down the stretch. When they came out and knocked her sideways, she went back to the left lead. At least I have to take a chance on it. I mean, I'm fighting the whole way around and all of a sudden the last 1/16 mile she goes back to her left lead because she got bumped." Trainer Mark Casse added, "There was contact and it made our filly switch her leads. I think it was going to be really close, but I think the stewards made the right call. To take a horse down in this type of race, it would have to be pretty significant. I think we were right in claiming foul because there was contact three times, and like I said, the third one caused us to jump our lead. She's a tough filly, so I'm proud of her. She's definitely a Wonder Woman."

Right: Third place finisher and beaten favorite Midnight Bisou in the post parade. Jockey Mike Smith said, "The inside horses made a right turn leaving the gate and ran right into me. It cost me quite a bit. It cost me position. I don't know if the bad start cost me the race but it cost me enough. We will never know." Trainer Bill Spawr added, "We didn't get the best of starts. Mike (Smith) told me that when she got banged at the start it knocked the air out of her. She got hit again on the turn (for home). She still ran well." 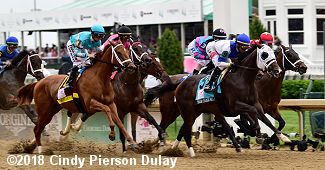 Left: The field breaks from the starting gate in the 144th Kentucky Oaks. Winning trainer Brad Cox said, "She was able to break and get in position. Florent did a good job of getting her out of the gate and hustling. Being caught three wide in the first turn in a 14-horse field, that's not bad. Good horses have to be able to overcome things. And she was able to overcome the wide trip around the first turn and the two wide going in the second turn."

Right: First time by with eventual winner Monomoy Girl on the outside. Jose Ortiz aboard early pacesetter and eventual last place finisher Take Charge Paula (9) said, "My filly had a poor performance today. I was in the right spot the first part of the race. I broke very well, (Classy Act) and (Sassy Sienna) didn't want to go (early) so I went ahead. It was a decent pace for these horses. She went 1/2 mile and then folded."