Kentucky Derby Day is the biggest card of racing at Churchill Downs. Before the main event, there were six graded stakes contested over the main track and turf course before the 157,813 fans who came out on Saturday. Over 5 inches of rain fell all day, gradually downgrading the main track from fast to sloppy and the Matt Winn Turf from firm to yielding, with temperatures in the mid 60's. 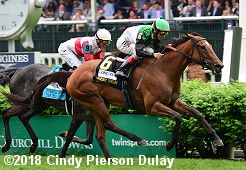 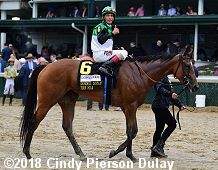 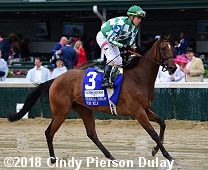 Left: Proctor's Ledge heads to the winner's circle. Winning trainer Brendan Walsh said, "I was a little concerned because she has generally done her best running on fast ground, but we really didn't have any concrete proof that she wouldn't mind a little cut in the ground. Johnny gave her a super ride. She showed the filly she is today. She was going super coming into today. I galloped her a few times and from a condition point of view she was doing really well. I think her best races are still in front of her."

Right: Third place finisher and beaten favorite Dream Awhile returns after the race. Jockey Irad Ortiz Jr. said, "She got into a little trouble and had to wait too long to get out of there. There was kickback and she didn't like that, but she ran a good race to finish third." 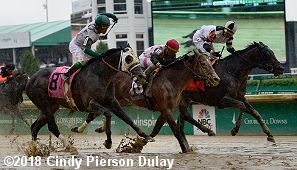 The $500,000 Churchill Downs Stakes (G2) featured a field of 9 older horses sprinting 7 furlongs on the main track. Breeders' Cup Sprint (G1) runner-up Imperial Hint was sent off as the 6-5 favorite over 7-2 Awesome Slew, runner-up in the Carter Handicap (G2) after finishing 3rd in the Breeders' Cup Dirt Mile (G1), and 9-2 Limousine Liberal, second in the Commonwealth (G3). Imperial Hint was quickest away through fractions of 22.10 and 44.57 while pressed by Limousine Liberal and 18-1 Chief Cicatriz. Imperial Hint led to midstretch through 3/4 in 1:09.76 but tired late. Limousine Liberal and jockey Jose Ortiz held off late-running 23-1 Warrior's Club by a head in 1:22.73 over the sloppy (sealed) main track. It was another head back to Awesome Slew third, while Imperial Hint faded to 6th.
Results chart from DRF 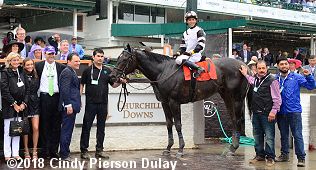 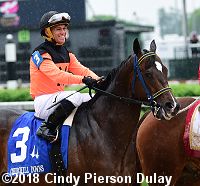 Left: Limousine Liberal in the winner's circle. Winning trainer Ben Colebrook said, "Ideal conditions for him maybe, he loves the wet racetrack and he's a fighter. He just wasn't going to get beat today. He was a little closer (to the pace) I think than we probably had planned, but they didn't go as fast as it kind of looked like. The first quarter was in :22, and I didn't see the half, but I would have thought it would have been :21. And he was a little closer and I think that made the difference. He was able to kind of sneak away there a little bit and then he fought back after they passed him."

Right: Sixth place finisher and beaten favorite Imperial Hint in the post parade. The Luis Carvajal Jr. trainee has a record of 9 wins, 2 second, and 0 thirds in 15 starts, earning $880,155 for owner Raymond Mamone. 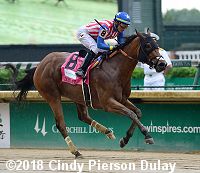 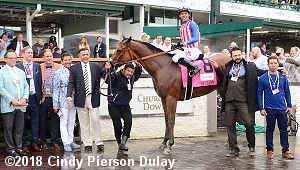 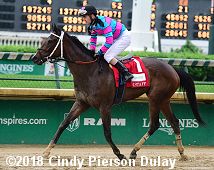 Left: American Gal in the winner's circle. Winning trainer Simon Callaghan said, "When you're on the outside you have more options and she got the most comfortable trip and she's a very good filly. We were concerned because she's never really run on an off track before but she's just got such a good disposition, such a talented filly, she can go in anything. We've definitely seen a good progression out of the last race. She was on the outside today and last time we got a pretty tough trip with a lot of horses on her outside. This time we were on the outside so just a much better trip." 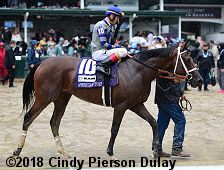 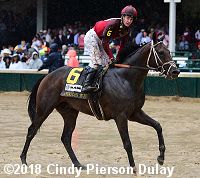 Left: Maraud heads to the winner's circle. Winning trainer Todd Pletcher said, "I thought Johnny gave him a clever ride. He kind of kept him off the rail on the middle of the turf course which seems to be a little bit better and he put in a big run. At Keeneland he just didn't seem to handle the course, wasn't quite himself that day. We were concerned about the weather today and I'm glad we decided to take a shot. We'll probably take him back to New York and see what we have there. I'd love to make a race like the Belmont Derby." Right: Beaten favorite and 5th place finisher River Boyne returns after the race. The Jeff Mullins trainee has a record of 3 wins, 2 seconds, and 0 thirds in 8 starts, earning $211,718 for owner Red Baron's Barn and Rancho Temescal LLC. 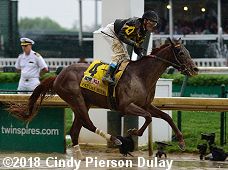 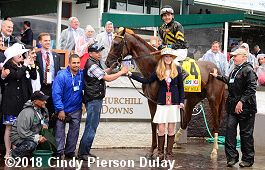 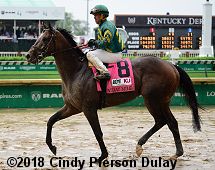 Left: Funny Duck in the winner's circle. Winning trainer Rusty Arnold said, "He had become leaps and bounds better through the winter. His last race (Transylvania at Keeneland), he had some traffic issues, but we like the horse. But he had got good on the turf, and trainers tend to stick with it. When he said to go to the dirt, we did. He had a great work here last week, and we do think he likes the mud, too." Jockey Brian Hernandez Jr. added, "We just went out there. There was no pressure with the horse. He stumbled a bit leaving there. I think it worked to his advantage because when he got up he turned off for me. We were able to find a nice smooth rail trip and had to go around only one horse. He traveled like a winner the whole way."

Right: Eighth place finisher and beaten favorite Mask returns after the race. The Chad Brown trainee has a record of 2 wins, 0 seconds, and 0 thirds in 3 starts, earning $108,760 for owner Lane's End Racing. 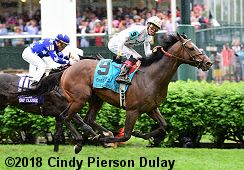 The final stakes of the undercard was the $500,000 Old Forester Turf Classic (G1), a 1 1/8 mile trip over the Matt Winn Turf Course for older horses. A field of 9 went to post with Breeders' Cup Turf (G1) runner-up Beach Patrol the 8-5 favorite over 4-1 Synchrony, winner of the Mervin Muniz Handicap (G3), and 11-2 Kurilov, runner-up in the Gulfstream Park Turf (G1). 11-1 Shining Copper was loose on the lead through fractions of 24.86, 50.61, and 1:16.44 while stalked by Beach Patrol and Kurilov. On the far turn Shining Copper tired, while 10-1 Yoshida, 4th early under Jose Ortiz, moved up to challenge Beach Patrol through 1 mile in 1:41.59. The pair dueled to the line as Yoshida outfinished Beach Patrol late to win by 3/4 length in 1:54.64 over the yielding Matt Winn turf. It was another 3 lengths back to late-running Synchrony third.
Results chart from DRF 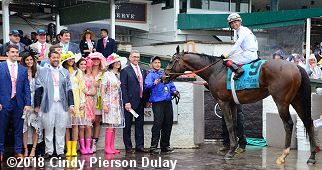 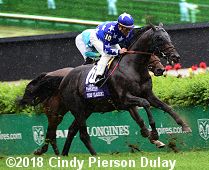 Left: Yoshida in the winner's circle. Winning trainer Bill Mott said, "He had a great trip. It was about what we thought it would be. We knew Shining Copper would be on the lead. We had a little idea that maybe they would send Beach Patrol after him and that put us in the garden spot right behind them. We've nominated him to Royal Ascot going a flat (straight) mile in the Queen Anne Stakes (G1) on opening day. Some of the partners would be very interested in going. If he could run well over there, of course, it would increase his value as a stallion because he could do dual hemisphere." Ellott Walden of owner WinStar Farm added, "He is an unbelievable stallion prospect being out of a G1 winner (Hilda's Passion) and by Heart's Cry, who is by Sunday Silence. We thought if he could win a G1 we thought we would be a great alternative to breeders."

Right: Second place finisher and beaten favorite Beach Patrol first time by. Jockey Joel Rosario said, "It was a good trip. At the 3/8 pole we all went. (Jose Ortiz aboard Yoshida) had too much horse and went by me. My horse came back and fought but that horse ran a big race. My horse handled the turf. He was getting over it good. He was trying. I got beat like a half-length. He was giving me everything he got."