Queen's Plate Day is one of the biggest racedays of the year at Woodbine and always attracts the largest crowd of the year. Those who filled the grandstand and the apron on a sweltering Saturday afternoon were treated to four additional stakes races on the undercard, all over the firm E.P. Taylor Turf Course (GoingStick reading 11.4). It was partly cloudy with temperatures in the mid 90's and with the humidity it felt closer to 114, but thankfully there was a good breeze. Over the former harness track, the new/old Inner Turf Course is gradually taking shape, with the homestretch freshly sodded as of this past week allowing use of the traditional infield winner's circle for the Highlander and Queen's Plate. 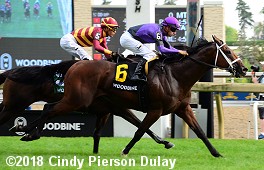 Immediately before the Queen's Plate, a field of 9 older horses contested the $250,000 Highlander Stakes (G1) at 6 furlongs on the turf, and new for this year, along with the upgrade from Grade 2 for the last few runnings, is now a Breeders' Cup Challenge "Win and You're In" qualifier in the Turf Sprint division. Last year's Woodbine Mile (G1) third place finisher Long On Value was sent off as the 9-4 favorite off his win in the Mighty Beau at Churchill Downs. In to challenge him included 5-2 second choice Imprimis, undefeated in 4 lifetime starts including the Jim McKay Turf Sprint last out, and 7-2 third choice Holding Gold, 4th in the Jaipur (G3).

Jockey Luis Contreras sent 54-1 Axtell to the lead through fractions of 22.44 and 43.55 while pressed by 27-1 Corinthia Knight and stalked by 15-2 Lady Alexandra. Entering the stretch, Lady Alexandra took over to gain a 1 1/2 length lead through 5f in 55.49, but Long On Value, 6th early under Florent Geroux, came out 3 wide for the drive and rallied to get up for the win by a head in 1:07.13. It was another 1 1/2 lengths back to Holding Gold third. Due to a timer malfunction this race was hand timed.
Results Chart 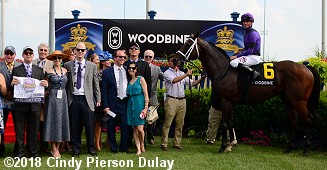 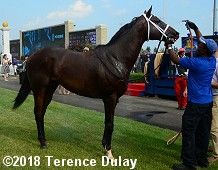 Left: Long on Value in the winner's circle. The Brad Cox trainee improved his record to 9 wins, 5 seconds, and 5 thirds in 32 starts, earning $1,136,253 for owners Madaket Stables, Ten Strike Racing, and Steve Laymon.

Right: Long on Value gets hosed off after the race. Despite the race being a "Win and You're In", he is not Breeders' Cup nominated so he would require to be supplemented into the Turf Sprint for $100,000. 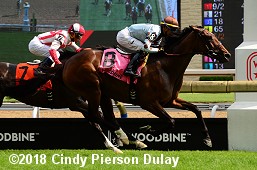 After the arrival of Lieutenant-Governor Elizabeth Dowdeswell, a field of 9 older fillies and mares contested the $175,000 Dance Smartly Stakes (G2) at 1 1/4 miles on the turf. Last year's Queen's Plate winner Holy Helena was the 11-4 favorite off a 5th place finish in the New York Stakes (G2). In to challenge her included 3-1 Inflexibility, runner-up in the Beaugay (G3), and 7-2 Santa Monica, 3rd in the Sheepshead Bay (G2).

Jockey Eurico da Silva sent 9-1 Starship Jubilee to the front through the dogleg through fractions of 25.77 and 49.33 while pressed by Inflexibility, 5-1 Dream Dancing, and 21-1 Mythical Mission. Down the backstretch jockey Javier Castellano sent Inflexibility to lead through 6f in 1:12.46 and 1 mile in 1:35.95. Inflexibility led to the 1/8 pole through 9f in 1:47.52 but Santa Monica, last early under Jose Ortiz, unleashed a strong 5 wide rally the length of the stretch to win by 1/2 a length in 1:59.51. It was a long 3 1/4 lengths back to favorite Holy Helena third.
Results Chart 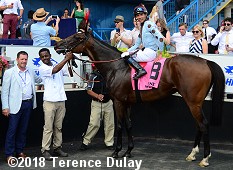 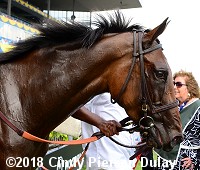 Left: Santa Monica in the winner's circle. Winning jockey Jose Ortiz, celebrating his first win in Canada said, "She was very nice today. She put me into a great position and when I guided her to the clear, she exploded. She's a filly that will go long, way longer than this – a mile and a quarter, a mile and three eights, a mile and a half. She'd be very nice going each of those distances."

Right: Santa Monica heads back to the barn. 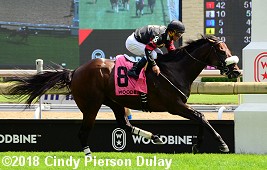 The $175,000 King Edward Stakes (G2) featured a field of 8 older horses going 1 mile on the turf. Delta Prince, unraced since finishing 3rd in the Bernard Baruch (G2) last September, was the 2-1 favorite over 7-2 Caribou Club, winner of the Connaught Cup (G2), and 4-1 First Premio, 2nd in the Opening Verse.

Jockey Rafael Hernandez sent 20-1 Shakimat to the front through fractions of 23.77, 46.58, and 1:09.11 while stalked by Caribou Club and First Premio. Entering the stretch, Shakhimat continued to lead to the 1/8 pole but Delta Prince, 4th early under Javier Castellano, came out 3 wide for the drive and rallied to win by 1 3/4 length in 1:32.35. It was a neck back to 5-1 Conquest Panthera third. Due to a timer malfunction this race was hand-timed.
Results Chart 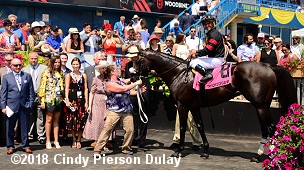 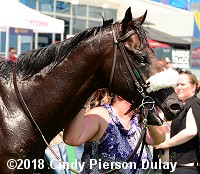 Left: Delta Prince in the winner's circle. Winnig owner-breeder Frank Stronach said, "We had a few problems, but Jimmy Jerkens has always been really high on him. I think the Woodbine Mile would suit him." He noted that Delta Prince is a half brother to 3-time champion Royal Delta. 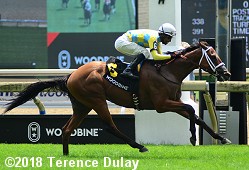 Kicking off the stakes quintet, a field of 7 three-year-olds contested the listed $100,000 Charlie Barley Stakes at 1 mile on the turf. Jeff Ruby Steaks (G3) 7th place finisher Ride a Comet was the 9-4 favorite off an allowance win, over 5-2 Machtree, runner-up in the Marine (G3), and 3-1 Elusive Mischief, an allowance winner after finishing 6th in the William Walker.

Jockey Luis Contreras sent 11-2 fourth chouce El Tormenta to a clear lead of as many as 6 lengths through fractions of 22.61, 45.82, and 1:09.05 while stalked by Elusive Mischief. Entering the stretch, El Tormenta continued to lead through 7f in 1:21.04, but Ride a Comet, 6th early under Patrick Husbands, came out for room and rallied to win going away by 2 3/4 lengths despite Husbands losing his whip at the 1/16 pole. It was a length back to Elusive Mischief third.
Results Chart 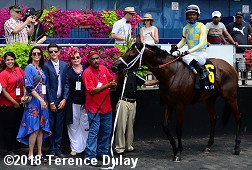 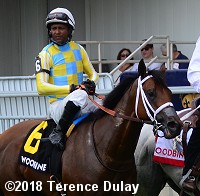 Left: Ride a Comet in the winner's circle. Kathryn Sullivan, assistant to winning trainer Mark Casse said, "I thought Sam-Son's horse (El Tormenta) looked really good. I thought he still had a lot of horse at the top of the turn. But he (Ride a Comet) turns so well."

Right: Ride a Comet returns after the race. Sullivan added, "Patrick was confident every step of the way."