The highlight race of the Turfway Park winter-spring meeting is the $200,000 Jeff Ruby Steaks (G3) (formerly the Spiral Stakes), contested at 1 1/8 miles on the Polytrack. Conditions were excellent for this key Triple Crown prep worth 20 points to the winner as part of the Kentucky Derby Championship Series, run 7 weeks before the Kentucky Derby, with overcast skies and temperatures in the low 40's. A field of 12 three-year-olds went to post on Saturday afternoon, with Breeders' Cup Juvenile (G1) 8th place finisher Hazit sent off as the 3-1 favorite off a second place finish in an allowance last out. In to challenge him included 6-1 second choice Blended Citizen, 3rd in the El Camino Real Derby, and 13-2 third choice Pony Up, 5th in the Holy Bull (G2). 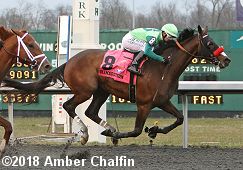 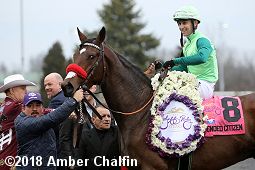 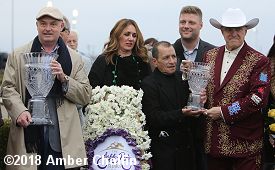 Left: Blended Citizen in the winner's circle. Octavio Vergara, assistant to winning trainer Doug O'Neill said, "Doug sent him here to win and get into the Kentucky Derby. I knew he would run good. Last time out, he should have won the El Camino Real Derby, but he got stopped twice."

Right: The trophy presentation for the Spiral Stakes. Check out the owner's crazy coat! 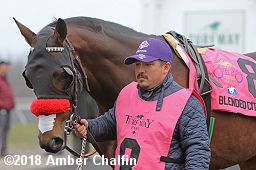 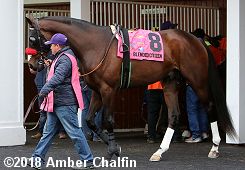 Blended Citizen in the paddock before the race. Winning jockey Kyle Frey said, "We broke a little quicker, and we were a lot closer than I expected, and I had to steady a bit because the outside horse closed in on us early in the race. I wasn't too worried about it. I pulled out of there and waited. About the half-mile pole, it seemed like the race just started to fall apart. As things opened up, I just let Jesus take the wheel. With the way he was moving, all I needed was an opening, and I got it." 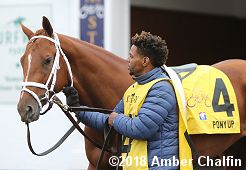 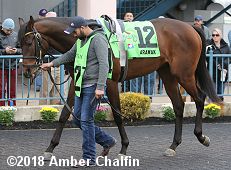 Left: Second place finisher Pony Up in the paddock. Jockey Albin Jimenez said, "I was happy with his effort. I was trying to get clear, and once he got room, he went through. He didn't see the winner on the inside, but he finished real good, just came up short." Amy Mullen, assistant to trainer Todd Pletcher added, "He ran great, just ran out of room. He needed one more jump. The jockey told me once he got in front, he kind of stopped, then the horse came up on the inside of him." 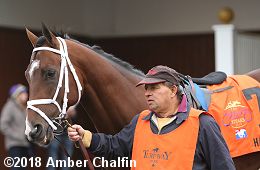 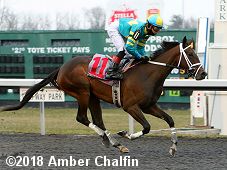 The distaff counterpart to the Jeff Ruby is the $101,600 DRF Bets Bourbonette Oaks (G3), worth 20 points to the winner in the Kentucky Oaks Championship Series. A field of 8 three-year-old fillies went to post in this 1 mile Polytrack contest, with California Oaks winner Consolida sent off as the 5-2 favorite over 3-1 Bet She Wins, unraced since 6th in the Alcibiades (G1) last October, and 7-2 Go Noni Go, 5th in the Sweetest Chant (G3). 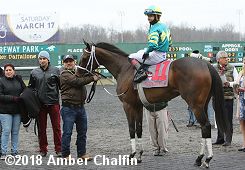 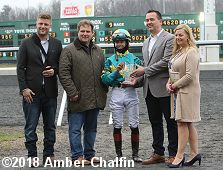 Left: Go Noni Go in the winner's circle. Winning trainer Mike Maker said, "She ran a great race last time out at Gulfstream Park (Sweetest Chant Stakes) but she was in a little bit over her head. We flirted with the idea of running her on dirt but decided to try the Polytrack. And now she's a stakes winner! She's a very slight filly, she struggles with keeping weight on, but she's easy to train."

Right: The trophy presentation for the Bourbonette Oaks. Winning jockey Tyler Gaffalione said, "I've ridden her before and I'm happy we finally got her a stakes win. Everything went as planned. She broke well today, she relaxed, and that was the main thing. Mike and his team did a great job getting her ready for today's race." 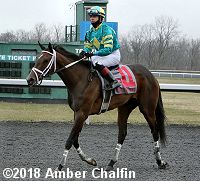 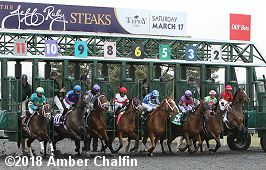 Right: The fillies break from the gate for the Bourbonette Oaks. Jockey John McKee aboard second place finisher In The Mood, said, "She ran great. The trainer did a great job. She was a little keen early. I wish she wouldn't have turned off for me down the backside. She ran her heart out. She finished strong. She just came up a little short today. I have a lot of confidence in the filly. I think she has a lot of ability and talent. The last three times I rode her, she's put her heart out for me. I just got beat by a better horse." 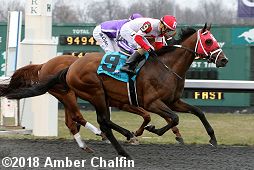 The $100,000 Kentucky Cup Classic featured a field of 10 older horses going 1 1/8 miles. Prairie Bayou winner Royal Son was sent off as the 6-5 favorite over 4-1 Chip Leader, winner of 3 straight allowance contests, and 5-1 Camelot Kitten, 4th in the John B. Connally Turf Cup (G3). 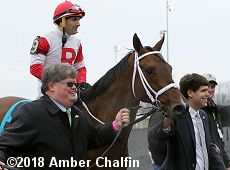 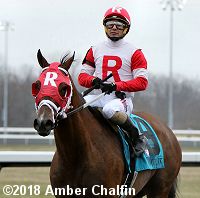 Left: Camelot Kitten heads to the winner's circle led by Jeff Ramsey. Winning trainer Mike Maker said, "There was an honest pace up front, and he was able to capitalize on it. Kitten's Joy has had a ton of success on the synthetic, and we had other horses for other races, so we were just trying to split them up." Jockey Rafael Hernandez added, "We had a great trip, with only one speed horse outside of me. The rest of the speed was inside. Down the backstretch I had a clear path and just waited to make the right move. I was very happy with my position throughout. He picked it up and finished well."

Right: Camelot Kitten returns after the race. Jeff Ramsey of owner Ramsey Farm said, "We had a change of trainer, so I'm sure that had something to do with it, but Chad (Brown) did a great job with him, and Mike's just a little different. Horses just change and grow and get older, and different things work for them." 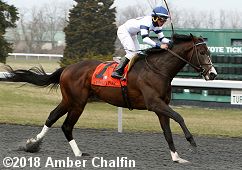 The $75,000 Rushaway Stakes featured a field of 11 three-year-olds going 1 1/16 miles on the Polytrack. Honorable Treasure was the 7-2 favorite over 11-2 Believe in Royalty and 6-1 Violent Storm. 58-1 Giant Honor set the pace of 24.60 and 48.11 while pressed by 15-2 Alternative Route and stalked by 0-1 Truth Be Tolled. On the far turn Alternative Route gained a short lead over Truth Be Tolled through 3/4 in 1:12.49 and led into the stretch through 1 mile in 1:39.59. Kept to task by Mitchell Murrill, Alternative Route drew clear to win by 1 3/4 length in 1:46.38. It was a neck back to 10-1 Year of the Kitten third while Honorable Treasure checked in 7th. Jockeys Tyler Gaffalione aboard Year of the Kitten and Drayden Van Dyke aboard 4th place finisher Road of Damascus both claimed foul against Euclyn Prentice Jr. aboard Truth Be Tolled for interference in the stretch. After an inquiry the stewards disqualified Truth Be Tolled and placed him 4th. 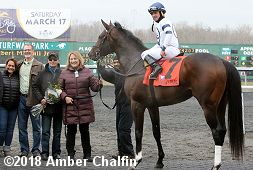 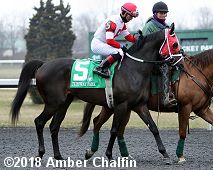 Left: Alternative Route in the winner's circle. Winning jockey Mitchell Murrill said, "We had a great trip sitting up there near the speed. That was the place to be if you go off the earlier races. You have to push him along out of the gate, sort of nudge him a little bit, but he ran great, especially down the lane." 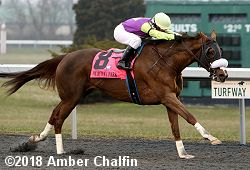 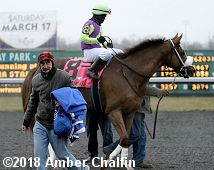 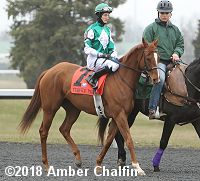 Left: Sky Flower returns after the race. "I knew I had to be close," said winning jockey John McKee. "I had to make a middle move. I didn't want Albin (Jimenez) on Julerette to get away from us. I knew the speed was on the outside of me, and I wanted her to get a good trip on the inside and relax down the back stretch."

Right: Second place finisher and beaten favorite Purely a Dream in the post parade. The Ken McPeek trainee improved her record to 2 wins, 2 seconds, and 0 thirds in 8 starts, earning $123,369 for owner Livin The Dream Racing 2015 LLC.