There are three other graded stakes races on Woodbine Mile day, conducted under sunny skies and temperatures in the mid 80's (heat index 100), with the E.P. Taylor turf course rated good-to-firm (GoingStick reading 10.8). The longest race on the card was the $300,000 Northern Dancer Turf Stakes (G1) for older horses going 1 1/2 miles, one complete lap of the course as the major local prep for the Pattison Canadian International (G1) on October 13. A field of 10 went to post with Dubai Sheema Classic (G1) winner Hawkbill sent off as the 9-5 favorite off a 4th place finish in the Coral Eclipse (G1) at Sandown after finishing 3rd in the Prince of Wales's (G1) at Royal Ascot. In to challenge him included 3-1 second choice Mekhtaal, 2nd in the Nijinsky (G2), and 4-1 third choice Patterson Cross, 3rd in the John's Call at Saratoga last out. 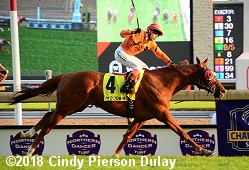 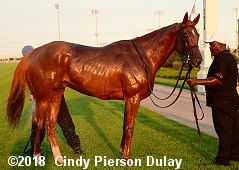 Left: Johnny Bear in the winner's circle. Winning co-owner John Brnjas said, "He's quite a horse. I wish I had a barnful of them."

Right: Johnny Bear gets hosed off after the race. Winning jockey Luis Contreras wore a sombrero in the winner's circle and his wife and children were dressed in traditional Mexican attire. He said, "It is Independence Day in Mexico today. We're supporting everyone back home and Canelo (Alvarez, boxer) is fighting today (against Gennady Golovkin) and we're excited to see him fighting tonight!" 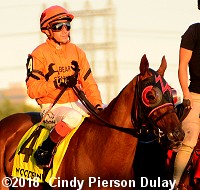 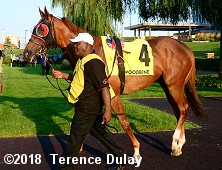 Right: Johnny Bear circles after the race. Contreras added, "He was very good in the post parade. He didn't break a sweat. He was nice and relaxed, and I could feel some power underneath. He was listening to me at every point of the race. If I took a little bit of a hold, he came back to me. It was a perfect trip. I saved all the ground, so nice and relaxed behind the speed, and I was just waiting for my moment. This was one of my best trips around the track. Turning for home, my first thought was to go the outside but at the last second, I changed my mind and I didn't see anybody coming on the rail. I saw the rail was a little bit open and he just went through like a knife through butter." 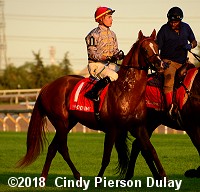 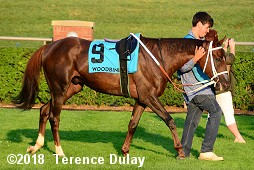 Left: Second place finisher Mekhtaal behind the starting gate. Jockey Jose Ortiz said, "I saved all the ground. I followed Luis and it seemed like he was full of horse the whole way, so I decided to follow him. He dived in, I went out. He got through on the rail and I got out. If he didn't get through, I probably could have won it, but he got through. It was a good ride by him."

Right: Third place finisher English Illusion in the paddock before the race. The Sylvain Pion trainee improved his record to 4 wins, 2 seconds, and 6 thirds in 27 starts, earning $273,030 for owner 4U Thoroughbred Racing Stable. 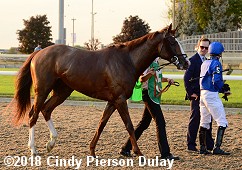 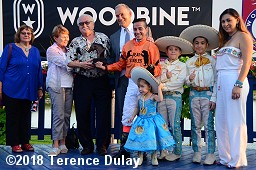 Left: 8th place finisher and beaten favorite Hawkbill unsaddles after the race. Jockey Jamie Spencer said,  "He got harried by the other horse (Tiz a Slam) the whole race. It ruined his race and mine."

Right: A shot of the trophy presentation showing the entire Contreras family in their Mexican garb. 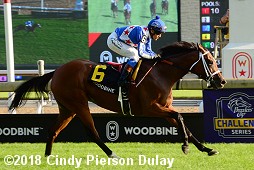 Immediately after the Woodbine Mile, the $250,000 Canadian Stakes (G2) Presented by the Japan Racing Association featured a field of 6 older fillies and mares going "about" 1 1/8 miles around 1 turn of the turf. Inflexibility was sent off as the even-money choice off her 5th place finish in the Beverly D (G1) after finishing 2nd in the Dance Smartly (G2). In to challenge her included 9-5 second choice New Money Honey, 6th in the Diana (G1), and 13-2 third choice Hallie Belle, 4th in the Yellow Ribbon (G2) at Del Mar.

Jockey Rafael Hernandez sent 10-1 Daring Duchess to the lead exiting the chute through fractions of 23.08 and 45.68 while pressed by New Money Honey and stalked by Inflexibility. On the turn, Daring Duchess tired allowing New Money Honey to inherit the lead at the 3/8 pole. However, entering the straight, 12-1 Starship Jubilee, last early under Luis Contreras, circled the field 3 wide to lead at the 1/8 pole, then powered away late to win by 3 1/4 lengths over New Money Honey in 1:42.91, just 4/100 off the course record. It was a head back to favorite Inflexibility third. 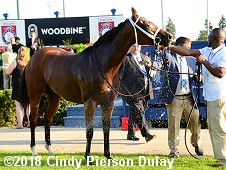 Left: Starship Jubilee in the winner's circle. Winning jockey Luis Contreras said, "She was really good. Kevin told me in the paddock just to get her to relax, that's the best way she can finish the race, and he was right. I was waiting. I got a perfect trip. She helped me a lot. When I got her to relax, she was nice and calm early. Once I hit the three-eighths, I saw my room and I went through and she gave me everything from there." Owner Soli Mehta added, "I love this horse. We thought we had a great shot. You only had to worry about Chad Brown's 5 horse [New Money Honey]."

Right: Starship Jubilee gets hosed off after the race. Winning trainer Kevin Attard added, "I made a few mistakes with her early this year. We sent her home for a break and she kind of just didn't swing back after that vacation. We needed a confidence builder in her and we found one for her and she was pretty authoritative that day. She came into this race and she worked lights out last week and I just had a good feeling that if we had a good trip, she'd come running down the lane." 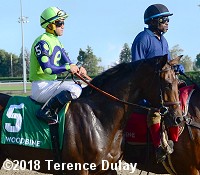 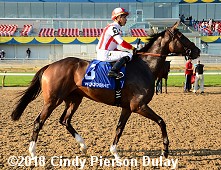 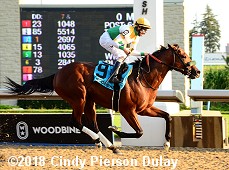 The $125,000 Bold Venture Stakes (G3) featured a field of 9 older horses sprinting 6 1/2 furlongs on the Tapeta main track. As expected 2017 Horse of the Year Pink Lloyd was the 6-5 favorite off wins in the Vigil (G3) and Kenora. In to challenge him included 3-1 second choice Kingsport, winner of the Elgin, and 5-1 third choice Yorkton, 2nd in the Vigil (G3). 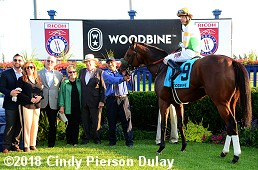 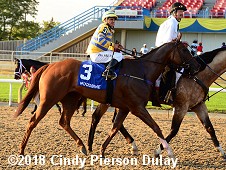 Left: Yorkton in the winner's circle. Winning jockey Jesse Campbell said, "My hat's off to this horse. He ran through his bridle today. I've loved this horse since he was a 2-year-old."

Right: Fifth place finisher and beaten favorite Pink Lloyd returns after the race. Pink Lloyd broke through the gate unseating jockey Eurico Rosa da Silva, but was caught by the outrider, walked back to the gate and after inspection by the veterinarian, was allowed to compete. 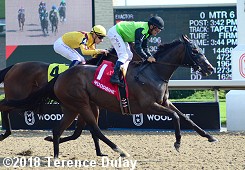 Kicking off the stakes action on Saturday was the $100,000 Sweet Briar Too Stakes for older fillies and mares also sprintig 6 1/2 furlongs on Tapeta. Defending champion Moonlit Promise was the 3-2 favorite in the field of 7 over 5-2 Malibu Bonnie and 7-2 Victory to Victory. 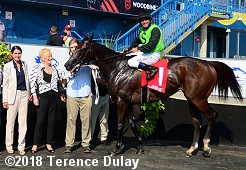 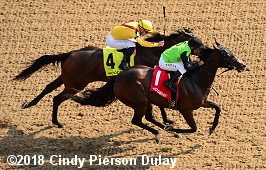 Left: Moonlit Promise in the winner's circle. Winning trainer Josie Carroll said, "She's had a lot of troubled trips this year and lost her focus a little. So we put a set of blinkers on her today and Eurico gave her an aggressive ride and got her back on her game. We needed to change something up a little bit and get this mare back focused because she's a very, very talented mare who hasn't really performed as well as we had expected this year."

Right: A different view of the finish from the press box balcony. Winning jockey Eurico Rosa da Silva added, "I had so much good feelings about her when I was behind."