The $800,000 million Ricoh Woodbine Mile (G1) celebrated its 22nd renewal on Saturday afternoon. Run at 1 mile around one turn of the E.P. Taylor Turf Course, it features some of the best turf milers in North America and Europe looking for an automatic entry into the Breeders' Cup Mile under the Win and You're In promotion. It was unusually warm for mid September in Toronto, with sunny skies, minimal wind, and temperatures in the mid 80's, feeling closer to 100 with the humidity. The course was officially rated firm, but with a 10.8 GoingStick reading, would be called "good-to-firm" in Europe.

After the filly La Sardane was scratched, a field of 8 went to post with King Edward (G2) winner Delta Prince sent off as the 9-4 favorite exiting a close second in the Fourstardave (G1) at Saratoga. In to challenge him included 11-4 second choice Oscar Performance, pulled up in the Arlington Million (G1) after winning the Poker (G3) at Belmont, and 13-4 third choice Lord Glitters, shipped in from England where he won the Strensall (G3) at York after finishing 3rd in the Sussex (G1) at Goodwood. 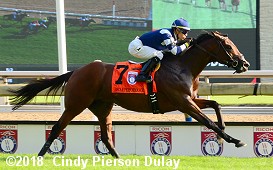 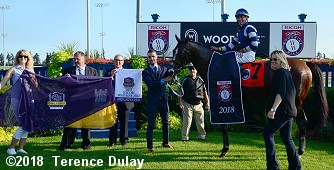 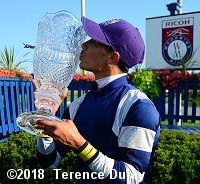 Left: Oscar Performance in the winner's circle. Winning trainer Brian Lynch said, "It is a very prestigious race. It's nice to be able to put your name beside it. Throughout your career, there are signature races you'd like to win and mine has always been to win the Woodbine Mile. It's nice to accomplish that. I thought Jose rode him beautifully and his last quarter was sensational. It's nice to see him back and it's a 'Win and You're In' and we've got six weeks to the Breeders' Cup. Now we can take a deep breath and do the best we can to have him right on that day." 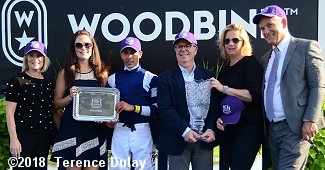 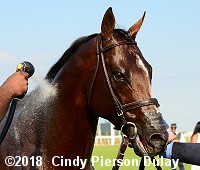 Left: The trophy presentation. Lynch added, "I figured with the scratching of the filly (La Sardane), he'd be the speed of the race and he looked very comfortable throughout. I talked to Jose earlier in the day and said, 'I'm not going to tell you how to ride the race, but the only thing I can tell you is it's a hell of a long stretch there, so be patient.'"

Right: Oscar Performance gets hosed off after the race. Winning jockey Jose Ortiz said, "At the quarter pole, I saw somebody (Mr Havercamp) getting close to me. But when I asked him to go, he really accelerated. He gave me a great turn of foot and he kept going. It's very special. I'm very emotional right now. He's my favourite horse. He gave me my first Breeders' Cup, I'm just happy he's back." Oscar Performance gave both jockey and trainer their first Breeders' Cup wins, in the 2016 Juvenile Turf (G1). 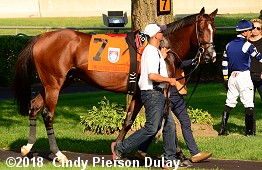 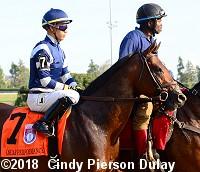 Left: Oscar Performance in the paddock before the race. Erin Lynch, assistant and wife of trainer Brian added, "He gave us a lot of confidence going into this race from the way he'd been working. I think Jose rode him very confidently, established an early lead and dictated the terms. I wouldn't say he wasn't pressured, (Mr Havercamp) was sitting no more than three-quarters of a length off him at a real critical stage of the race, but obviously Oscar was back on his 'A' game today. He gave us that signature move when he asked him to open up, and he maintained." 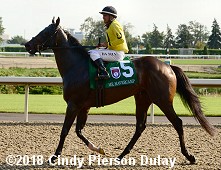 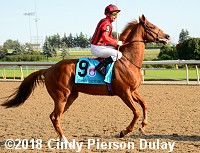 Left: Second place finisher Mr Havercamp returns after the race. Jockey Eurico Rosa da Silva said, "I'm so proud of him. He gave it his best. We went a very slow pace for this race, but I needed to make a decision. If I pressed the pace, I would probably lose second. No, not at any point (was Mr Havercamp closing the gap). I was hoping but I saw (Ortiz) had a little more horse than I did. I'm very happy to finish second."

Right: Third place finisher Stormy Antarctic acts up in the post parade. Jockey Gerald Mosse said, "Lovely run. Not a good draw to be able to be behind the first two. Had an ideal scenario and was coming like he was going to do something, but the ground is a bit quick for him. If the ground was a bit on the soft side, he'd have been a solid contender. He still gave me his best, but he needed a little bit more give in the ground." 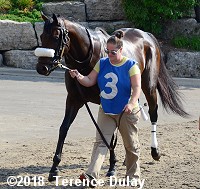 Fourth place finisher and beaten favorite Delta Prince walks over before the race. Jockey Javier Castellano said, "Really disappointing, He didn't show up today for some reason. He was flat. Had a nice comfortable rhythm behind the winner, but when I asked him at the top of the stretch, he just didn't respond."