The $800,000 million Ricoh Woodbine Mile (G1) celebrated its 21st renewal on Saturday afternoon. Run at 1 mile around one turn of the E.P. Taylor Turf Course, it features some of the best turf milers in North America and Europe looking for an automatic entry into the Breeders' Cup Mile under the Win and You're In promotion. Conditions were excellent with clear skies and temperatures in the low 80s, with the turf rated good-to-firm (GoingStick 10.7).

World Approval was sent off as the 9-4 favorite in the field of 12 off wins in the Fourstardave Handicap (G1) at Saratoga and the Dixie (G3) at Pimlico, but was 5th in the Manhattan (G1) at Belmont. In to challenge him included 3-1 second choice Deauville, off a close 3rd in the Arlington Million (G1) after finishing second buy a head in the Meld Stakes (G3) at Leopardstown, and 9-2 third choice Lancaster Bomber, second in last year's Breeders' Cup Juvenile Turf (G1), here off a 2nd place finish in the St. James's Palace (G1) at Royal Ascot followed by a 6th place finish in the Sussex (G1) at Goodwood.

Jockey Gary Boulanger sent 68-1 Dragon Bay to the lead and he set fractions of 23.77 and 46.45 while pressed by World Approval and stalked by Deauville and 11-1 Conquest Panthera. On the far turn, Dragon Bay tired allowing World Approval to inherit the lead through 3/4 in 1:10.31. Lancaster Bomber, 9th early under Wayne Lordan, came out 4 wide for room for his rally, but World Approval, confidently ridden by John Velazquez, was already 2 1/2 lengths clear through 7f in 1:21.45, and held that advantage to the finish post, completing the trip in 1:33.05 over good-to-firm going. It was another 1/2 length back to late-running 19-2 Long On Value third. 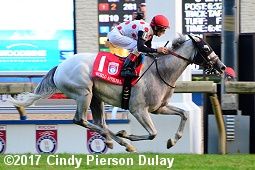 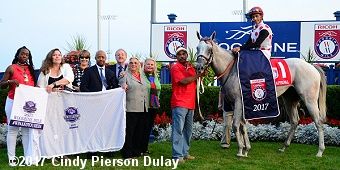 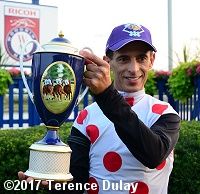 Left: World Approval in the winner's circle. Winning trainer Mark Casse said, "It's always sweet to win big races (2nd in a row after Tepin last year), but it means more at Woodbine. We had horses running all over the place and Mrs. (Charlotte, owner) Weber said she was going so I said, 'Well, can you handle it?' and she said she could. I was at command central in Keeneland buying horses and we had them running everywhere so it was last minute and I just decided not to come. She said she was going. We're trying to buy the next Woodbine Mile winner. I just wasn't sure how he would quicken with not having the target. That's one of the things that seems to work for him when he has a target, he quickens a little better. I was a little concerned with that, but he's a great horse, he a professional, ridden by a great rider."

Right: Winning jockey John Velazquez poses with the trophy. Velazquez said, "He was going so well the whole way around, I was just hoping when he switched down the lane, and I asked him, that he would respond. That's exactly what he did. As soon as he switched, I let him know, he took off. He was ready. I wasn't sure who the speed horse was going to be and I see he's always been pretty close to the pace. He broke well today, no one seemed to want the lead, I just kind of left him there and he held on very well. He's a very, very nice horse, I'll tell you that. Maybe they found the distance he wants to do." 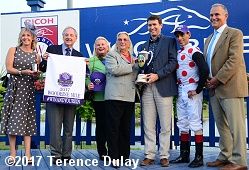 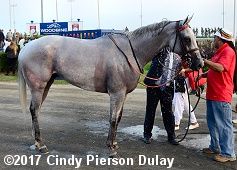 Left: The trophy presentation. John Velazquez added, "No one seemed to want to be on the lead. He broke really well so I kind of let him do it for the first 1/16 mile to see what everybody else was doing. So I kind of held the whole group all the way into the middle of the track to see if anybody wanted to take the lead and no one went. When I got to the turn, I dropped in. I kind of sat against him and he was really well, he settled really nice. About the 5/16 pole, put the head in front of other horse and felt the other horses coming. At the 1/4 pole, I asked him to run and he responded right away and he got away from the horses pretty easily."

Right: World Approval gets hosed off after the race. Winning owner Charlotte Weber (Live Oak Plantation) said, "I couldn't be more thrilled, more excited for the farm, for Woodbine. I've been waiting to win here and be here so this is it. Johnny did a beautiful job, he saved ground, the horse seemed to be happy where he was and he just stayed there and took the race away. I am thrilled." 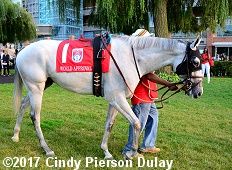 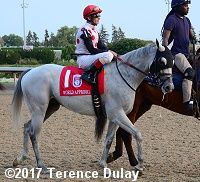 Left: World Approval in the paddock before the race. Casse added, "As long as he's healthy, we are going to the Breeders' Cup. Am I confident we can win? I don't think I would change places with anybody. I think he's good right now. I thought his race was impressive. It's not exactly the way he wants to run. I've said all along, I think he wants a target, but there wasn't a whole lot of speed and Johnny realized that and rode him accordingly. I think he can do anything. We found the mile is what he wants. We're excited to be going to the Breeders' Cup. I'm excited. Mrs. Weber's been a big part of my life for a long, long, long time. We both grew up in Ocala. She's been there and Live Oak has been part of Ocala for 50 years so this was special. It was nice for her to be there. She had never been there (at Woodbine) for a win before so that was nice."

Right: World Approval in the post parade. This is Velazquez's 5th Woodbine Mile win. He won in 2000 aboard Riviera, 2005 aboard Leroidesanimaux, 2012 and 2013 aboard Horse of the Year Wise Dan, and now 2017 with World Approval. 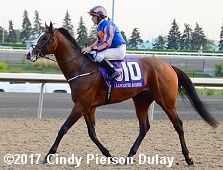 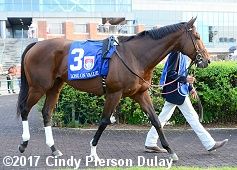 Left: Second place finisher Lancaster Bomber returns after the race. Jockey Wayne Lordan said, “I thought the race was run really steady for my horse. He quickened well and got to the line well. He ran a good race. He finished out good. Maybe a stronger pace might have helped, but he ran a good solid race.”

Right: Third place finisher Long On Value in the paddock before the race. Jockey Joel Rosario said, “I just didn’t have any luck to get out. In the end, I never got through and had to point towards the outside and he lost a little momentum. He ran a very impressive race.” 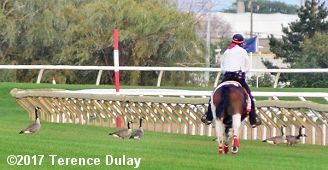 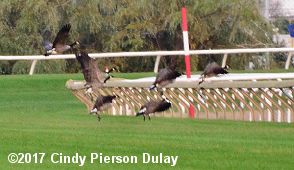 The start of the Woodbine Mile was delayed by a family of geese who decided the top of the stretch was a great place to take a rest. The horses had to be taken out of the gate while an outrider was sent around to chase them off. They resisted a bit but eventually took flight.