There are three other graded stakes races on Woodbine Mile day, conducted under sunny skies and temperatures in the low 80's, with the E.P. Taylor turf course rated good-to-firm (GoingStick 10.7). The longest race on the card was the $300,000 Northern Dancer Turf Stakes (G1) for older horses going 1 1/2 miles, one complete lap of the course as the major local prep for the Pattison Canadian International (G1) on October 19. A field of 8 went to post with Hawkbill sent off as the 3-5 favorite off a second place finish in the Grosser Preis von Berlin (G1) at Hoppegarten after winning the Princess of Wales's Arqana Racing Club Stakes (G2) at Newmarket. In to challenge him included 3-1 Messi, third in an allowance at Saratoga after finishng 9th in the United Nations (G1) at Monmouth, and 15-2 Noble Thought, second in the Sky Classic (G2). Due to Hawkbill's prohibitive odds, show wagering was cancelled. 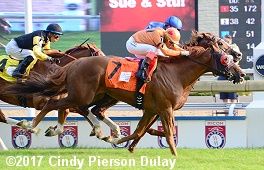 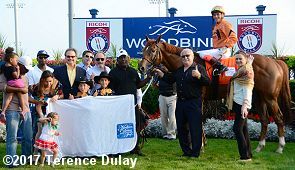 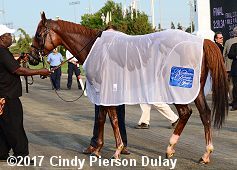 Left: Johnny Bear in the winner's circle. Winning co-owner John Brnjas said, "I had faith in this horse, right from the beginning, and I didn’t give up on him. When I entered him in the Northern Dancer, the Bear [co-owner Danny Dion] said, ‘Are you kidding me?’ I hope he’s happy now. He ran a great race in the Halton and I thought he deserved a shot in this."

Right: Johnny Bear heads back to the barn after the race. Winning trainer Ashlee Brnjas, celebrating her first graded win said, “We fought hard for this horse, because when we got him he was a nice horse, but he was the equivalent of a marshmallow. It took a long time for him to develop, and we stuck it out, and it was the right decision.” 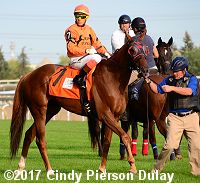 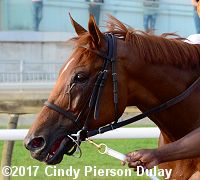 Left: Johnny Bear behind the starting gate. Winning jockey Luis Contreras said, “I was just thinking just stay behind (Hawkbill) and follow him as much as I can, and wait for the end to make my move. It worked perfect.” 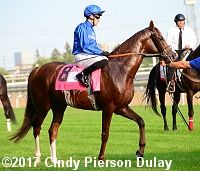 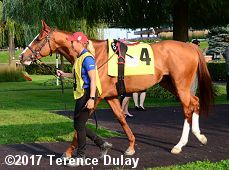 Left: Second place finisher and beaten favorite Hawkbill behind the starting gate looking very washed out. Jockey Colm O'Donoghue said, “He travelled well and moved great. He hit the line strong and it was a bob of the heads, and unfortunately, it didn't go his way. The other horse coming encouraged him to go forward again. I thought he would have held, but that's how it goes.”

Right: Third place finisher Messi in the paddock before the race. The Graham Motion trainee has a record of 6 wins, 5 seconds, and 5 thirds in 26 starts, earning $483,161 for owner-breeder Gestut Brummerhof. 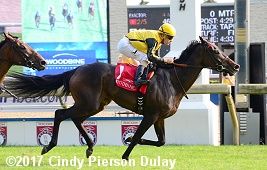 The $250,000 Canadian Stakes (G2) featured a field of 7 older fillies and mares going about 1 1/8 miles around 1 turn of the turf. Quidura was sent off as the 2-5 favorite off second place finishes in both the New York (G2) and Diana (G1). In to challenge her included 9-2 second choice Elysea's World, a close 4th in the De La Rose at Saratoga, and 15-2 Starship Jubilee, winner of the Dance Smartly (G2) .

Jockey Gary Boulanger sent 13-1 Involuntary to the lead exiting the chute and she set fractions of 24.60 and 48.78 while pressed by Starship Jubilee and stalked by 63-1 Southern Gem. At the top of the lane Involuntary tired allowing Starship Jubilee to inherit the lead. Quidura, 4th early under Junior Alvarado, came through between horses to outfinish Elysea's World by a length in 1:45.36. It was another 3/4 length back to Starship Jubilee third. 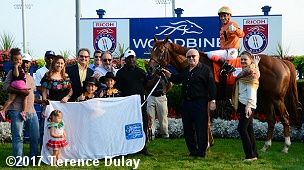 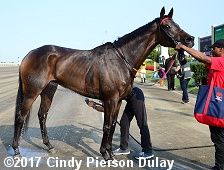 Left: Quidura in the winner's circle. Winning trainer Graham Motion (far left) said, "I ran her here today because of the timing. I really hope to take her to Del Mar for the Breeders' Cup.”

Right: Quidura gets hosed off after the race. Winning jockey Junior Alvarado said, "I wanted to make sure I got cover. I knew I had horse. Any time I wanted to split horses or do something, I knew she was there for me so I wasn't worried. We were pretty much just waiting to turn for home. Then I found my spot and after that she was there for me, gave me a nice kick. After that I just wrapped it up again, tried to save it for the next time.” 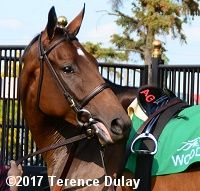 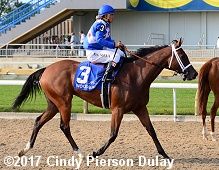 Left: Second place finisher Elysea's World in the paddock before the race. The Chad Brown trainee has a record of 3 wins, 4 seconds, and 1 third in 13 starts, earning $286,603 for owners Sheep Pond Partners and All Pro Racing.

Right: Third place finisher Starship Jubilee returns after the race. He has a record of 8 wins, 1 second, and 1 third in 16 starts, earning $284,161 for owner-trainer Kevin Attard and co-owner Soli Mehta. 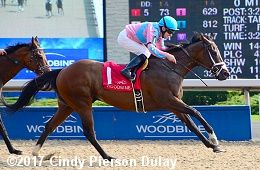 Kicking off the stakes action for the day, the $125,000 Bold Venture Stakes (G3) featured a field of 6 older horses sprinting 6 1/2 furlongs on the Tapeta main track. Unbridled Juan, 4th in both the Seagram Cup (G3) and King Edward (G2) was the 9-5 favorite over 3-1 Circle of Friends, 4th in the King Corrie, and 5-1 Ikerrin Road, an allowance winner last out. 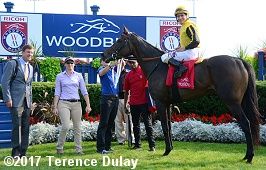 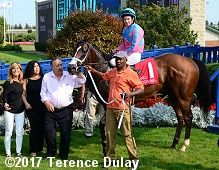 Left: Ikerrin Road in the winner's circle. The Vito Armata trainee has a record of 7 wins, 2 seconds, and 2 thirds in 20 starts, earning $196,978 for owner Alpine Stable Ltd.

Right: Ikerrin Road gets hosed off after the race. 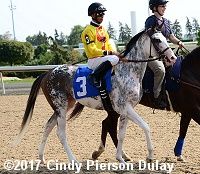 Starresha is a British Columbia-bred 2-year-old filly by Second in Command out of Painting Shadows by Airdrie Apache. Airdrie Apache, whose markings are similar to Starresha's, is one of the top sires of Thoroughbred horses with flashy markings and was also the sire of the first white Thoroughbred to be registered, Silver Mystique. Her dam, Painting Shadows, is very plain but obviously is passing along the fancy color genes. Despite her markings, she is officially registered as a bay.

After finishing 5th in her debut, a maiden special weight 6 furlong turf sprint on July 8, she was entered in a similar turf sprint in August but was scratched when the race was moved to the Tapeta due to rain. On the Woodbine Mile undercard she ran in a 6 furlong sprint on Tapeta, but clearly did not like the surface as she finished last of 12 beaten 27 1/2 lengths. 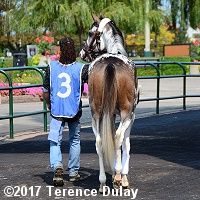 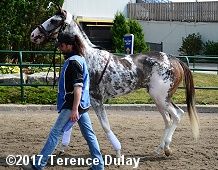 Left: Starresha heads into the paddock, giving you a view of her markings from behind.

Right: Starresha walks over from the barn before the race.