The $400,000 Breeders' Stakes is the third and final race of Canada's Triple Crown restricted to 3-year-olds foaled in Canada. A field of 10 contested the 127th renewal of this 1 1/2 mile classic, one complete lap of the E.P. Taylor Turf Course on Sunday afternoon. It was a typical summer day at Woodbine, with partly cloudy skies and temperatures in the low 80's, with the turf course rated firm (GoingStick 11.5). Channel Maker was sent off as the 7-4 favorite, despite being winless since the Vandal Stakes as a juvenile and coming off a 4th place finish in the Queen's Plate. In to challenge him included 9-2 second choice Final Copy, winner of the Toronto Cup Stakes, and 6-1 third choice Cool Catomine, winner of the Prince of Wales Stakes.

Jockey Jesse Campbell sent 15-1 Major Eclipse to the lead first time by the stands and he set easy fractions of 26.35, 51.46, 1:16.41, 1:40.81, and 2:05.41 while pressed by Cool Catomine and stalked by Final Copy. Entering the lane, Major Eclipse tired as Channel Maker, 9th early under Rafael Hernandez, came out 7 wide for the drive to gain a short lead at the 1/8 pole. Final Copy attempted to close on the inside but Channel Maker prevailed by a nose in 2:29.70. It was another 1/2 length back to late-running 12-1 King and His Court third. After the race, 3 different claims of foul were lodged. David Moran aboard 4th place finisher 7-1 Seeking Albert and Jerome Lermyte aboard 9th place finisher 19-1 Glencairn both claimed interference in the stretch run against Hernandez aboard the winner. In addition, Alan Garcia aboard 5th place finisher 23-1 Woodbridge claimed foul against Patrick Husbands aboard runner-up Final Copy for interference soon after the start. All three claims were disallowed by the stewards and the result stood. 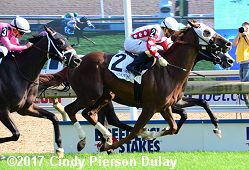 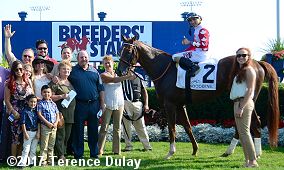 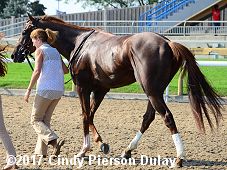 Left: Channel Maker in the winner's circle. Winning jockey Rafael Hernandez said, "Down the lane, he was just laying over a little bit when he switched to the lead and didn't bother anybody as the inquiry showed. I think he's a good horse, he's been showing up every time he's been running and we won so that's good. The plan was good and we made the plans go through."

Right: Channel Maker heads back to the barn after the race. 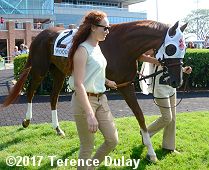 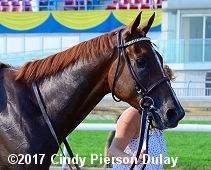 Left: Channel Maker circles while the stewards make their decision about the objections.

Right: Channel Maker in the paddock before the race. Hernandez added, "The other horse for Attfield (Final Copy), he started coming back. I had a head in front of him and then we'd get head-to-head and he tried to come back right there in the end, but my horse kept going. He kind of made a move (in the Plate) like he was going to go win the race and then he just stopped a little bit and came back again. That's why Joey (Guerrieri, owner) said we're going to put him on the grass, he's always been better on the grass and we waited for this race and he prepared for this race and he showed up today. It's great." 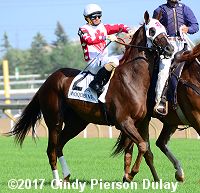 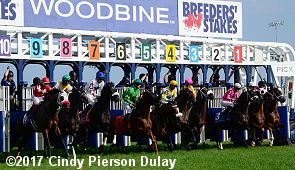 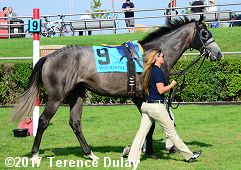 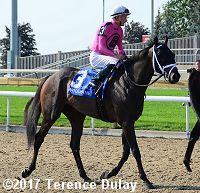 Left: Second place finisher Final Copy in the paddock. Jockey Patrick Husbands said, "He ran game. He really fought back hard. The last jump and a half, I thought he was going to catch him."

Right: Third place finisher King and His Court returns after the race. Jockey Gary Boulanger said, "He trained really good going into this and his last race (3rd in the Toronto Cup) he needed pretty badly. He didn't do a whole lot going into that race and still ran a good third. Today, he really tried hard. The last 100 yards he got a little flat on me, but it was a big effort."

An hour before the Breeders' Stakes, a field of 6 older horses contested the $175,000 Sky Classic Stakes (G2) over 1 3/8 miles on the turf, a local prep for the Northern Dancer Turf (G1) and the Canadian International (G1). United Nations (G1) and Nijinsky (G2) runner-up Can'thelpbelieving was sent off as the even-money favorite over 5-2 Starship Jubilee, dead-heat winner of the Dance Smartly (G2) and 7-2 Dragon Bay, winner of the Nijinsky.

Starship Jubilee led the field up the hill and around the bend through an opening quarter in 25.91 before Dragon Bay took over on the backstretch through fractions of 50.92, 1:15.68, and 1:39.74. Entering the lane, Dragon Bay tired as Can'thelpbelieving, 4th early under Joe Bravo, angled out 3 wide for the drive to gain the lead at the 1/8 pole. 10-1 Noble Thought, 5th early under Patrick Husbands, put in a late rally but Can'thelpbelieving cruised to an easy 1 1/4 length win in 2:14.95. It was a long 3 1/4 lengths back to 14-1 Pumpkin Rumble third. 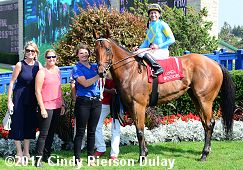 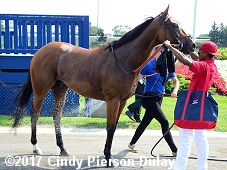 Left: Can'thelpbelieving in the winner's circle. Jane Buchanan, racing manager for trainer Graham Motion said, "You've got a really nice turf program here so I'm sure. We'll just see how he comes back and I'm pretty sure we'll probably reconsider coming back up here."

Right: Can'thelpbelieving gets hosed off after the race. Winning jockey Joe Bravo said, "It makes my job a lot easier when Graham ran the best horse this afternoon. It made my job easy and he's a pro. He's kind of like a barn pet because he has that personality of just ‘laid back, relaxed, takes everything in stride,' but when he needs to he kind of jumps into it like he seemed to at the top of the lane today. Turf racing, is all about position and knowing the animal too. I rode this horse in last year's United Nations (finishing fifth), and I begged to ride him back just because he's a little quirky. All horses you've got to know and I felt that race taught me a lot and it showed today, it made my job really easy." 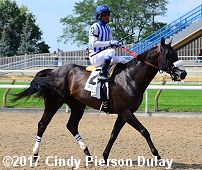 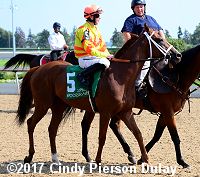