The 82nd renewal of the $500,000 Prince of Wales Stakes, the second jewel in Canada's Triple Crown for 3-year-olds foaled in Canada, was run Tuesday evening at Fort Erie Racetrack over a distance of 1 3/16 miles on the main track. Conditions were nice for late July at the border oval across the Niagara River from Buffalo, NY, with partly cloudy skies and a temperature around 70 drawing a large crowd to enjoy the biggest race of the year at the Fort.

A field of 7 went to post with Aurora Way sent off as the 9-5 favorite off his 9th place finish in the Queen's Plate after winning his debut by 3 lengths. In to challenge him included two horses both bet down to 2-1 second choice, State of Honor, 8th in the Plate after finishing 19th in the Kentucky Derby (G1) and third in the Plate Trial, and Tiz a Slam, the Queen's Plate runner-up.

Jockey Patrick Husbands sent State of Honor to the lead first time by and he set fractions of 23.52, 47.99, and 1:11.37 while pressed by 14-1 Cool Catomine and stalked by Tiz a Slam. Entering the stretch, State of Honor tired allowing Cool Catomine to gain a short lead through 1 mile in 1:36.30. Kept to task by jockey Luis Contreras, Cool Catomine drew off late to win by 2 1/2 lengths over late-running favorite Aurora Way in 1:55.63. It was a neck back to pacesetter State of Honor third. On the clubhouse turn during the runout, Husbands pulled up State of Honor and dismounted, and the horse was vanned back to the barn. 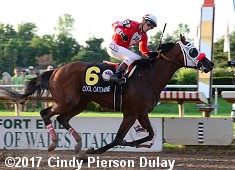 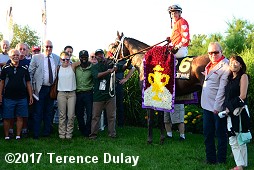 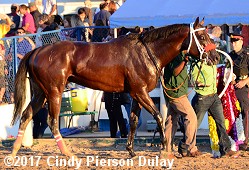 Left: Cool Catomine in the winner's circle. Winning trainer and co-owner John Ross said, “It’s an important moment in my life. This tops it. We ended up coming through today. We’re overwhelmed by it. I love it when a plan comes together. We had some delays earlier on in his career.  We had to find out some stuff about him and I have to commend Luis because he said this horse could use blinkers. So we added them and look how it’s worked out,” continued Ross. “As a two-year-old, we took a lot of time with him. We took him to Florida with a good foundation. All these things and the time we took with him all paid off today.  We could see the horse coming forward in all of his races. We’re counting our blessings today.”

Right: Cool Catomine heads back to the barn after the race. 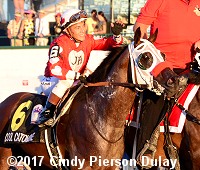 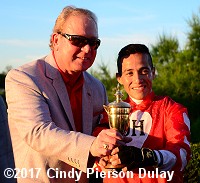 Left: Cool Catomine parades for the fans. Winning jockey Luis Contreras, who also won the Queen's Plate aboard Holy Helena, said, “We come into these races with all the confidence we can. I’m so glad this horse found me and brought us here with this win in Fort Erie.  I had a pretty good trip. He gives you everything he has as long as you keep riding him.” 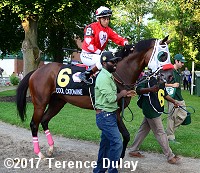 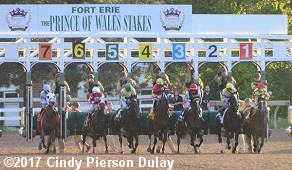 Left: Cool Catomine in the paddock before the race. Ross added, “I love this horse the way he trains. But when he came seventh in his first race, I said to Luis, ‘You know, maybe he’s not the horse I think he is.’ Luis said, ‘No boss, you put blinkers on this horse, this horse is good.’ As soon as we put them on, we found the real deal with this horse.”

Right: The horses break from the gate for the Prince of Wales. Contreras added, “We’ve been breezing on the dirt and he seems fine. After half a mile, I let (Tiz a Slam) go through and I decided to go outside of him. This horse, if you stop riding, he stops running so the whole way I’m keeping this horse alive. I had to work the whole way. At the end I was just hoping to get to the wire first. I heard a horse coming from behind me. I just kept riding this horse. I had a dream trip all the way.” 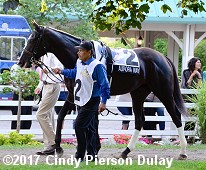 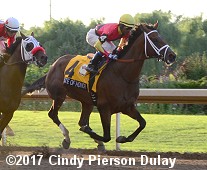 Left: Second place finisher Aurora Way in the paddock before the race. Jockey Rafael Hernandez said, "It's only the third time he's started. Turning for home he was looking everywhere and when I asked him it was hard to get anything going. He's going to run very good in the next couple starts. He's a very good horse. He tried hard to the wire and galloped out great.”

Right: Third place finisher State of Honor leads first time by. He pulled up shortly after the race after taking a bad step and was vanned off, but walked on the van on his own. Jockey Patrick Husbands said, "He ran a good race, but he made a bad step at the eighth pole. They were coming to me but he wasn't letting them by until he made the bad step. He still tried to get second. He tried hard and he wasn't giving up."

The huge ownership group in the winner's circle with the trophies. Ross added, “When you have a horse that’s improving and on the upswing, sometimes you’ve got to have enough courage inside of you to do those things. We (owners) had to put up ($12,500 supplement) in this race just to go into it but because he was doing so well, looking so good, working so good we felt we were going to give it a chance.”

The crowded apron at Fort Erie. "We had a fantastic crowd, perfect weather, and great racing," said Tom Valiquette, chief operating and financial officer of the Fort Erie Live Racing Consortium. "We tried to make the day more of a festival this year by bringing in extra entertainment and food vendors, and it was a success. Our event has been getting better and better every year since moving it to a Tuesday night, and we look forward to building on that momentum next season."