The 76th renewal of the $500,000 Prince of Wales Stakes, the second jewel in Canada's Triple Crown for 3-year-olds foaled in Canada, was run Sunday at Fort Erie Racetrack over a distance of 1 3/16 miles. A field of 7 went to post under sunny skies with temperatures reaching 90 degrees.. Queen's Plate winner Inglorious skipped the race in favor of heading to Saratoga to take on the fillies there in the Alabama Stakes, denying Canada a Triple Crown champion for yet another year. Just 7 entered the race, with Queen's Plate beaten favorite and 7th place finisher Check Your Soul sent off as the 3-2 choice. In to challenge him included 2-1 second choice Bowman's Causeway, fourth in the Plate after finishing second to Check Your Soul in the Plate Trial, and 4-1 third choice Pender Harbour, third in the Plate last out.

As expected, jockey Krista Carignan sent Oh Canada to the lead first time past the stands, and the 12-1 shot set easy fractions of 24.41, 47.85, and 1:12.32 over the fast track while as many as 1 1/2 lengths in front of 5-1 Hippolytus and 25-1 Welloiledmachine who stalked him second and third respectively. Favorite Check Your Soul broke awkwardly, swinging to the far outside and trailed by 6 lengths early on. Entering the stretch, Oh Canada continued to lead through 1 mile in 1:36.90, but Pender Harbour, 4th early, came out 4 wide for room on the turn, followed by Bowman's Causeway. The pair rallied down the center of the course, and in the final strides, nailed the pacesetter for a tight photo. Pender Harbour outfinished Bowman's Causeway by a nose in 1:55.74, and they were 1/2 a length ahead of Oh Canada third. Check Your Soul never recovered from the poor start and finished last beaten 14 3/4 lengths. 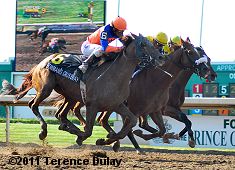 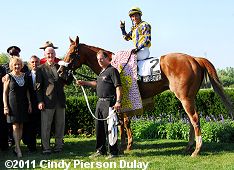 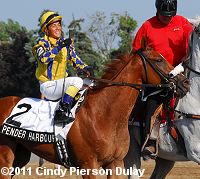 Left: Pender Harbour in the winner's circle. His trainer Mike DePaulo said, "We had some traffic problems in the Plate and wanted Pender Harbour outside and clear of trouble. Luis gave him a great ride and he was clear of trouble every step of the way. We were so happy to have him back in the saddle. This was a genuine victory (compared to winning by DQ in 2006 with Shillelagh Slew). This one was much more rewarding, a win fair and square. My horse showed a lot of heart. This gelding might be one of the best horses I've ever trained." 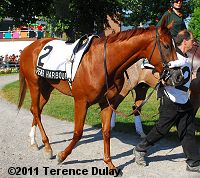 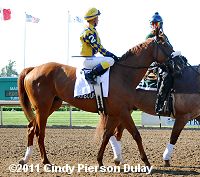 Left: Pender Harbour in the paddock before the race. His jockey Luis Contreras said, "It's amazing. I can't believe it. I just won the Queen's Plate, a big and exciting race for me and then to come back and win the Prince of Wales on a different horse and course. My horse had a clean trip and gave me everything he had. I had a lot of horse at the top of the stretch and felt I would win it. When I turned for home, I saw all kinds of room to spare. But I also heard a lot of horses coming from behind and knew it was going to be a very close finish. (Da Silva aboard Bowman's Causeway) was riding hard and yelling, but it was an exciting finish. I thought he caught me on the last jump." 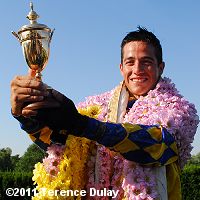 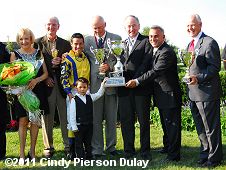 Left: Jockey Luis Contraras poses with the Prince of Wales Stakes trophy. Contreras also won this year's Queen's Plate aboard Inglorious, so if he wins the Breeders' Stakes in 3 weeks time he could be the only jockey to sweep the Canadian Triple Crown aboard different horses, a feat almost accomplished in the U.S. Triple Crown by Calvin Borel in 2009.

Right: The trophy presentation for the Prince of Wales Stakes. Co-owner Bob Giffin said, "I think I helped Luis ride the horse home. He got in the clear on the outside and that's where he wanted to be and he got a good run on the turn heading into the stretch and he rode a strong finish. He's just a wonderful rider. What a day. We're all ecstatic." 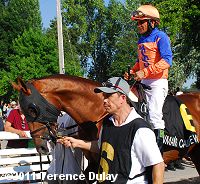 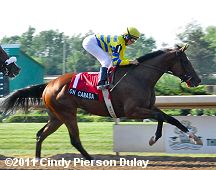 Left: Second place finisher Bowman's Causeway in the post parade. The 2-1 second choice raced 5th about 3 lengths off the pace early under regular rider Eurico Rosa da Silva, rallied well but was nosed out at the line. The Chad Brown trainee improved his record to 1 win, 3 seconds, and 2 thirds in 9 starts, earning $252,465 for owner Martin Schwartz. 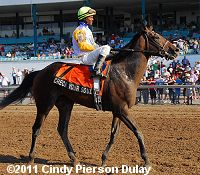 Last place finisher and beaten favorite Check Your Soul returns after the race. The 3-2 favorite broke outward and had to be straightened by regular rider Patrick Husbands, trailed throughout and failed to rally, finishing last beaten 14 3/4 lengths. The Roger Attfield trainee has a record to 3 wins, 0 seconds, and 0 thirds in 6 starts, earning $200,324 for owner-breeder Charles Fipke. 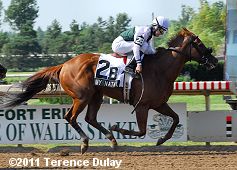 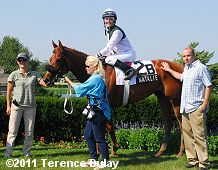 The undercard feature was the $30,000 Fort Erie Slots Cup, a 6 furlong sprint restricted to older fillies and mares who have started at least twice at Fort Erie this season. The two-horse entry of My Natalie and Gee Pari, both owned and trained by Martin Drexler, were sent off as the 1-2 favorites over 9-2 Mountain Echo. My Natalie contested the early lead with 58-1 Lady Celia down the backstretch through a 1/4 in 22.11, but when that horse tired, My Natalie opened up a 2 length lead at the top of the stretch through a half in 45.07. Entrymate Gee Pari, 4th early, moved up to challenge and the pair dueled to the line. My Natalie outfinished her entrymade by 3/4 length in 1:10.28. It was a long 6 lengths back to Mountain Echo third.

Drexler said, "I thought of scratching Gee Pari and I was sitting on the fence for a long time. 'Natalie' has so much more confidence this season and we set her up for this race." 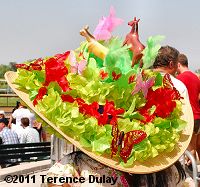 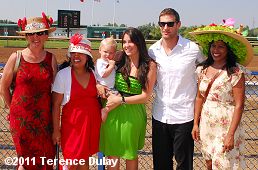 There was a hat contest for the ladies on Prince of Wales Stakes day after the 5th race with a $300 prize to the winner. Rosanna Basheir from Toronto (left) was the winner with her hat decorated with flowers, butterflies, horses, and feathers. To the right are the top three finishers and special guest Dan Girardi of the New York Rangers hockey team with his wife and baby. On the far left is third place finisher Janet Henderson with second place finisher Val Ying next to her, while the winner is on the far right.