Queen's Plate winner Wando moved one step closer to becoming the seventh Canadian Triple Crown winner with an impressive win in the Prince of Wales Stakes at Fort Erie Race Track. Sent off the $0.30-1 heavy favorite, the handsome chestnut son of Langfuhr did not disappoint his backers and led every step of the way, drawing off to win by four lengths in a final time of 1:55.84 for the 1 3/16 miles. Unlike the American Triple Crown, the final leg will be on the turf at 1 1/2 miles in the Breeders' Stakes at Woodbine on August 9th. If Wando can win there, he will take home a bonus of $500,000 and become the first Triple Crown winner since Peteski in 1993.

Light rain fell off an on all day, yielding a muddy but still quick track by post time for the Prince of Wales. Running an almost identical race to his Queen's Plate win, Wando took command right after the start and led the field around in fractions of 22.94, 46.48, 1:10.98, and 1:36.40 before drawing off in the stretch to win easily by four lengths. Shoal Water chased Wando in second until in the stretch where he could not hold off the late kick of Arco's Gold who took second and had to settle for third. Peef, longest shot on the board, rallied up to finish fourth. Solihull, Sonofawac, and Gavro rounded out the order of finish. With the win, jockey Patrick Husbands completed a sweep of all three stakes races on the card at Fort Erie, having earlier captured the Benburb Stakes and the Border Cup Stakes.

To capture the Triple Crown, Wando will have to win the 1 1/2 mile Breeders' Stakes over Woodbine's E.P. Taylor Turf Course on August 9th. He has had experience over the Woodbine turf, finishing a close second in the Grade 2 Summer Stakes last September as a two-year-old. The colt that outfinished him in deep stretch that afternoon, Lismore Knight, has since gone on to win the Grade 2 Arlington Classic on the turf on June 28th, first jewel of the Mid-America Triple at Arlington Park. 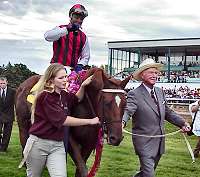 Gus Schickedanz leads Wando to the winner's circle. He said, "The Canadian Triple Crown is on the way", confirming that Wando will definitely contest the Breeders' Stakes rather than go to the Travers at Saratoga. When asked about Wando's stablemate Mobil, who is arguably the better turf horse, possibly going to the Breeders' Stakes as well, he said "I made a promise to myself that I would never race [Wando and Mobil against each other] again. Wando will do the job." 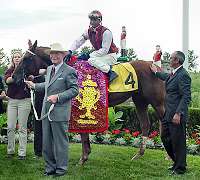 Wando in the winner's circle with Mr. Schickedanz and trainer Mike Keogh. Keogh said, "This was very impressive. He did it very easily. I wasn't sure how he would handle (the muddy track). It was an unknown for us. We just had to take our chances. I've run in this race three times and been second in it twice and finally got it done today so it is a relief for me. It would be nice to win the Triple Crown, for sure." 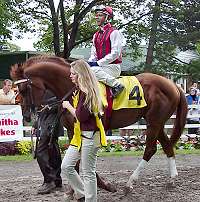 Wando in the walking ring prior to the race. Winning jockey Patrick Husbands said, "I can tell you right now, and I told this to Mike, that I was going to let this horse do whatever he wanted to do. He was enjoying himself. This is a class horse. You could do anything with this horse. He's a simple horse. I ride him twice and let him do what he wants to do. This horse would fit any place right now with three-year-olds. Anywhere in the world, this horse would be there." 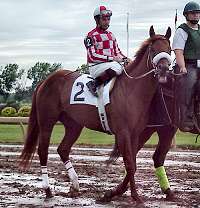 Second place finisher Arco's Gold in the post parade. His jockey Constant Montpellier said, "At one point, I thought I had a chance to catch him, but when Patrick was looking back, I kind of knew I was in trouble. He [Wando] opened up, but [Arco's Gold] came close enough." 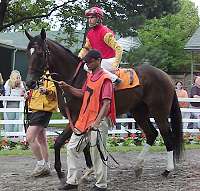 Third place finisher Shoal Water in the walking ring prior to the race. His performance here was also a near repeat of his Queen's Plate race as he again chased Wando and was unable to keep up in the end. 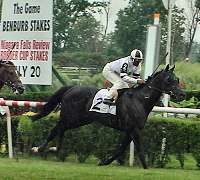 There were two other stakes races on the card at Fort Erie, both at 1 1/16 miles on the turf with one for the males and one for the females. First up was the Benburb Stakes sponsored by The Game which was won by 7-year-old veteran Geraint trained by Catherine Day Phillips and ridden by jockey Patrick Husbands. 7-2 second choice Geraint stalked the early pace early then gunned to the front at the top of the stretch to upset 4-5 favorite Puffer by 3/4 of a length in a time of 1:43.45.
Results chart Race 4 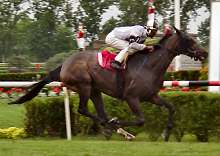 Next up was the Border Cup Stakes sponsored by the Niagara Falls Review. Trainer Catherine Day Phillips and jockey Patrick Husbands teamed up again to win this one with the 5-year-old mare Agolo. Sent off as the 7-4 favorite, Agolo saved ground early staying close to the pace, then drew off in the final furlong to win by 2 1/4 lengths over 9-5 second choice Clubay in a time of 1:43.64 over the firm course.
Results chart Race 6