Local hero Le Cinquieme Essai thrilled the Fort Erie fans by winning their biggest race of the year and the second leg of Canada's Triple Crown, the Prince of Wales Stakes. The chestnut colt by Fastness was coming off a two race win streak, a maiden special weight at Fort Erie and a turf allowance at Woodbine. His name means "The Fifth Try" in French and refers to the trouble his owner had in getting a name approved by the Jockey Club. The first five tries were rejected so he found out the French phrase for the fifth try and it was finally accepted. For the hunch players, it was also Le Cinquieme Essai's fifth career start today. Finishing second was 28-1 longshot Bravely, who had to scratch from the Queen's Plate due to a fever, while Anglian Prince was third. The race was very contentious with the favorite, Shaws Creek, going off at only 4.8-1. Nine of the twelve horses went off at odds of 13-1 or less, showing the bettors really didn't have a good idea who would win.

When the field passed the stands for the first time, as expected Ford Every Stream led the procession with Forever Grand and Le Cinquieme Essai in stalking position to his outside through an initial quarter in 23.01 seconds. Down the backstretch Steven Bahen asked TJ's Lucky Moon to take the lead which he did, getting a head in front of Forever Grand after a half mile in 46.18. But this pace was too quick for him, and after six furlongs in 1:10.33 he began to tire and dropped back. Forever Grand inherited the lead from him at that point with Ford Every Stream continuing to stalk the pace at this late stage and Le Cinquieme Essai back in fifth.

At the top of the stretch, jockey Brian Bochinski asked Le Cinquieme Essai for his run and he responded, passing the early runners to gain the lead with a four wide move. He ran the mile in 1:36.68 and was 1 length clear of Plate runner-up Anglian Prince who had come from as far back as eighth. Anglian Prince could not sustain his bid and finished third beaten nearly one length. Bravely, who had been back in tenth early, came on strong in the far turn between runners, going full out along the rail down the stretch, but was just too late and finished 3/4 length back of the winner. Le Cinquieme Essai finished the 1 3/16 miles over a fast Fort Erie main track in 1:56.53, made more respectable by the fact that he ran four wide around both turns.

Brian Bochinski raises his whip in victory on Le Cinquieme Essai with Bravely and Anglian Prince in close pursuit. Bochinski said: "He was pulling me out of the bridle at the 3/8 pole. I asked him at the top of the stretch and he started running. The home track is definitely a big advantage. He works on it every day."

The start of the Prince of Wales Stakes. 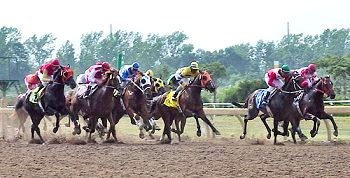 First time by the stands with Queen's Plate winner TJ's Lucky Moon out front. He eventually finished 10, dropping out of contention after 6 furlongs. When his jockey Steven Bahen was asked about how the battle up front cost him, he said: "Probably a lot because we couldn't go as slow as we did in the Plate, and the inside rail wasn't good today and I'm trying to keep him out three off the fence because it looked like that's where they were winning from, but they kind of hounded me and pushed me down in there. I got out to where I was supposed to be but he just couldn't handle the racetrack." 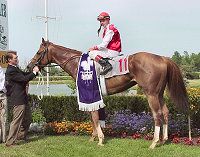 Le Cinquieme Essai in the winner's circle. His owner Bill Scott said: "I tried to name him but I got turned down four times by The Jockey Club, so when the last refusal came in, there happened to be a girl at our house who spoke French so I asked her what "fifth attempt" was in French and she told me "le cinquieme essai" so I put it in and that's how it was." 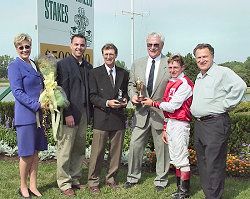 The winning connections pose with the trophies. When asked about his next start, owner Bill Scott said: "I imagine it would be the Breeders' Stakes up at Woodbine, we had him on the turf, he runs on the turf really well. I would say the decision will be made in about ten days." 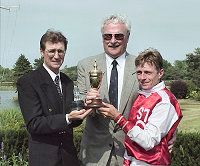 Trainer Paul Neilsen, owner Bill Scott, and jockey Brian Bochinski holding the Prince of Wales Stakes cup. Neilsen said: "This horse is very difficult to train, [exercise rider and former jockey] George Passero does a marvelous job with him in the mornings. Everybody at the barns have done their part, it was totally a team effort, and I want to stress that because it's very important to me." 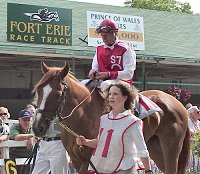 Le Cinquieme Essai and jockey Brian Bochinski in the paddock prior to the race. Bochinski said: "He's not the easiest horse to relax but today actually he relaxed really nice for the first time, so he's showing his maturity." 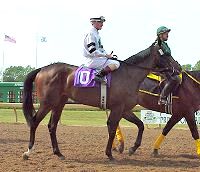 Second place finisher Bravely in the post parade. He was supposed to go in the Queen's Plate but had to scratch the day of the race because of a fever. Jockey Jake Barton said: "I had a decision to make between him and [Queen's Plate mount] Shaw's Creek. I was very fortunate [trainer] Catherine Day-Phillips let me have the mount back after everything. He ran a huge race, we got a pretty good trip on the inside. He gave me everything he had today and I was very pleased." 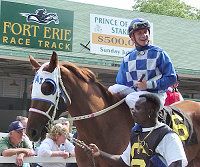 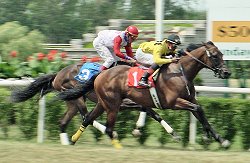 There were two turf stakes on the undercard. First was the Benburb Stakes for the Canadian breds at 1 1/16th miles on the turf. The winner was the favorite, Yatsko in a time of 1:43.23
Results chart Race 4 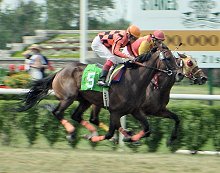 Next was the Border Cup Stakes for the Canadian bred fillies and mares. 4-1 shot Prospective Gal won the 1 1/16th miles on the turf in a time of 1:44.38
Results chart Race 6 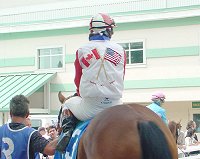 Cross-border solidarity against terrorism was displayed by these "United We Stand" silks.