The 75th renewal of the $500,000 Prince of Wales Stakes, the second jewel in Canada's Triple Crown for 3-year-olds foaled in Canada, was run Sunday at Fort Erie Racetrack over a distance of 1 3/16 miles. A field of 7 went to post under sunny skies with temperatures in the mid 70's. Despite heavy overnight rains, the track dried sufficiently in the morning to be officially fast by the first race of the card. Queen's Plate winner Big Red Mike was sent off as the 9-10 favorite off 2 straight stakes wins starting with the Plate Trial. In to challenge him included 2-1 second choice Hotep, runner-up in both the Marine and the Plate Trial after winning the Wando Stakes, and 8-1 third choice Captain Canuck. Fifth in the Plate Trial last out.

First time past the stands, a three-horse battle ensued for the early lead between Big Red Mike, 13-1 Mobil Unit, and 10-1 Golden Moka, as the threesome ran the opening quarter mile in 23.97. Entering the backstretch, Mobil Unit assumed the lead through a half in 47.12, while Golden Moka pressed the pace from the rail. Jockey Eurico Rosa da Silva took back on Big Red Mike, allowing him to settle third another 1 1/2 lengths behind. Mobil Unit continued to lead into the stretch through 3/4 in 1:11.54 and 1 mile in 1:36.84, but Golden Moka came through on the inside to take over the lead at the 1/8 pole. Kept to task by new jockey Anthony Stephen, Golden Moka drew clear through the final furlong to win by 2 3/4 lengths in 1:56.45 over the "fast" track. It was another length back to favorite Big Red Mike third. This is the seventh consecutive year that the Plate winner failed to win the Prince of Wales. The last Plate winner to win the Prince of Wales, Wando in 2003, went on to sweep the Triple Crown. 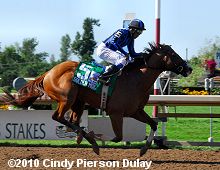 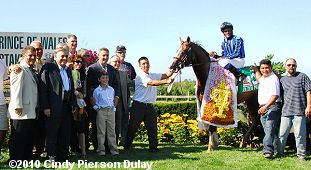 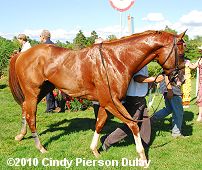 Left: Golden Moka in the winner's circle. Injured jockey Rene Douglas is a member of the ownership group, and is recovering from a riding accident at Arlington Park that may leave him paralyzed. Douglas, at home in his native Panama undergoing stem cell treatments, said, "This horse is going to be something special. I knew it from the beginning."

Right: Golden Moka heads back to the barn after the race. Co-owner Denis Savard, a retired NHL hockey player and now a scout for the Chicago Blackhawks, said, "This is probably the best year of my life. The Stanley Cup in the spring, and now this. I am just a small part of this group but we are all great friends and we all support Rene." Savard believes Douglas will walk again, adding, "It's been tough on us, but he picks us up more than we pick him up. His spirits are great. I believe in fate and I strongly believe that this happened for a reason. I know for sure that we're going to talk about this forever." 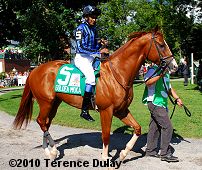 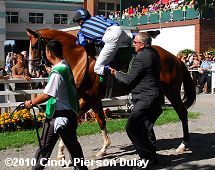 Left: Golden Moka heads out for the post parade. Co-owner Dr. Hilton Gordon added, "Right now (Douglas) is celebrating. This was probably the best moment he's had since his accident. It's been tremendous. It's a fairytale story, no question. It's not going to be an easy go for him, but you can see the spirits are here right now. Let's hope they stay with him and help him through this ordeal."

Right: Trainer Brian Lynch gives Anthony Stephen a leg up on Golden Moka in the paddock. Lynch said, "If I was ever taking a shot with a horse like this, that had not raced in a long time, it would be this horse. He is a very talented horse. He got very sick (after shipping to Canada from Panama) so we missed a lot of time with him. Since he had won three allowance races in Panama, he was not eligible for any easier races here so we took a shot. Rene wasn't involved in watching many races but he took an interest in this horse. He watched the replays over and over again and obviously he had sat on and steered enough good ones that he saw something in the horse that he liked and he put it to the group." 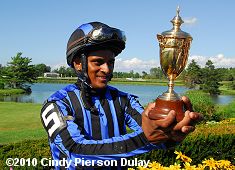 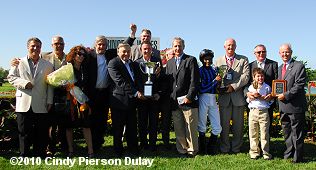 Left: Jockey Anthony Stephen poses with the Prince of Wales Stakes trophy with the lovely Fort Erie infield in the background. Stephen said, "From the day we brought him here to breeze him, he felt like he owned this racetrack. He's a very good horse. The problem is he hasn't run all year and all these horses have been running competitively. In Panama he was only sprinting so we know he's going to be in the front end but can we get him to relax was the question. Today he proved he can relax and he can run all day. From the backstretch once I cleared Big Red Mike, I knew I had it. At the 3/8 pole David Clark started asking (Mobil Unit) but he had no horse left and I was just cruising."

Right: The trophy presentation for the Prince of Wales Stakes. 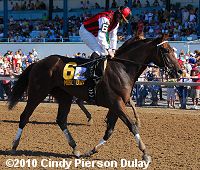 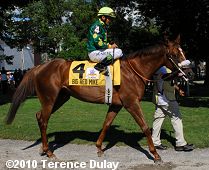 Left: Second place finisher Mobil Unit returns after the race. The 13-1 shot contested the lead around the clubhouse turn under jockey David Clark, led the field down the backstretch, but was outfinished late to finish second. The Mike Keogh trainee improved his record to 2 wins, 2 seconds, and 1 third in 10 starts, earning $234,566 for owner-breeder Gus Schickedanz.

Right: Third place finisher and beaten favorite Big Red Mike in the paddock before the race. His jockey Eurico Rosa da Silva said, "I took him back because I felt I was asking him too much already. I was in a great spot, but it just was not his day today." The 9-10 favorite stalked the leaders in third most of the way about 2 lengths off the pace, but came up empty when asked late, finishing third beaten 3 3/4 lengths. The Nick Gonzalez trainee improved his record to 3 wins, 2 seconds, and 2 thirds in 7 starts, earning $775,881 for owner-breeder Terra Racing Stable. 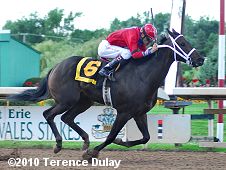 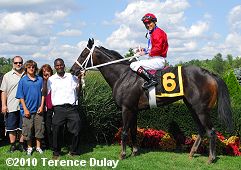 There were two $50,000 stakes races on the undercard originally scheduled to be run on the turf but due to the rains they were moved to the main track. The first of these was the Daryl Wells Sr. Memorial Stakes for Canadian-bred older horses sprinting 5 furlongs. 6-5 favorite Drunken Love stalked pacesetters Stuck in Traffic and Shoteka down the backstretch through an opening quarter in 22.30, then took over the lead on the turn, drawing off late to win by 6 1/4 lengths over 8-5 Legal Move in 56.64 seconds under regular rider Gerry Olguin. It was a head back to 5-1 longest shot Shoteka third. 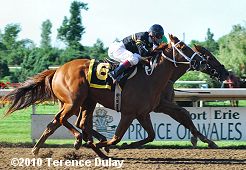 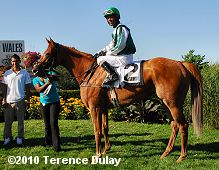 The Ernie Samuel Memorial Stakes featured Canadian-bred older fillies and mares sprinting 5 furlongs. 5-1 Crimson Glory contested the early lead through fractions of 22.15 and 44.94 and opened a length advantage in mid-stretch, but 5-2 second choice Authenicat and jockey Patrick Husbands came through on the inside to get up in a photo finish in 56.95. It was a long 2 3/4 lengths back to 4-5 favorite Bent Attorney third.

The Josie Carroll trainee improved her record to 7 wins, 7 seconds, and 4 thirds in 25 starts, earning $720,697 for owner Vinery Stables LLC.