On Sunday, a field of six 3-year-olds contested the $500,000 Prince of Wales Stakes, the second jewel in Canada's Triple Crown, contested at 1 3/16 miles at Fort Erie Racetrack with each entrant carrying the Triple Crown weight of 126 pounds, the same conditions as the Preakness. Jiggs Coz, third in the Queen's Plate after winning the Plate Trial, was sent off as the lukewarm 2-1 favorite over 3-1 Daaher, shipping in from Saratoga for trainer Kiaran McLaughlin. Queen's Plate runner-up Alezzandro was the 7-2 third choice, with Plate winner Mike Fox all but dismissed as the 4-1 fourth choice. Racing conditions were ideal, with sunny skies and temperatures in the low 70's. This is the first year the Canadian Triple Crown is being contested over three different surfaces, as the Queen's Plate was run over Polytrack at Woodbine, the Prince of Wales is over conventional dirt at Fort Erie, and the third jewel, the Breeders' Stakes, is a 1 1/2 mile turf event at Woodbine.

First time past the stands, Alezzandro was sent to the front by jockey Todd Kabel, and set a slow pace of 23.61, 47.58, and 1:11.78 over the fast track. Emma-Jayne Wilson moved Mike Fox up close to the pace in stalking position just a length behind in second, and Daaher with new rider Mike Luzzi sitting third 2 lengths behind Mike Fox. Favorite Jiggs Coz broke poorly and settled at the back of the pack for the first 6 furlongs, as many as 6 lengths off the leader and wide the whole trip. On the far turn, Kabel asked Alezzandro for run and got it, as Alezzandro pulled away to a 3 length lead in mid-stretch after a mile in a slow 1:36.57. Jiggs Coz came out 7 wide on the far turn and put in a very strong rally but was left with too much ground to make up, as Alezzandro easily cruised to a 1 3/4 length victory in 1:55.04. It was a long 4 1/2 lengths back to Daaher in third, while Mike Fox, who had stalked the pace early, faded in the stretch to finish 1/2 a length behind Daaher in fourth, beaten 6 3/4 lengths. 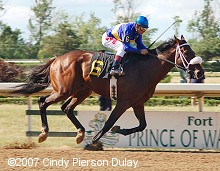 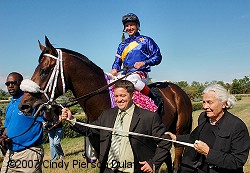 Alezzandro is led to the winner's circle by trainer Kevin Attard and owner Sally Stavro. Attard, celebrating his first Triple Crown race win, said, "Nobody really wanted the lead. (The other jockeys) let us have our way, so we were willing to take it. When he went 23 3/5 and then 47 2/5 I knew we were in a good position and Todd did a wonderful job. It was just a matter of finding out if our horse had it in him. He had trained well heading into this race and I fully expected him to improve off of his last race. It was a perfect ride, we couldn't have asked for anything better. Mike Fox looked like he was struggling around the turn and then I saw Jiggs Coz angling out. He was my biggest threat, but I knew (Alezzandro) would finish well." 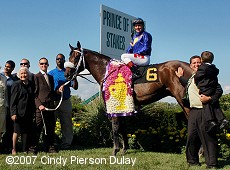 Alezzandro in the winner's circle. His jockey Todd Kabel said, "This is an emotional day, winning this race for (the late) Mr. Stavro and his family. It's like a family thing with me, one year I won the Plate for the late Mr. Samuel, then I won after my father died, and now Mr. Stavro. Our horse stepped up today, well done job by the team. I knew I had it won by the quarter pole, I hadn't asked my horse to run yet, but when we straightened up and I called on him he gave me one big kick and I knew there was no way he was going to get beat today. When they give you a kick like that you better have some kind of horse running awful hard to catch up." 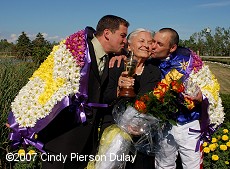 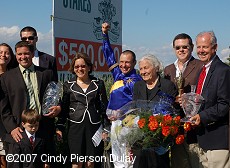 Right: Trophy presentation for the Prince of Wales Stakes. 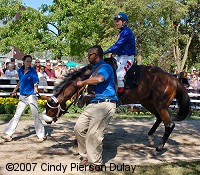 Alezzandro acts up in the paddock before the race. Trainer Kevin Attard said, "In the Plate he just ran out of gas, but that was just his third career start, he's stronger now, he's improving, and everything's falling into place. Todd worked him a lot as a juvenile and last year he told me after a workout, you have a champion on your hands here if you play your card right." Asked if Alezzandro would go next in the Breeders' Stakes, Attard said, "We'll see how he comes out of this race. I think he can handle the turf, but whether he can handle the 1 1/2 miles, that'll be the next step." 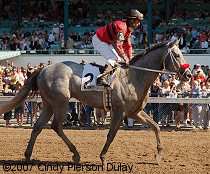 Second place Jiggs Coz returns after the race. 2-1 favorite and runner-up Jiggs Coz was wide around both turns, last for the first 3/4 mile, and closed well to get second money under regular rider David Clark. He improved his career record to 4 wins, 1 second, and 2 thirds in 7 starts with earnings of $533,116 for owner Jim Dandy Stable and trainer Sid Attard, uncle of winning trainer Kevin Attard. 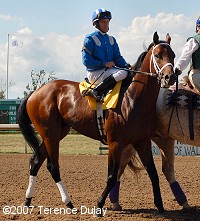 Third place finisher Daaher in the post parade. 3-1 second choice Daaher stalked the pace in third the whole way under Mike Luzzi but could not improve his position, finishing third beaten 6 1/4 lengths. He improved his career record to 1 win, 0 seconds, and 1 third in just 4 career starts with earnings of $136,400 for owner Shadwell Stable and trainer Kiaran McLaughlin. McLaughlin's assistant Arthur Magnuson was the trainer of record for the race as McLaughlin was serving a suspension when entries were taken. 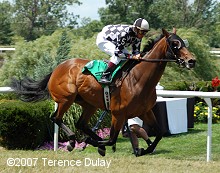 There were two stakes races on the undercard, each contested at 5 furlongs on the turf with a purse of $50,000. Kicking off the stakes action on Prince of Wales Day was the Ernie Samuel Memorial for Canadian-bred older fillies and mares. 4-5 favorite Bosskiri settled well off the early pace of 5-1 Flashy Pink, then gained ground 3-wide on the turn and powered by the balance of the field through the final 3/16 mile to win going away by 2 lengths under jockey David Clark in a time of 57.33 over the very firm turf course. Flashy Pink was second and 23-1 longest shot Timely Matter was third.
Results Chart from Equibase 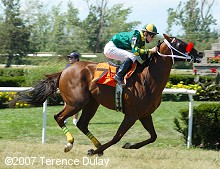 The Daryl Wells Sr. Memorial featured a field of nine Canadian-bred older horses. 3-10 favorite Marco Be Good stalked the pace of 26-1 outsider Golden Ice down the backstretch through a quarter in 22.25, and then came out 3-wide to pass the pacesetter with 70 yards to go to win by 1 1/2 lengths in 57.04 seconds under new rider Emma-Jayne Wilson. It was another length back from Golden Ice to 18-1 Vintage Year in third.
Results Chart from Equibase