In the 69th edition of the Prince of Wales Stakes, Queen's Plate winner Niigon and runner-up A Bit O'Gold went to the gate in the rubber match of their short rivalry. A Bit O'Gold took the Plate Trial but Niigon turned the table at the Plate. In each case they were both lengths ahead of the rest of the field, clearly the class of this year's Canadian-bred sophomore crop. A field of seven went to the post for the 1 3/16 mile contest over Fort Erie's sloppy main track, doused by passing thunderstorms earlier in the afternoon, seeking the winner's share of the $500,000 total purse.

When the field got underway, 1.25-1 second choice Niigon and 19-1 longshot One To Celebrate went straight to the lead and battled on the front end over a quarter mile in 23.52 and a half in 47.79, before One to Celebrate backed off, unable to continue the quick pace over the tiring surface, and faded to an eventual last place finish. Niigon held the lead around the far turn, through six furlongs in 1:12.49 and a mile in 1:37.75. By this point, 1.15-1 favorite A Bit O'Gold had swung wide around the turn and drew even with his nemesis inside the furlong pole. Despite a rough stretch duel where Niigon bore out and bumped into A Bit O'Gold twice, pushing him out to the center of the track, A Bit O'Gold still managed to prevail at the wire a head in front after completing the distance in 1:57.69. Showing just how much these two stand out over their classmates, it was a whopping 15 3/4 lengths back from Niigon to 21-1 longshot His Smoothness in third, and another 1 3/4 lengths from him back to 12-1 shot Just In Case Jimmy in fourth.

As usual, click the small photo to see a larger version. 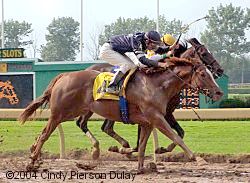 A Bit O'Gold on the outside just gets his head in front of Niigon after an extended stretch duel. Winning jockey Jono Jones said, "My horse fought gamely and caught him this time. I know my horse is a fighter and when he got his head in front I knew he wasn't going to give it up. Obviously he liked the (wet) track." 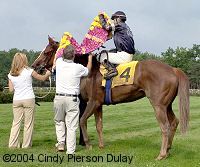 Putting the blanket of flowers on A Bit O'Gold. Asked to compare his Plate loss with his Prince of Wales win, jockey Jono Jones said, "In the Queen's Plate I think we got back a little bit in the first turn and I was further back of the winner than I should've been on the backside. This time, I had him a little closer in my range. I was very frustrated after the Plate. I didn't feel like talking because I knew I made a stupid mistake. The backstretch here (at Fort Erie) is longer (than at Woodbine). I wanted to keep my horse closer because I know he's a fighter." 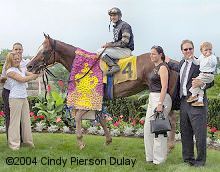 In the winner's circle. Winning trainer Catherine Day-Phillips (to the right in the black shirt) said, "He just has a tremendous heart, all of us at the barn and the owners are so proud of him. He just ran a great race today, he was super. He kept digging in and he got there." 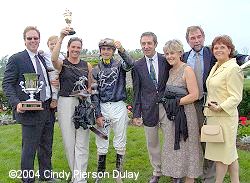 The happy connections in the winner's circle. Whe asked if she would send him to the Breeders' Stakes, the third leg of the Canadian Triple Crown to be run in three weeks time, trainer Catherine Day-Phillips said, "I think we'll just evaluate how he comes out of this race and go from there. I'll maybe breeze him on the turf, see if he likes it." 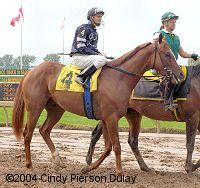 Eventual winner A Bit O'Gold in the post parade. Trainer Day-Phillips said, "When Niigon opened up at the 3/8 pole I thought it was game over. But this horse has a tremendous heart. We always felt he really liked the mud. I wasn't too worried until (Saturday) when we came down and the track was sort of drying out, it was quite mucky and he didn't take to it at all and I thought, 'Oh boy, we're in trouble.' But it was fine today." 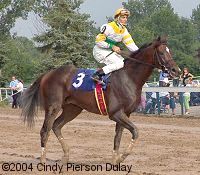 Second place finisher Niigon returns after the race. His trainer Eric Coatrieux said, "He came back on again at the end of the race, he's going to be alright." Asked if he will go in the Breeders' Stakes, "As far as now I don't think so but you never know, it can always change. It's on the grass, I don't think he should go on the grass so soon. As a four-year-old, yes, but it's a bit too early to do this to him. He's going to be an extremely good horse at four."

Jockey Robert Landry said, "I inherited the lead and I was by myself for a long period of time and he kind of lost a little focus inside the eighth pole. Then, when Jono came up to him, he jumped back on the bridle, but Jono's horse had a little bit more momentum at the time." When asked about Niigon drifting out, he said, "I was coming out to (A Bit O'Gold), so my horse would be able to see him and compete. " 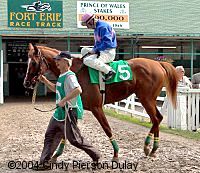 Third place finisher His Smoothness, who was fifth in the Queen's Plate, in the paddock before the race. 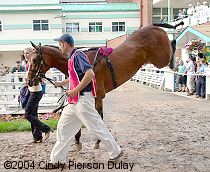 Fourth place finisher Just In Case Jimmy kicks up his heels as he enters the paddock. He also finished fourth in the Queen's Plate. 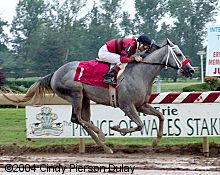 Two $100,000 stakes races were on the undercard. Both were originally scheduled for 1 1/16 miles on the turf but because of heavy rains all week and further rains on race day, both were moved to the main track. Only four of the original nine entrants for the Ernie Samuel Memorial Stakes went to post, with 2-5 favorite Ginger Gold taking the lead on the far turn and drew away to win by 13 lengths over 5-2 second choice Clubay, in 1:49.11 over a sloppy track. The $64,000 winner's share made Ginger Gold racing's newest millionaire in earnings.
Results Chart from Equibase. 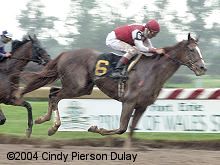 The International Turf Cup was run during a passing thunderstorm, while the track was still listed as fast. 2002 Prince of Wales Stakes winner and champion 3-year-old Le Cinquieme Essai drew away in the stretch to win by 1 1/4 lengths as the 2-1 second choice, in 1:45.57. Just Watch Me was second while 3-2 favorite Longship finished third.
Results Chart from Equibase.