The $500,000 Prince of Wales Stakes at Fort Erie is the second jewel in Canada's Triple Crown, a 1 3/16 mile trip around the main track. Seven of the eight 3-year-olds in the field made their last start in the Queen's Plate. Interestingly, Queen's Plate winner Edenwold was dismissed by the bettors as the 4-1 fourth choice. Instead, Plate runner-up Sterwins was the 9-5 favorite over 3-1 Malakoff and 7-2 Shillelagh Slew. Two of the riders, Ray Sabourin aboard 14-1 Pipers Thunder and Patrick Husbands aboard 34-1 outsider Royal Challenger, had mounts in a stakes race at Woodbine earlier in the day and flew in for the race by helicopter. The race was conducted under record temperatures and sunny skies, with the mercury topping 90 degrees and the humidity making it feel even hotter.

When the gate opened, 44-1 longest shot Cifercat went to the front right away and took the rail trip around the clubhouse turn through an initial quarter in a quick 22.37, with favored Sterwins joining him on the pace just to his outside. Down the backstretch, Cifercat dropped out of contention allowing Sterwins to take the lead through a half in 45.43 and 3/4 in 1:09.85 as Pipers Thunder moved in to press the pace around the far turn. The field appeared to bunch up with 5/16 of a mile to go, and a cavalry charge ensued at the top of the stretch. Sterwins tired after running a mile at such a quick pace, setting the race up for the closers. Malakoff and Shillelagh Slew, who had raced near the back of the field early, made very wide bids on the turn, battled late, but Malakoff shook him off inside the 1/16 pole to finish 1 1/2 lengths clear in a time of 1:55.87. It was a length back to another closer, Pipers Thunder in third.

However, as the field had barely slowed to a stop to be walked back to the unsaddling area, the stewards had already turned on the Inquiry light on the toteboard. The stretch run was being reviewed on tape. Meanwhile, jockeys Dino Luciani aboard Shillelagh Slew and Emile Ramsammy aboard fifth place finisher Edenwold both lodged claims of foul against first place finisher Malakoff. After a lengthy inquiry, the stewards disqualified Malakoff and placed him fifth behind Edenwold. Malakoff bore in badly through the stretch run, and a chain-reaction ensued which ultimately involved Edenwold who was making headway on the rail until his momentum was disrupted. 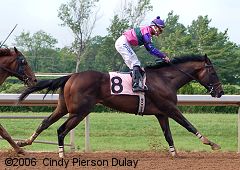 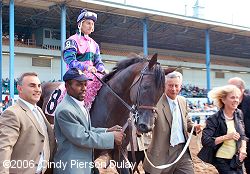 Shillelagh Slew heads for the winner's circle led by his trainer Michael DePaulo, groom, and owners David and Susan James. Winning jockey Dino Luciani said, "When we turned for home my horse started digging back in once Todd (Kabel) got by me, it just cost my horse momentum. I had to check him, switch paths, get him going again and try go around everybody. There was a lot of screaming out there (between the jockeys) but I was in the middle of it all, there was nothing I could do. It was a chain reaction. There was no doubt in my mind he was coming down. This isn't the way you want to win, I'd rather win by 10 lengths going away, but definitely we'll take it. This is a really really nice horse and his best is yet to come. Mike (trainer DePaulo) did a great job with him." 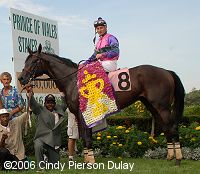 Shillelagh Slew in the winner's circle. Winning trainer Mike DePaulo said, "Without a doubt this is a great horse. Rough circumstances but we'll take whatever they give us. The race kind of ran funny. We were closer than we hoped to be, but I left it up to Dino and it worked out. He made a big move, hung a little, and came back again. I felt bad for (Brian Lynch, trainer of Malakoff), it's racing luck, but he was a gentleman, very gracious about it." 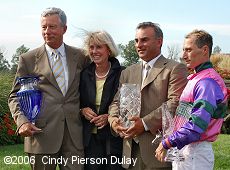 Owners David and Susan James, trainer Michael DePaulo, and jockey Dino Luciani with the trophies. Winning owner David James said, "I was excited because he was possibly going to win, and I was happy with him finishing second, then Mike told me that he thought he was interfered with and we might win this." Asked how the horse was named, he said, "He's named after a town in Ireland called Shillelagh, and his sire is Chief Seattle who's a Seattle Slew, so the name worked." 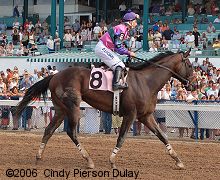 Shillelagh Slew returns after the race. Trainer Mike DePaulo confirmed that Shillelagh Slew will go next in the Breeders' Stakes, the third jewel in the Triple Crown, citing his horse's turf breeding. "He won his very first race, which was on the turf, he's out of a Theatrical mare and he's Seattle Slew (line) which usually do well on turf." 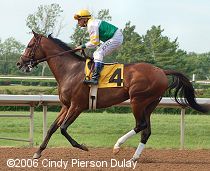 Second place finisher after the disqualification Pipers Thunder in the post parade. 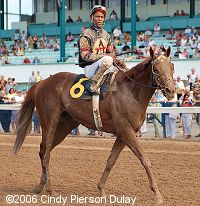 Third place finisher after the disqualification Royal Challenger returns after the race. His jockey Patrick Husbands is watching the replay of the foul on the big TV in the infield as they come back. Business manager Mike Rogers of owner Stronach Stables joked, "Our other horse ran a good race too, Royal Challenger. He got moved up to third so I guess that is a positive." 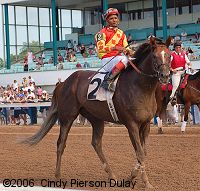 Fourth place finisher after the disqualiication and winner of the Queen's Plate Edenwold returns after the race. His jockey Emile Ramsammy is also watching the reply and doesn't look too happy about how the race went. 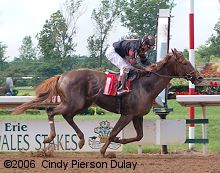 Malakoff crossing the finish line first before being disqualified to fifth place for interference. He came in during the stretch drive and impeded almost everyone else. This spawned a steward's inquiry and two objections, so it isn't surprising he was taken down. Business manager Mike Rogers of owner Stronach Stables said, "Tough break on the call by the stewards but that's racing. He made a big strong move and he sustained that move the whole way, he was definitely ready to run today. I thought we were clear when he came in. (Malakoff) didn't touch anyone and our rider (Kabel) said we were clear. We dropped to fifth so they blamed us for the whole thing." They may wind up appealing the decision but have 48 hours to decide. 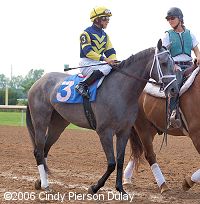 Beaten favorite and seventh place finisher Sterwins in the post parade. He set some very fast fractions going the first 3/4 in 1:09.85, then started dropping back out of contention. 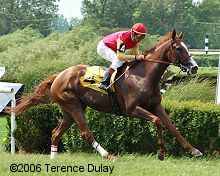 On the undercard of the Prince of Wales was the $75,000 Ernie Samuel Memorial Stakes for older fillies and mares at 1 1/16 miles on the turf. 9-10 favorite See The Wind took over the lead from early pacesetter Can't Buy Class after a half in 46.97, then drew off through the stretch to win by 2 lengths in a time of 1:43.92 over the firm course. Winning owner Tammy Samuel-Balaz of Sam-Son Farms and daughter of the late Ernie Samuel said, "We love coming back to Fort Erie, it's a nice track with a nice turf course, and to win the race named after Dad was something special."
Results Chart from Equibase