The $500,000 Prince of Wales Stakes, the second jewel in Canada's Triple Crown for 3-year-olds foaled in Canada, was run Sunday at Fort Erie Racetrack over a distance of 1 3/16 miles. A compact field of just six 3-year-olds went to post on a perfect day for racing with sunny skies and temperatures around 70 degrees. Woodbine Oaks winner Milwaukee Appeal was sent off as the 7-5 favorite as the lone filly in the field, exiting a third place finish in the Queen's Plate last time out. Queen's Plate Stakes winner Eye of the Leopard was the 9-5 second choice, coming into this race off three straight wins. Mr. Foricos Two U, second in the Plate after leading at every call, was the 5-2 third choice on the board.

Jockey Stewart Elliott sent Milwaukee Appeal to the lead first time past the stands, and she got the initial quarter mile in 24.80 before 16-1 Gallant took over the lead on the clubhouse turn. Gallant opened up a 1 1/2 length advantage on the filly on the backstretch through a half in a slow 49.10. Milwaukee Appeal closed the gap and the pair battled on the lead through 3/4 in 1:12.94 and a mile in 1:37.68. They continued to fight the length of the stretch and hit the line together in 1:56.74 over the fast main track. The stewards took ten minutes to examine the photo finish before declaring Gallant the winner by a nose. It was 1/2 a length back to Eye of the Leopard third. 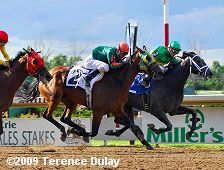 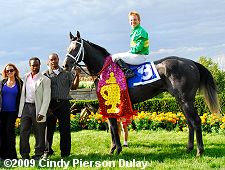 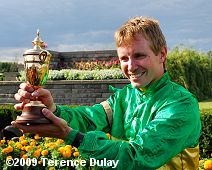 Left: Gallant in the winner's circle.

Right: Jockey Corey Fraser with the Prince of Wales Stakes trophy. Fraser said, "The pace was slow, and he came to the front and I get him go, I let him run. I had a lot of horse left. At the 1/4 pole, I said 'Let's go, let's bring it on.' Milwaukee Appeal passed us, I said 'no, no, no' and I asked him for more. He dug down and he gave it. This is just like a dream. I hit the wire and it was a dream. I thought I won it but I tried not to think too much in case that was a jinx. When (the photo) was taking a long time I was thinking it was a dead heat and I was going to be just as happy with that. But I was dying on the way back just to find out." 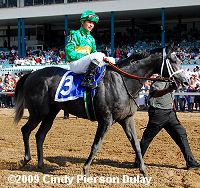 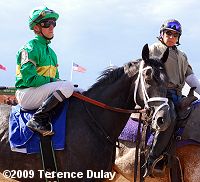 Left: Gallant circles while they wait for the photo finish to be decided.

Right: Gallant in the post parade. His trainer Mark Casse, who was not at Fort Erie but watched the race from the Finish Line Bar at Woodbine Racetrack, said by phone, "I (skipped the Queen's Plate) on purpose. I thought if this horse had any shot at being successful, he could be the only fresh horse in the Prince of Wales field. I figured everybody had beat each other up in the Queen's Plate. We needed our horse to run his best race, and some of the others not to run their best. This horse is really bred for the dirt. He beat some nice horses today. I thought the filly ran a gallant race, no pun intended. She's been through a lot and she showed a lot of class and determination." 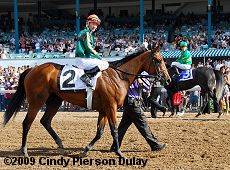 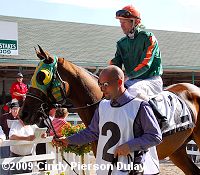 Left: Second place finisher and beaten favorite Milwaukee Appeal circles while waiting for the results of the photo finish. The 7-5 favorite went to the lead under regular rider Stewart Elliott, backed off entering the backstretch, then battled with the eventual leader the rest of the way, losing by less than an inch at the line. The Scott Fairlie-trained daughter of Milwaukee Brew out of Open Forum mare Appealing Forum improved her record to 5 wins, 2 seconds, and 3 thirds in 11 starts, earning $859,538 for owner-breeder C.E.C. Farms.

Right: Milwaukee Appeal in the paddock before the race. 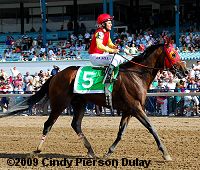 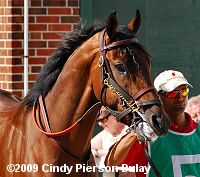 Left: Third place finisher Eye of the Leopard returns after the race. The 8-5 second choice and Queen's Plate winner stalked the pace in third or fourth under regular rider Eurico Rosa da Silva never more than 3 lengths off the pace, then put in a rally on the outside but came up 1/2 a length short of the lead pair. The Mark Frostad trainee improved son of A.P. Indy out of the Smart Strike mare Eye of the Sphynx improved his record to 3 wins, 0 seconds, and 1 third in 5 starts, earning $785,540 for owner-breeder Sam-Son Farms.

Right: Eye of the Leopard heads into the paddock before the race. 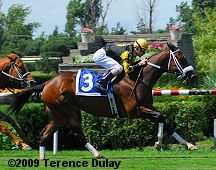 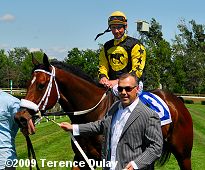 There were two $50,000 stakes races on the undercard. The first of these was the Ernie Samuel Memorial Stakes for Canadian-bred older fillies and mares sprinting 5 furlongs on the turf. 9-10 favorite Dancing Allstar led the field down the backstretch and around the turn through quick fractions of 22.27 and 45.53, but 5-4 second choice Bent Attorney, who stalked her in second early under new jockey Stewart Elliott, closed on the outside, taking over the lead at the 1/16 pole to win by 1 length in 57.41 over the good turf. It was a long 5 1/4 lengths back to 5-1 third choice Klissura third. 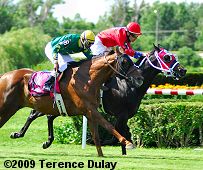 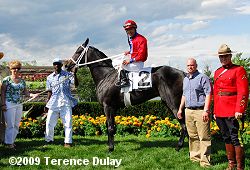 The Daryl Wells Sr. Memorial Stakes featured Canadian-bred older horses also sprinting 5 furlongs on turf. 15-1 Marco Be Good opened up a 2 length advantage down the backstretch through fractions of 22.48 and 45.79 over the good surface, but 6-5 favorite Drunken Love, fourth early under new jockey Gerry Olguin, came through on the hedge late to get up by a head in 57.81. It was just 1/2 a length back to 7-1 No Dilettante third.

The Norm McKnight trainee improved his record to 6 wins, 6 seconds, and 2 thirds in 17 starts, earning $361,233 for owner Tally-Ho Racing Ltd.