Sunday, the $500,000 Prince of Wales Stakes, the second jewel in Canada's Triple Crown for 3-year-olds foaled in Canada, was contested at 1 3/16 miles at Fort Erie Racetrack with each entrant carrying the Triple Crown weight of 126 pounds. As expected, Not Bourbon was sent off as the 11-10 favorite in the 7-horse field, entering the Prince of Wales off a three-race win streak including the Queenston, Plate Trial, and the Queen's Plate in his last start 3 weeks ago. In to challenge the Roger Attfield trainee was Withers Stakes winner Harlem Rocker at 6-5, who was a disappointing fourth in the Plate Trial last time out. His connections decided to skip the Plate for this spot given that he did not take to the Polytrack at Woodbine. The rest of the field were at double digits, let by 11-1 third choice Deputiformer, fourth in the Plate last time out and winless since the Cup and Saucer last October on the turf. Overnight rains resulted in a muddy track for the undercard but thanks to sunny skies, a stiff breeze, and temperatures in the mid 70's, the track quickly dried up through the day and was listed as fast for the main event.

When the gate opened, jockey Richard Dos Ramos sent 23-1 Pewter to the front and he was immediately hooked by 37-1 longest shot Pronger first time past the stands, through an opening quarter mile in 24.09. Pronger dropped back as 13-1 Sebastian's Song was hustled up to move alongside Pewter, as they led the pack down the backstretch getting the half in 47.40 and 3/4 in 1:11.98, with Not Bourbon looming large to their outside most of the way. Turning for home, Pewter tired badly and dropped back to eventually finish last. Jono Jones asked Not Bourbon for run but the Plate winner did not show his usual kick. Eibar Coa aboard Harlem Rocker, who settled in fifth early, came wide into the stretch to take over the lead at the 1/4 pole. 21-1 East End Tap, who was near the back of the field early, put in a good rally himself and got within half a length of Harlem Rocker, but the Frank Stronach homebred easily dismissed that challenge, pulling away through the final furlong to win by 1 1/4 lengths in 1:56.46 over the fast track. It was a long 3 3/4 lengths back to Pronger third, while favorite Not Bourbon tired badly through the lane to finish sixth. 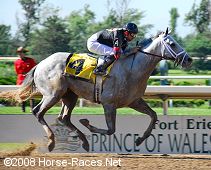 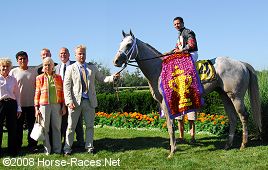 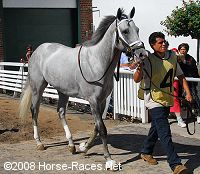 Left: Harlem Rocker in the winner's circle with Andy Stronach holding the lead and his mother Elfrida Stronach next to him. Andy, son of owner-breeder Frank Stronach and the pedigree expert for his father's Adena Springs Farm, said, "Right after the Plate Trial we came back (to Belmont Park) and trained on dirt. You have to get used to the surface." Asked if Harlem Rocker would contest the Breeders' Stakes on the turf in 3 weeks, Stronach said, "I'm not saying he's really bred to be a true 1 1/2 mile grass horse. If you run a horse (in a race) he's not really suited for, then you can whack him out. Today, horses aren't as sound as they used to be and not everybody does every dance" Stronach said that Harlem Rocker would be pointed to the Pennsylvania Derby.

Right: Harlem Rocker enters the paddock before the race. 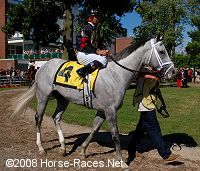 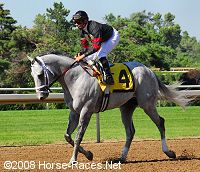 Left: Harlem Rocker in the paddock before the race. Winning jockey Eibar Coa said, "I just believe the last time he didn't care for Polytrack. He proved today he was back. I was never worried about anything. I didn't care about how fast they were going to go. I had my plan, it was no worry at all. I was watching (Not Bourbon) the whole way. (Not Bourbon) was still between horses and kind of fighting his way through so I made the decision to try and get the jump on him. Coming to the 3/8 pole I was trying to point (Harlem Rocker) outside because I had to make sure I had a clear spot. He didn't lose the lead (in mid stretch), but (East End Tap) got very close to me, maybe 1/2 a length. That was when (Harlem Rocker) realized he had to start running, and he just took off again. At one point he slowed down so much that it allowed that horse to get close to him. He hates to be in front so that's why he waited. As soon as I asked him he just proved how good he is. When he's on his game, he's just way better than these horses."

Right: Harlem Rocker takes off to warm up after the post parade. 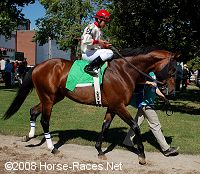 Second place finisher East End Tap in the paddock before the race. The 21-1 shot was last down the backstretch under new jockey Elvis Trujillo, moved up on the leaders on the far turn and challenged Harlem Rocker briefly before the winner drew off. The Reade Baker trained son of Pleasant Tap improved his record to 1 win, 3 seconds, and 0 thirds in 8 starts, earning $175,680 for owner Sheik Yobuti Racing Stable. 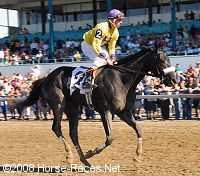 Third place finisher Pronger returns after the race. The 37-1 longest shot on the board pressed the pace in fourth early under new jockey Chad Beckon, came out four wide for the drive and improved his position late, finishing third beaten 5 lengths. The Mike DePaulo trainee improved his record to 1 win, 1 second, an 2 thirds in 9 starts, earning $112,800 for owner Mario Forgione. 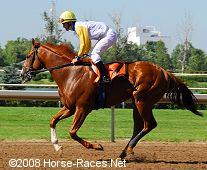 Sixth place finisher and beaten favorite Not Bourbon during the post parade. The Charles Fipke trainee raced close to the pace for the first mile, then tired at the 3/16 pole and faded to finish next to last under regular rider Jono Jones, 9 1/4 lengths back of the winner. His trainer Roger Attfield said, "I thought he saddled much too quiet, to be honest with you. I was really kind of upset that he wasn't getting hot because that's his norm to get warm. Then Jono (Jones) said he never settled in the race at all. At the 5/8 pole he settled some for him but when he asked him he didn't get that fire. And he finished a very tired horse, no question. All I know is I got humbled. That's why you don't say too much and be vocal going into a race, because quite often you'll get kicked in the backside." 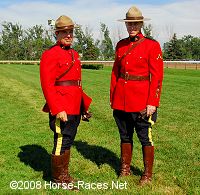 Left: The Royal Canadian Mounted Police always have a couple of representatives at the Prince of Wales Stakes. Here they are on the turf course after the big race.

Right: Silver Elvis was performing outside in front of the slots building. 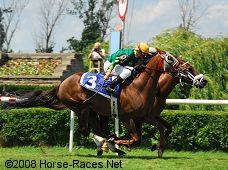 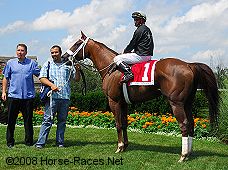 There were two turf sprint stakes races on the undercard. The first of these was the $50,000 Daryl Wells Sr. Memorial Stakes, featuring a field of six Canadian-foaled older horses going 5 furlongs on the turf. 5-2 second choice Stonetown opened up a 2 length lead down the backstretch under new jockey Chris Griffith, getting quick fractions of 22.89 and 46.31 over the good turf course. 6-5 favorite Marco Be Good moved up alongside the pacesetter for the drive and the pair battled the length of the stretch, hitting the wire together in a photo finish. Stonetown got his nose on the line first, completing the trip in 58.14 seconds. It was 2 lengths back to 4-1 third choice Neil the Knife third. The Noel Randall trained son of Elajjud improved his record to 7 wins, 0 seconds, and 1 third in 14 starts, earning $287,682 for owner Winston W. Penny. 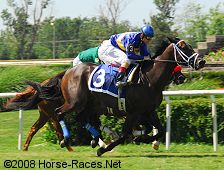 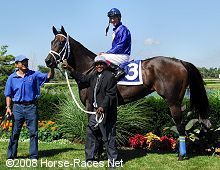 The $50,000 Ernie Samuel Memorial Stakes featured a field of nine Canadian-foaled older fillies and mares sprinting 5 furlongs on the turf. 5-2 second choice Klissura settled in third off the pace set by 7-1 Archers Dream through fractions of 22.23 and 45.99 under new jockey Jerry Baird, then came three wide into the stretch, closing well to nail the pacesetter in the final strides, getting the 1/2 length win in 58.43 over the good turf course. It was just a neck back to late-running 6-1 Miss Terra in third. The Kevin Attard trained 5-year-old mare improved her record to 2 wins, 3 seconds, and 2 thirds in 13 starts, earning $126,053 for owner-breeder Knob Hill Stables.