On Sunday July 22, Fort Erie hosted the 66th running of the second jewel in Canada's Triple Crown -- the Prince of Wales Stakes. In this edition, the connections of Win City set out to avenge their bitter defeat in the Queen's Plate at the hands of the regally-bred filly Dancethruthedawn. These two were sent off as 2.10-1 co-favorites. Brushing Bully, Asia, and Thatsthebottomline, who also competed in the Plate, were back again trying to spoil Dancethruthedawn's chances, as was H. James Bond trainee Wild Years who shipped in from Belmont Park off a gate to wire 22 1/4 length win in a 1 1/8 mile maiden race last out.

As expected, Richard Migliore sent 1.35-1 favorite Wild Years out to the front immediately in the field of six, with Dancethruthedawn stalking him the whole way, setting initial fractions of 23.53, 47.11, and 1:11.12. When the field was at the midpoint on the turn, Wild Years proved to be no match and quickly dropped back to a last place finish. Dancethruthedawn, who got by Wild Years easily, drew clear quickly at the top of the stretch after a the mile in 1:36.63, and was clear by as much as 3 1/2 lengths. Win City, who had saved ground early, was asked for his run on the turn by jockey Constant Montpellier and came three wide into the stretch, gaining with every stride. The two hooked up in mid-stretch and dueled briefly, then Win City switched leads with 1/16 mile to go and suddenly accelerated past Dancethruthedawn to win by a half length, stopping the timer in 1:56.14 over the fast track. It was another 7 3/4 lengths back to third place finisher Brushing Bully who had held that position for the entire trip.

Neither Win City or Dancethruthedawn are expected to renew their rivalry in the third leg of the Canadian Triple Crown, the Breeders' Stakes at Woodbine. Trainer Bob Tiller said that Win City is eligible for the Ohio Derby and the West Virginia Derby and may go to one of those next. Mark Frostad said Dancethruthedawn will stick to filly races from now on and is being pointed for the Alabama Stakes at Saratoga. 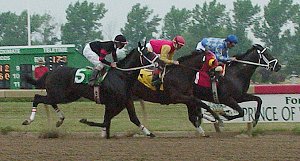 The field passes by for the first time with Wild Years, Dancethruthedawn, and Brushing Bully out front. 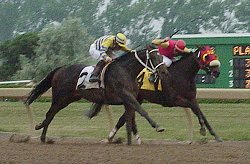 In deep stretch with Win City digging in with each stride trying to run down Dancethruthedawn. Trainer Bob Tiller said: "To get even and beat the filly - I honestly thought she had us beat again today - but Connie rode the perfect race and he was able to run her down. I'm just thrilled. Just before the wire, I thought, 'Geez, he's going to get beat by a half-length, here we go again. Then I saw that kick that I've seen before." 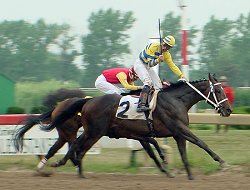 Constant Montpellier celebrates his victory over Dancethruthedawn. After the race he said: "I think we had a good trip today. The filly today was a little closer to the pace, actually fighting with Wild Years, and I was right behind those two, and I was kind of licking my lips. I said to myself: 'You know, I think it's ours today.' I was confident the last few jumps. Around the 16th pole, he was moving and was gaining ground every jump. But I really didn't think we were going to get there. He just showed his class and his guts, like he did in the Plate. It was unfortunate that day. But he wants to win and he did it today." 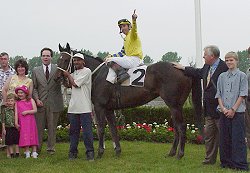 Win City with his connections in the winner's circle. Trainer Bob Tiller said: "I think [Win City] is the best three-year-old in the country. I believe he's good enough to run with the horses down below [the border], up to 1 1/8 miles. On a good day, when there's a lot of speed in the race, watch out." 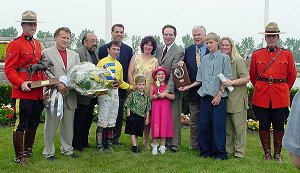 The trophy presentation. Owner Frank DiGiulio Jr. said: "I was silent until the last 70 yards and then I started screaming. I wasn't even sure he won until I saw Constant [Montpellier] raise his hands. He's so consistent and always tries his heart out. He ran a great race in the Plate and just couldn't get there but we're really proud of him today." 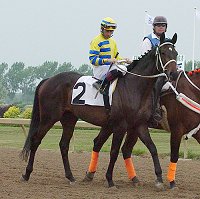 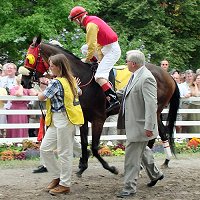 Second place finisher Dancethruthedawn's jockey Gary Boulanger gets a leg up from trainer Mark Frostad. Jockey Gary Boulanger said, "She never saw that other horse coming on the outside. When Win City came to her head, she gave me another gear, but it was too late. If she had kicked through the lane like I thought she could, he never would have got to her." 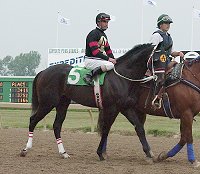 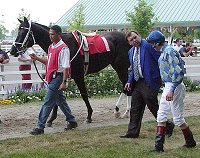 New York invader and post time favorite at 1.35-1 Wild Years in the walking ring with trainer H. James Bond and jockey Richard Migliore discussing strategy. Bond had said before the race the only horse in North America that he feared was Point Given, but Wild Years could not live up to that hype, fading badly to finish last.

The first stakes on the undercard was the Benburb Stakes at 1 1/16 miles on the turf. The winner was Beau Gentleman over Coastal Display and Smoke'n'ashes in 1:43.72. Results Chart 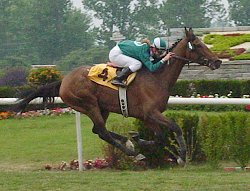 Also on the undercard was the Border Cup Stakes for the fillies which was won by Katsumi over Lewinsky and Classy Pickup in 1:44.17 for 1 1/16 miles on the turf. The winner had to survive a claim of foul by the 3rd place finisher, but the original order stood. Results Chart